Skip to main content
Upload Proof of Vaccination
Reminder: All students, faculty, and staff must be fully vaccinated against COVID-19 and upload proof as a condition of accessing College buildings (including the residence hall) during the 2021-2022 academic year.

Each entrepreneur made it through several rounds of competition to reach the final where they had five minutes to pitch their ideas to a panel of judges in hopes of winning seed money to bring their business plan to life.

The event, sponsored by Investors Bank, included plans for an iPhone-connected razor, a fashion reseller, graveside maintenance, and more.

The St. Francis College Entrepreneurship Club welcomed three current students to talk about their businesses for a Peer to Peer workshop on March 8, 2018.

Sydney Bell '19 (Sydney Bell Photography), Fallon Raimo '18 (Infamous Vigilante), and Josh Dezil '21 (Jdbundles) offered tips on how get a company started, their inspirations and their hopes for the future. Arianna Sartzetakis '19 (Uncover More) moderated the discussion.

Many entrepreneurs rely on the support of various angel investors, but imagine the impact a 'Super Angel' can have on launching and growing your start-up venture? St. Francis College welcomed Rodolfo Bellesi (Co-founder & Principal, Ikove Venture Partners) and Ian Sosso (Founder & Managing Partner, Monte Carlo Capital) to talk about Funding Your Start-Up Venture on January 31, 2018.

The lecture focused on the differences between the start-up ecosystem in the United States and across the Eurozone as well as the role of a Super Angel. President of St. Francis College, Miguel Martinez-Saenz offered opening remarks at the event which is part of the St. Francis College Center for Entrepreneurship's #buildyourBRAND lecture series.

"Unlike the customary VC method of providing substantial funding to a few potential 'unicorns,' the super angel model seeds many high-potential startups with less funding and significant mentoring. During this nurturing process, the super angel determines which start-ups have the highest probability to successfully scale. Super angels are ideal partners for college-based entrepreneurs," remarked President Martinez-Saenz.

The #buildyourBRAND series brings leaders in business and industry to campus to share their expertise with the growing St. Francis College student entrepreneurial ecosystem. Ikove Venture Partners bridges the gap between R&D funding and VC funded rounds by providing not only capital, but also by acting as a "Startup Nursery TM" and installing a multi-layered due diligence process aimed at vetting the most promising technologies and creating the right teams to bring those technologies to market.

Monte Carlo Capital is a group of business angels that has built an ecosystem of active co-investors and experienced advisors. They have a significant deal flow and look to select the best teams with a unique and disruptive business model. MCC has investments in Europe, Asia and North America. They focus on Seed and Series A and typically like to be the lead investor.

Engage with our academic and community partners to grow a collaborative entrepreneurial ecosystem. Foster our students’ efforts to develop an entrepreneurial mindset. Support our students in becoming ethical and socially responsible leaders. Help turn great ideas into great realities.

The Center seeks to create an environment that champion’s creativity and innovation, encourages calculated risk, celebrates critical thinking, energizes the creative spirit, and above all, is infused with social responsibility. We envision the support provided will result in development of sustainable businesses and successful careers informed by the Franciscan tradition.

New York is home to some of the most successful entrepreneurs in the world. Hear their stories and be inspired by their innovation in our Entrepreneur Spotlight Series featured on this site.

Our professors participate or have participated in the following academic organizations and conferences that advance entrepreneurship research and education: 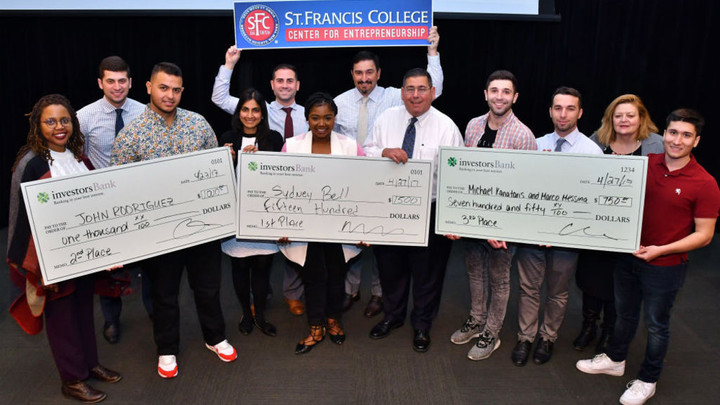 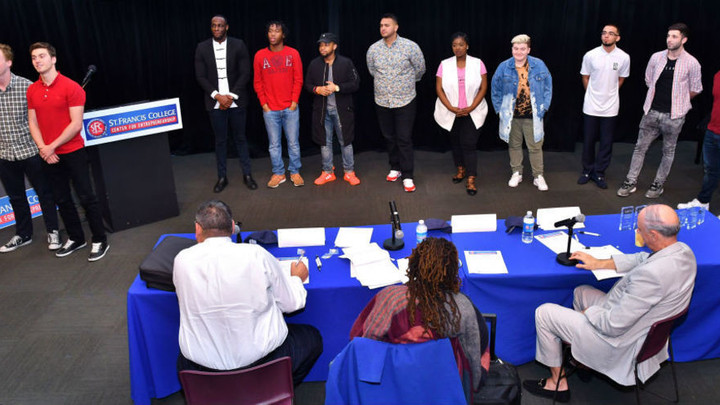 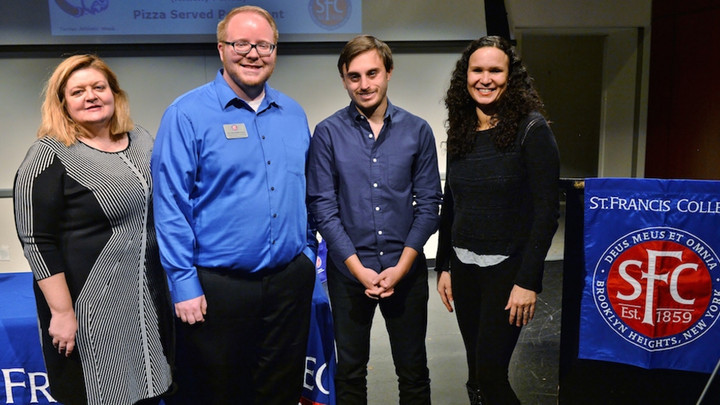 Our center is led by a management team possessing unique qualities and backgrounds that complement each other, and effectively facilitate the Center's day to day operations.

The unique backgrounds of the Center’s leadership and staff ensure the reflection of diverse perspectives on entrepreneurship and operational excellence that will benefit our student body and regional community.

Dr. Dennis Anderson, M. Phil., Ph.D., is Chairman of SFC’s Department of Management and Information Technology and serves as the Center’s founding Director. The initial idea for the center was conceived by Dr. Anderson, who has over 20 years of experience as an academic dean, management and information technology professor, international activist and scholar.

Dr. Anderson has presented at numerous international conferences; received numerous grants, including National Science Foundation grants; served as a reviewer/referee for numerous grants, fellowships, and academic publications. He is a Senior Specialist in information technology for the J. William Fulbright Foreign Scholarship Board, and has served on the advisory boards for several non-governmental organizations (NGOs), entrepreneurial startups, and conferences. Dr. Anderson brings a wealth of experience, keen strategic insight, and the capacity to lead effectively to the Center.

Eda Sanchez-Persampieri, MS, MBA, is Director of the Center for Entrepreneurship and full-time lecturer within SFC’s Department of Management and Information Technology. She has over 20 years of apparel industry sourcing, product development, and production experience including collaboratively launching three lifestyle brands.

Eda publishes frequently on fashion supply chain and sourcing trends, most recently co-authoring an article focusing on the #See-Buy-Wear 2016 fashion runway trend. Her experience as an entrepreneur includes three years as a retail shop owner and eight years as co-owner of a Brooklyn café.

Eda currently mentors small business owners and aspiring entrepreneurs to build and scale their concepts into profitable and sustainable businesses. As an educator, her experience includes teaching human resources, marketing, management, and entrepreneurship courses at the undergraduate and graduate level and within entrepreneurship training programs. She holds a M.S. in Organizational Management, and an MBA, as well as PHR and SHRM-CP certifications. As a passionate Brooklyn community resident, Eda has held leadership roles and served on the boards of several Brooklyn based non-profits.

Mary Gelormino, M.B.A., serves as the center’s Executive in Residence and primary operational manager. Her emphasis is on coordinating and providing strategic direction for the Center’s day to day operations, and developing innovative community programs, partnerships, and events for the Center.

Professor Gelormino has more than thirty years of experience in banking with an emphasis on marketing and new business development in the New York metro.She has served as a Board of Director for many organizations whose mission is to increase economic productivity and social impact. She brings a wealth of corporate intrapreneurial experience to the Center, as well as numerous corporate contacts from within the New York community. Professor Gelormino also serves as an adjunct instructor of Entrepreneurship and has more than twenty years of experience leading seminars and teaching in College.

Professor Gelormino holds a Bachelors of Science and an MBA from New York University, is a graduate of the Stonier Graduate School of Banking and the American Institute of Banking, and is a certified instructor for National Association for Teaching Entrepreneurship.

Katja Schroeder, M.A., is an Adjunct Professor at St. Francis College, where she teaches Social Media Marketing and PR. She is also the owner of Expedition PR, a boutique PR agency that connects market innovators with influencers. She has developed award-winning communications programs for companies of all sizes in North America, Europe and Asia. Before founding Expedition PR, She worked on global client campaigns at Burson-Marsteller and Ruder Finn. While at Ruder Finn she build the technology practice in China from scratch to a profitable new business unit.

Professor Schroeder holds a M.A. in Communications and Business Administration from the Freie Universitaet Berlin (Germany) and a M.A. in Communications and Information Sciences from CELSA/Sorbonne, Paris (France). She is published author and frequently blogs about entrepreneurship and how tech enables sustainable development. Tweet her at @schroek.

Marie Segares, joined the Management and Information Technology department at St. Francis College in January, 2017 as an assistant professor. She is a long-time intrapreneur in the non-profit health and education industries. She has launched or expanded programs in every job she has held during her career. Her experience includes managing a federally-funded public housing community health center for an academic medical center in the South Bronx, co-founding a public high school in Brooklyn, and developing an online, bachelor’s degree completion program for a faith-based college in Texas. She is the daughter of an entrepreneur and the owner-operator of several micro-businesses. Marie earned her AB from Barnard College, her MPH from Columbia University, and her MBA (with concentrations in Leadership & Change Management and Entrepreneurship & Innovation) from New York University.

Dr. Chang Xia, joined the Management and Information Technology department at St. Francis College in Fall 2017 as an assistant professor. She received her Ph.D in economics from the City University of New York in 2016. She studied MFE at New York University, and she has a Bachelor's in Mathematical and Computational Finance from Wuhan University of Technology. Xia works with large datasets in processing and econometric modeling. She has worked as a senior qualitative analyst and previously taught at New York University. Xia is also interested in film editing and has worked on several documentaries. She currently serves as an advisor at No Boundaries International Art Exhibition 2017, which is co-sponsored by the U.N.

Pursue a Minor in Entrepreneurship

Our 15-credit hour program is open to enrolled students of any major, and takes a cross-disciplinary approach to promote innovation and entrepreneurship. Entrepreneurship education enables students to develop skills that are easily transferable to any workplace or business sector.

In our entrepreneurial courses, students learn how to:

Coursework instruction focuses on conceptual understanding of real-world problems or situations. The classroom serves as a venue for experiential learning through direct interaction with our entrepreneurial community and hands-on projects.

Explore Your Opportunities
Pursue Your Passion
Launch and Grow Your Business

Prior to your Innovation Clinic appointment , please complete, as best possible, the attached Business Model Canvas. Please bring a printed copy with you.