Skip to main content
Upload Proof of Vaccination
Reminder: All students, faculty, and staff must be fully vaccinated against COVID-19 and upload proof as a condition of accessing College buildings (including the residence hall) during the 2021-2022 academic year.
In the Spotlight
November 10, 2020 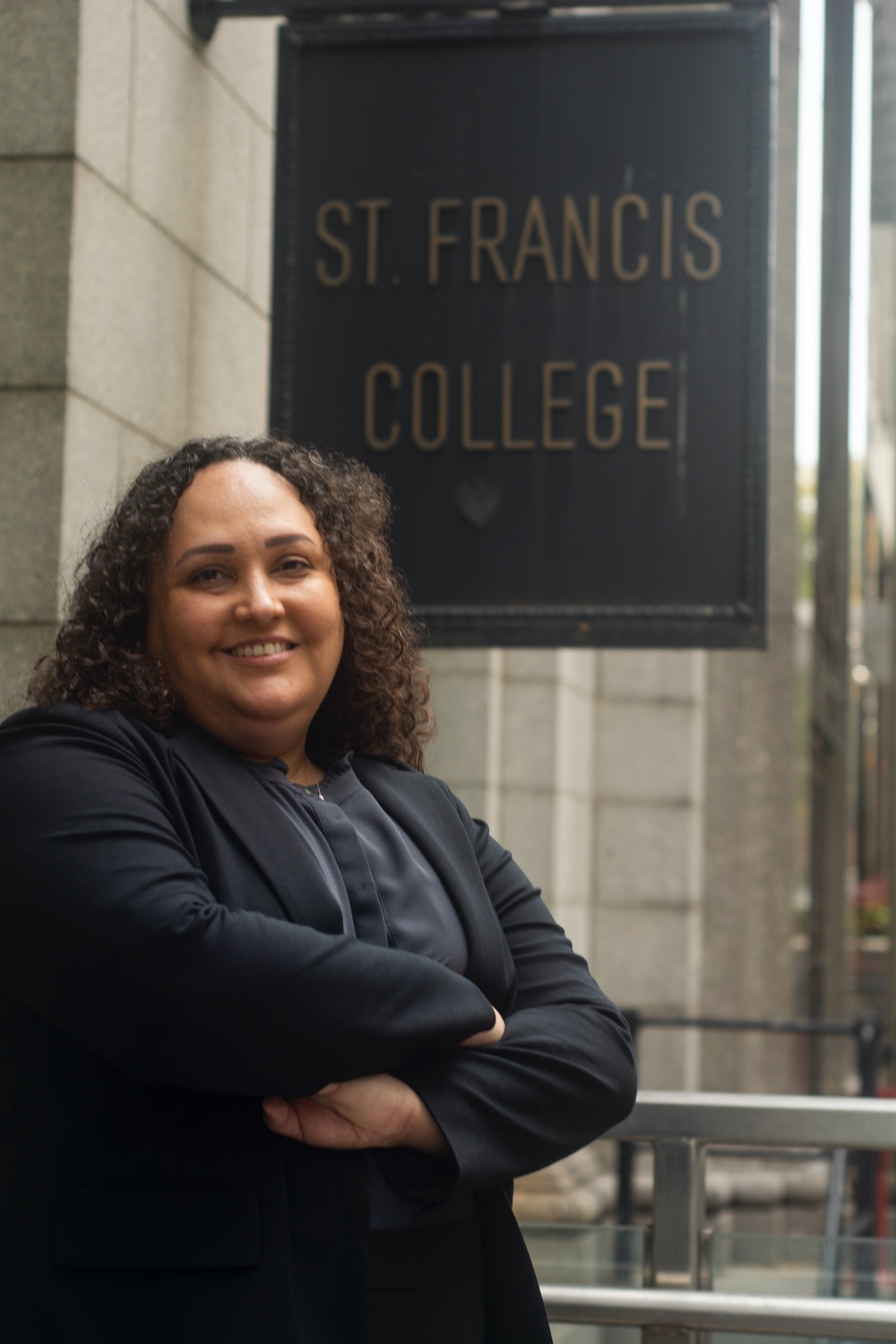 Idalizza Berrios is one of St. Francis College's many graduates who began working at a "Big Four" accounting firm immediately after earning an SFC accounting degree.

The Big Four – Deloitte, EY (Ernst & Young), KPMG and PwC (PricewaterhouseCoopers) – are the world's largest accounting firms and considered some of the most prestigious employers in the field. St. Francis College has a long, successful track record placing its accounting students in jobs there.

In Idalizza's case, her professional journey is a non-traditional path that led to her current position at PwC, where she has worked since completing her SFC education in 2015. Over five years, she has advanced there to become a manager in the audit department.

Idalizza started her higher education at a CUNY school more than 20 years ago and enrolled as a transfer student at SFC in 2012. A former small-business owner, Idalizza worked full-time while attending SFC classes in the evenings.

A graduate of Manhattan Center for Science and Math, Idalizza grew up in Spanish Harlem before eventually settling in Brooklyn Heights just blocks from the St. Francis College campus.

She recently reflected on her professional journey and the role of St. Francis College in it.

How did you choose St. Francis College?

I actually started at a CUNY school [in 1998] and then I took a break [from college]. I have a really good friend who went to St. Francis and just never stopped talking about it. I moved to Brooklyn Heights, and I met [SFC accounting professors] Dr. [Geoffrey] Horlick and John Lombardo and I thought immediately: this [St. Francis College] is where I'm going.

So that was it. I was there for three years, and it was the best three years of my life. I'm so very happy that I made that decision [to enroll].

What did you do between CUNY and SFC?

The reason I took the break is that I had an opportunity to buy a business related to the work that I was doing [at that time], specifically in medical collection and compliance. I did that [ran my own business] for about 10 years, before the 2008 recession. After that, I went back to work in an office. I started thinking about going back to school, but I did not go back until 2012.

The friend I mentioned, who talked about St. Francis all the time? She went to college after starting a family, and her son was 12 when she graduated from St. Francis with an accounting degree. She interviewed with (what was then) the Big 8 via campus recruiting and began her career with (Deloitte predecessor) Touche Ross. She's older than me, and I always consider her a second mom. I met her when I was 17 working as a file clerk in a business where she was Controller. We hit it off right away, and I always wanted to be just like her.

Accounting just fit for me. Even at 17, it just seemed like something that would work for my personality. Even when I was doing something different professionally -- in medicine -- I always planned to come back to accounting

What misconceptions do people have about accounting as a profession?

Almost every single person, when I tell them that I'm an accountant, immediately assumes that that means that I do tax work. I've started to say that I'm an auditor, which allows me to explain what I [actually] do, so that's good. But sometimes people also assume that that means I'm an IRS auditor. I encounter that all the time.

As a profession, accounting is very versatile. There are so many things you can do. You can go into private industries of any sort because accountants are needed everywhere. There's a lot of job security because of the flexibility.

How did you begin working at PwC?

I actually only interviewed with EY and PwC. Frankly, being an older student, I didn't think a Big Four would be interested in me. But I went [to the interviews] because my professors encouraged me to. I got the second interview for each. It was late in the recruiting year: December when I had my first interview and not until January when I had my second. Then I got the job offers right away.

Did you intern during your St. Francis career?

No, because I worked full-time [while enrolled full-time at St. Francis College]. I worked for a small accounting firm, doing some tax work, but mostly bookkeeping and financial statement preparation.

What's the best thing about working at PwC?

The short answer is the people. Although I'm almost twice as old as my colleagues, they're all so great. I haven't met anyone there that I didn't like. Everyone is super willing to help. It's very much a culture of supporting each other and helping each other advance our careers.

There are also so many things you can do at the firm. If you want to get out of audit for example, there are so many paths available. I really appreciate that.

Why is working at a Big Four helpful for an accountant's career?

It's no secret that working at a Big Four is a commitment in terms of time. But because of the respect that the firms have in the industry, you're much more likely to get a higher-paying job when you're coming out of a Big Four, and certainly a higher position...I've heard of people leaving a Big Four to be a CFO [Chief Financial Officer] at a smaller private firm.

What from your St. Francis College experience contributed most to your professional success?

The experiences I had with professors. John Lombardo was awesome. Dr. [Carmine] Nogara. They were such big players, and I have so much respect for them. And so much gratitude.

Dr. Horlick may have been the most important. He would give us these booklets, each just one problem to work through, which helped us develop a deeper understanding of accounting principles. Frankly not a lot of people coming to the Big Four have that experience.

How do you think your SFC education stacks up against the education some of your colleagues received from bigger schools?

Equal to any of the bigger schools, if not better. I think the advantage of a smaller school is you get a more personal experience.