Skip to main content
Upload Proof of Vaccination
Reminder: All students, faculty, and staff must be fully vaccinated against COVID-19 and upload proof as a condition of accessing College buildings (including the residence hall) during the 2021-2022 academic year.
In the Spotlight
June 30, 2020 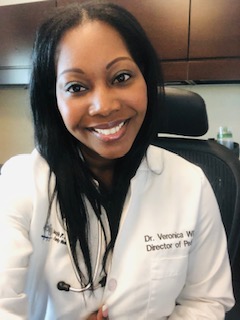 As Dr. Veronica Wiltshire '02 will tell you, her journey was anything but a straight line from Canarsie High School valedictorian to Chief Medical Officer of the Joseph P. Addabbo Family Health Center, overseeing dozens of doctors in a six-location outpatient medical center serving thousands throughout the New York City.

Dr. Wiltshire's relentless focus on becoming a physician allowed her to overcome obstacles – including roadblocks she faced as an undocumented immigrant from Guyana – that would have caused some to rethink their ambitions. She remained steadfast not only in her goals, but in her affection and gratitude towards her undergraduate alma mater, St. Francis College.

Those St. Francis ties were on full display when Thomas Flood, SFC Vice President for Advancement, reached out to Dr. Wiltshire in his role on the advisory board of Food for the Fearless (FFTF), a non-profit founded during the COVID pandemic to provide meals to frontline healthcare workers and first responders. In May, FFTF delivered 50 meals to Dr. Wiltshire's team, the "everyday heroes" serving New York City.

Dr. Wiltshire recently spoke with St. Francis College students, faculty and staff as the June 25th guest in the College's weekly Career Spotlight discussion series. Below are excerpts from that event.

How did you choose to attend St. Francis College?

My sister and I, we didn't really know of anyone who went to college. We were trying to navigate the waters [of applying for college] by ourselves. We didn't even know about studying for SATs or anything. We were just going with the flow.

I knew of [someone] who wanted to be a doctor and she went to Columbia. So I said, well, I want to be a doctor, so I have to go to Columbia too. That's the only college that I had my mind set on. I got in but being an undocumented [immigrant presented obstacles]. My guidance counselor told me St. Francis College was offering a full scholarship for valedictorians. I was my high school's valedictorian, so I visited. It was perfect. They accommodated me by allowing me to enroll as an international student.

What made St. Francis College right for you?

The classroom sizes were manageable, the professors know you by name, you were able to go and chit chat with them and build all these strong bonds. It was perfect for me.

All my friends who were in classes with me at St. Francis, they're all doing what they came there to do. They're all very successful. Every single person I know ended up leaving very happy in their lives.

What stands out about your St. Francis College years?

Every summer in August, some of us from St. Francis would be counselors at Camp Hope, a camp for HIV-positive kids. I did that for four years. One year we made FROGS – Franciscan Relief Olympic Games. In order to register, you had to pay, so that's how we raised funds. We were able to build a playroom for the kids at the camp.

The other thing was the basketball games. There was always a lot of energy. The Caribbean students were always extra. We always made a lot of noise at the games.

What was your path from St. Francis College to medical school like?

I did very well in college, but because of my undocumented status, I was unable to apply to medical school right away. I ended up volunteering at SUNY Downstate Hospital. Nothing glamorous. They had me in the basement going through charts, but that's how I got exposure [to the medical field].

I also got a job in an after school program. The principal said, "it pays $5.50, but because you have a college degree, it'll pay $5.60." I happily took the job because it was better than nothing and little did I know that it was actually preparing me for what I was going to be doing.

A fellow student from St. Francis told me about Ross University, based in Dominica, in the Caribbean. I applied and got an offer. Eventually I was able to leave [the country to enroll]. The program is 15 months, and you return and do clinicals in the U.S.

I ended up doing my pediatric residency exactly where I volunteered: SUNY Downstate.

How did you pursue your professional life after residency?

I knew I wanted to work in an under-served area. When I heard about Joseph P. Addabbo Health Center, I knew that's where I wanted to go. I've been here ever since 2011.

I'm a pediatrician. Last year I became Director of Pediatrics. Shortly after, last year in August, I became Chief Medical Officer. I'm in charge of 70 doctors across all our clinics, covering all specialties. This is by far the biggest thing I've done in my career. It's the highlight.

You took on that role about six months before the COVID pandemic really took over. How have you handled that?

As part of my job you have to put protocols in place for doctors to follow. Every day, recommendations were changing from the CDC, from the city, so every day it seemed like we were starting from scratch.

We're an outpatient clinic, so when New York went on lockdown, we still had to make sure we could see our patients. With COVID came a lot of financial issues, health issues, mental stress. We are located in Far Rockaway, Queens and it has one of the highest number of cases for COVID in the city. 800 people died here. Our doctors and nurses were seeing a lot of COVID patients. We never closed down. The patients that we serve are the essential workers. They're the ones who are working in the kitchens, in the hospitals, the bus drivers. They're not able to work from home.

One of our doctors who served this community for over 20 years actually passed away. He was one of the most loved doctors and he took care of thousands of patients in the community. Very early on, he caught COVID and ended up in the ICU and he never came out. It was so hard. We really had to work together as a team. And this is where I really saw my strength having to lead everyone. I never knew as a Chief Medical Officer, I would have to plan a memorial service.

It's still very hard mentally and emotionally, but things [with COVID] have been dying down. Hopefully we'll get a vaccine soon. I think that would really be the game changer for all of this.

What are the most important lessons you took from St. Francis College that impacted your career?

Confidence. I was very shy in medical school and residency I had to learn to be confident. It was Nelson Mandela who said that courage is not the absence of fear. It's being able to triumph over it. Even my applying for Chief Medical Officer. The person before me had been in the position for 30 years. I was totally different from what they're used to see as Chief Medical Officer. I had to have confidence that I can do that job to even apply.

Failures. You're going to have setbacks and roadblocks sometimes. But you have to embrace that and use that. Change your perspective, and attack whatever the issue is.

Timing. Not everything is going to be on your time. If it doesn't work out, don't get discouraged. Don't get frustrated. Keep a smile on your face. Keep a positive attitude. Continue to be kind, and everything will happen at the right time.