The maintenance is scheduled to take place on the following days: June 21, June 22, July 11, July 13, August 1, August 3, August 16, and August 17. If you experience any problems accessing any of these applications during these dates, please understand the application may be down for migration. SFC IT will be sending out notifications when systems are back online. Thank you for your support and patience during this process.
Academics
October 22, 2013

Sharing stories on colorblind casting and choosing a profession where the vast majority is routinely unemployed and rarely very successful, Mellini Kantayya, kept a stiff upper lip and a smile as she read from her new book, Actor. Writer. Whatever. (essays on my rise to the top of the bottom of the entertainment industry) at St. Francis College on October 22.

Kantayya has written screenplays, developed an educational children’s TV show, founded a film festival, directed plays and short films, and has even been a back-up dancer in a few hip-hop videos, but as she attests, she may never become a household name or reap the rewards of someone like Angelina Jolie.

Kantayya told the audience that staying committed to writing is a chore all its own. “I have a designated writing time and no matter what goes on I have to sit there and write. I have social network blocking software and sometimes I have to get extreme and turn on my internet blocking software. I have gone so far as to get my husband’s belt and I've literally belted myself to the chair.”

She shared with the audience a story of one of her first theatrical disappointments, when a professor at college told her after an audition that casting would not be colorblind. The play she auditioned for did not have any characters of South Asian heritage.

And while Kantayya may not become the next overnight sensation, she can point to an impressive body of work that includes appearances in the independent film Breath In (opposite Amy Ryan and Guy Pearce) and the film Colin Hearts Kay. She has appeared on the television show Nurse Jackie and had a recurring supporting role on the daytime serial One Life to Live. She has also worked Off-Broadway, Off-Off Broadway, and even as a temp, which taught her that Citicorp has better lemon merengue pie than Goldman Sachs..

“She sees her place within an industry not only as an individual but within our larger cultural landscape – specifically within the contexts of gender, age and American myths about success and failure,” said English Professor Athena Devlin who organized the talk. “It is that broader understanding of the world in which we all live and work that makes her an especially insightful and appealing voice.” 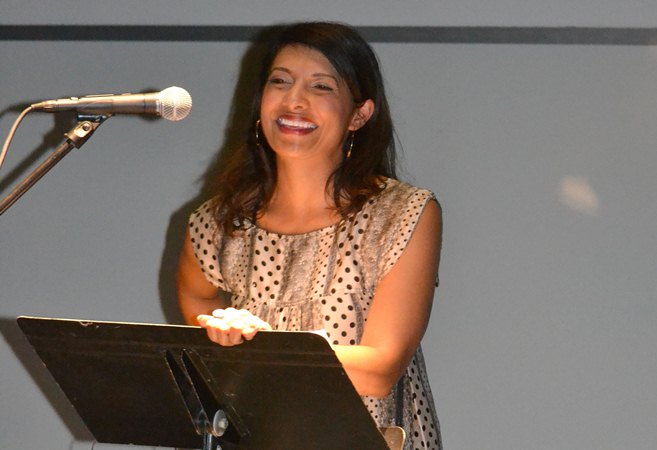 The event was sponsored by the St. Francis College Women’s Center and The American Studies Program