Skip to main content
Upload Proof of Vaccination
Reminder: All students, faculty, and staff must be fully vaccinated against COVID-19 and upload proof as a condition of accessing College buildings (including the residence hall) during the 2021-2022 academic year.
Student Life
February 2, 2017

As she walked down the aisles, shaking hands with dozens of the almost 700 people who came to see her speak, U.S. Supreme Court Justice Sonia Sotomayor talked about an important realization she'd come to since joining the highest court in the country.

"I've learned that reasonable people can disagree and I've learned to respect that my colleagues do what they do or come to the decisions they come to, not from ill will or from a desire to hurt anyone, but from their sense of passion about what they think is best for the law, for the constitution, and for our system of government," said Justice Sotomayor.

The Supreme Court Justice came to St. Francis College on February 2, 2017 as the latest speaker in the Thomas J. Volpe Lecture Series. She engaged in a conversation with a former law clerk and St. Francis alumna, Sparkle Sooknanan '02, now an associate at Washington based law firm, Jones Day; then answered questions from students.

Justice Sotomayor commented that Sparkle, a first-generation college student from Trinidad, graduated from St. Francis and went all the way up to clerking at the Supreme Court, where her peers were educated at the most exclusive colleges in the country. She said that she came to the College as a thank you to Sparkle and also because she admires the students of St. 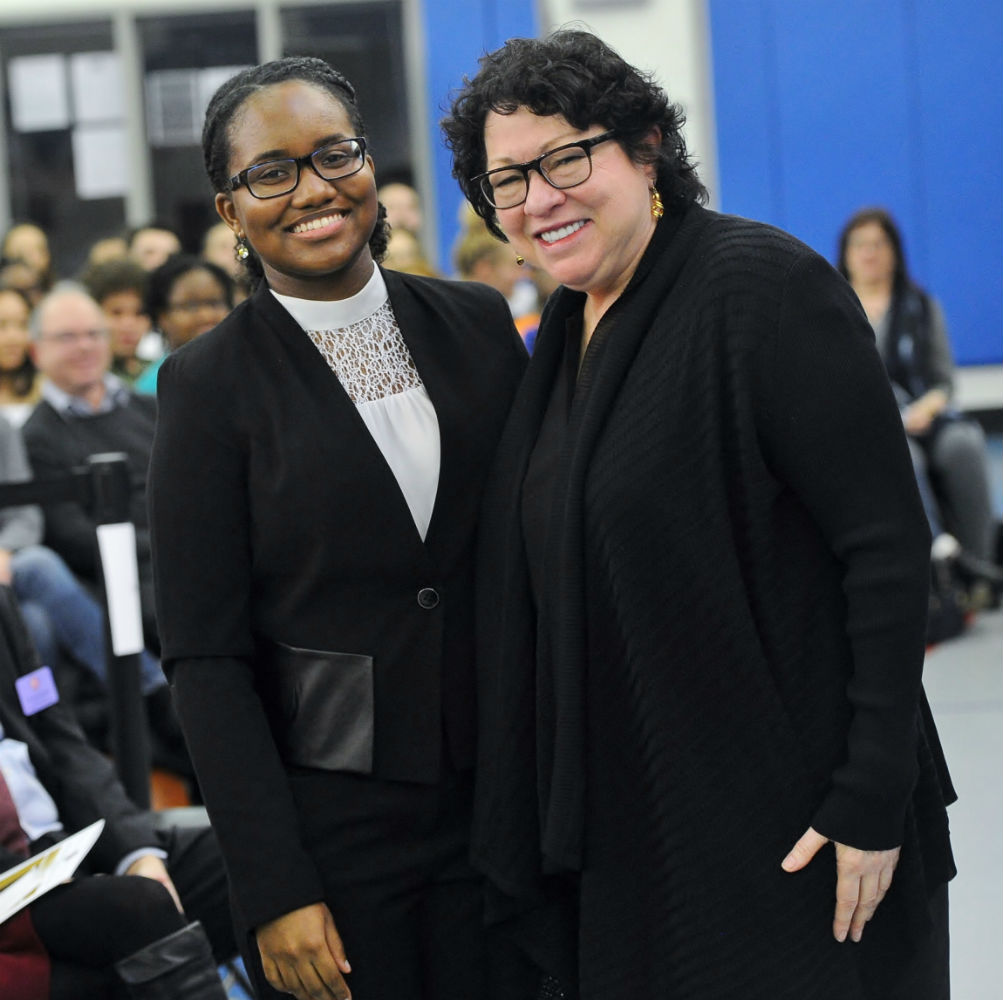 Francis College, many of them also the first in their family to go to College, because of "the things that you're doing, which is working hard to make your lives better. That's really the drive that makes you succeed; that desire, the will, and the dedication to get ahead."

When asked what the Women's March on Washington meant, the Justice talked about reasons behind the protest.

"I wish that I could say that we've reached gender equality but we're far away enough from it that I say that I can't comfort you by telling you that it won't be a struggle, still, to be a woman in the workplace," said Sotomayor.

She pointed to her own personal story and a U.S. Marshal calling her 'honey' as well as statistics that show that women still make far less money for equal work than men and lag behind in the number of power positions held at companies, organizations, and in government.

"It's unthinking discrimination in large measure, unthinking because most people in positions of power are not sensitive enough to recognize that for themselves, when they're evaluating people they're going to promote or put in positions of responsibility that are great, they tend to look for people who look like them," added the Justice.

Sotomayor also talked about the much maligned responsibility of jury duty, saying that rather than try to get out of it, we should all try to get on to a jury. 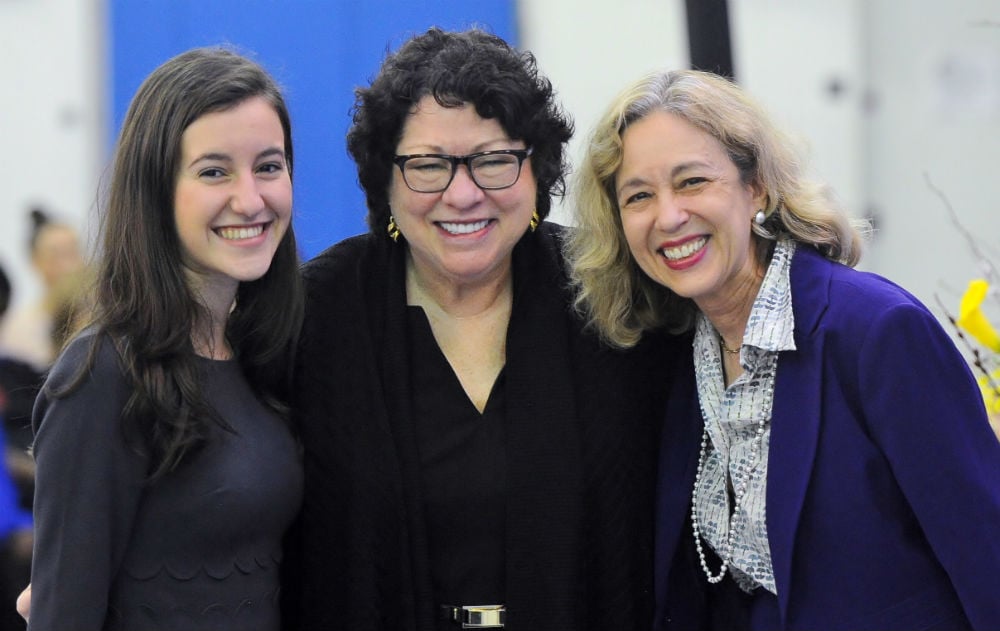 "Unless we have citizens, average, even extraordinarily skilled but average citizens, who are not lawyers, participating in the system, then we are taking away one of the fundamental guarantees of the constitution," said Justice Sotomayor. "It is we the people who should be ruling. We should be involved in civic activities. We make the laws, Washington shouldn't be. We should be making the laws. We need our voices heard."

She brought the topic back to the Women's M arch, saying that was why the march was so important, for their voices to be heard, even if they weren't listened to.

After the talk, Justice Sotomayor was presented with an Honorary Doctor of Laws by St. Francis College President Timothy J. Houlihan, Chairman of the Board of Trustees John F. Tully '67, Chairman Emeritus Thomas J. Volpe, and Vice President for Government and Community Relations Linda Werbel Dashefsky. 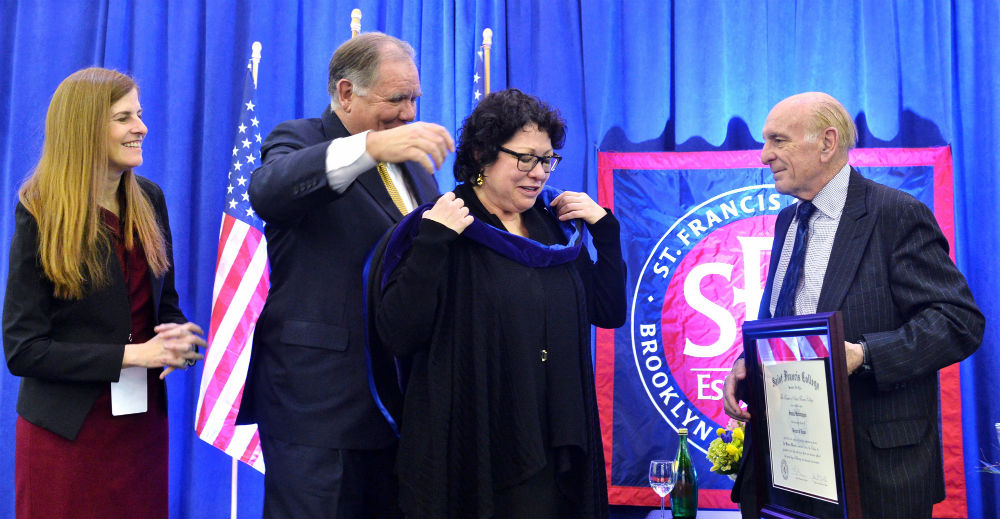 Sonia Sotomayor, Associate Justice, was born in The Bronx, New York, on June 25, 1954. She earned a B.A. in 1976 from Princeton University, graduating summa cum laude and receiving the university's highest academic honor. In 1979, she earned a J.D. from Yale Law School where she served as an editor of the Yale Law Journal. She thereafter served as Assistant District Attorney in the New York County District Attorney's Office from 1979–1984. She then litigated international commercial matters in New York City at Pavia & Harcourt, where she served as an associate and then partner from 1984–1992. In 1991, President George H.W. Bush nominated her to the U.S. District Court, Southern District of New York, and she served in that role from 1992–1998. She then served as a judge on the United States Court of Appeals for the Second Circuit from 1998–2009. President Barack Obama nominated her as an Associate Justice of the Supreme Court on May 26, 2009, and she assumed this role August 8, 2009.