Skip to main content
Upload Proof of Vaccination
Reminder: All students, faculty, and staff must be fully vaccinated against COVID-19 and upload proof as a condition of accessing College buildings (including the residence hall) during the 2021-2022 academic year.
Academics
October 28, 2010

Are the Tea Parties Good for New York?

St. Francis College and the Manhattan Institute Host a Debate on the Topic 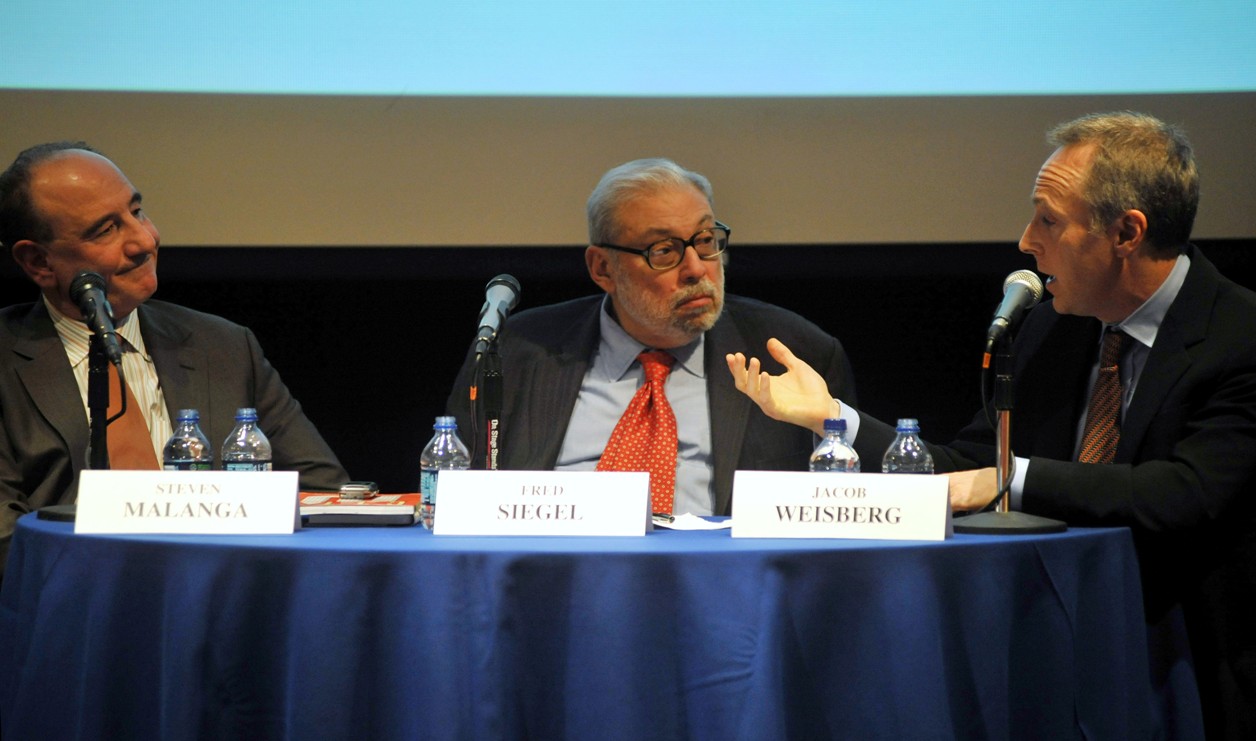 After an introduction from St. Francis College Vice President for Government and Community Relations Linda Werbel Dashefsky and opening remarks from Visiting Professor Fred Siegel the guest panelists made their opening statements.

Steve Malanga, the Senior Editor of City Journal and a Senior Fellow at the Manhattan Institute, began by talking about the opposition that any reformer in New York faces, not just the Tea Parties, saying that New York State is ruled by the “Incumbency Party” which he describes as a big-government coalition composed of elected lawmakers, public sector unions and social action groups.

Malanga says that the problems go back decades; beginning in the 50’s when Governor Nelson Rockefeller created a Medicaid program that has become the largest in the country, double the cost of California which has twice New York’s population. He added that the collective bargaining structure which came along shortly after that compounded the issue.

“Change is going to have to come from a single individual who is committed to reform at all costs,” said Malanga. “It really is not just about a movement for change but it’s about people who emerge at the right time who are committed to that change.”

Malanga then presented a long list of politicians in New York and New Jersey who came into office under the reform banner but lost their way and were unsuccessful. He said that until someone is willing to risk their political future, New Yorkers will continue to vote with their feet and simply move out of the state. He pointed to data showing that if it wasn’t for a large, sustained influx of immigrants, New York’s population would be in a steep decline. Malanga attributes the exodus to people unhappy with New York politics and policies.

Jacob Weisberg, Chairman and Editor-in-Chief of the Slate Group, a unit of the Washington Post Co. took on the Tea Parties directly saying, “not only do I think the Tea Party is not good for New York, I can’t see the Tea Party as being good for anybody or anything,” said Weisberg. “I certainly don’t think it’s good for the Republican Party; it’s likely to propel them to a kind of victory… but I think it is cutting strongly against the rational side of conservative politics and republican policies.”

Weisberg pointed out that New York Gubernatorial candidate Carl Paladino has run so far afield of the Republican party that even right-leaning newspapers who reflexively support party candidates are finding it hard to support him.

Speaking more specifically about parties, Weisberg noted that the Tea Party is not really about policies. He says it is a simplistic movement built more on anger and theater than a party pushing a comprehensive political agenda. Weisberg agreed with Malanga that fixing New York is complicated and he says while there are some common threads within the Tea Party, he hasn’t seen any coherent program that could tackle the core issues plaguing New York.

This forum is the latest in a series organized by Professor Siegel and co-hosted by St. Francis College and the Manhattan Institute including: Independent Voices On The Middle East and Journalism in the Age of the Internet.

The next event will be on Monday, November 15 at 6:00pm and feature former California Democratic Senatorial candidate and writer of Kausfiles.com, now a Newsweek.com blog, Mickey Kaus, New York State Assemblyman and former candidate for Attorney General Richard Brodsky as well as Mr. Siegel discussing the topic; After the Election: What Role Should Elites Play in American Politics?