Skip to main content
Upload Proof of Vaccination
Reminder: All students, faculty, and staff must be fully vaccinated against COVID-19 and upload proof as a condition of accessing College buildings (including the residence hall) during the 2021-2022 academic year.
Academics
March 17, 2011

On March 17, a crowd of students, faculty, and members of the community gathered in the Maroney Forum for Arts, Culture & Education at St. Francis College for a reading by author Nahid Rachlin from her book, Persian Girls: A Memoir, followed by a Question & Answer session, book signing and reception in the theater’s lobby. The intimate setting was appropriate for a reading that delved deep into the author’s personal life. (Watch the Nahid Rachlin Reading)

Among the excerpts Rachlin shared were when her father forcibly took her across Iran and back to her biological family at the age of nine. Shortly after her birth, Rachlin was given to her aunt, Maryam (her mother’s sister), after Maryam repeatedly pleaded with Rachlin’s biological mother, Mohtaram, to adopt one of her children. Maryam was a widow with no children of her own, while Mohtaram gave birth to ten children. To this day Rachlin still considers her Aunt Maryam to be her true mother. 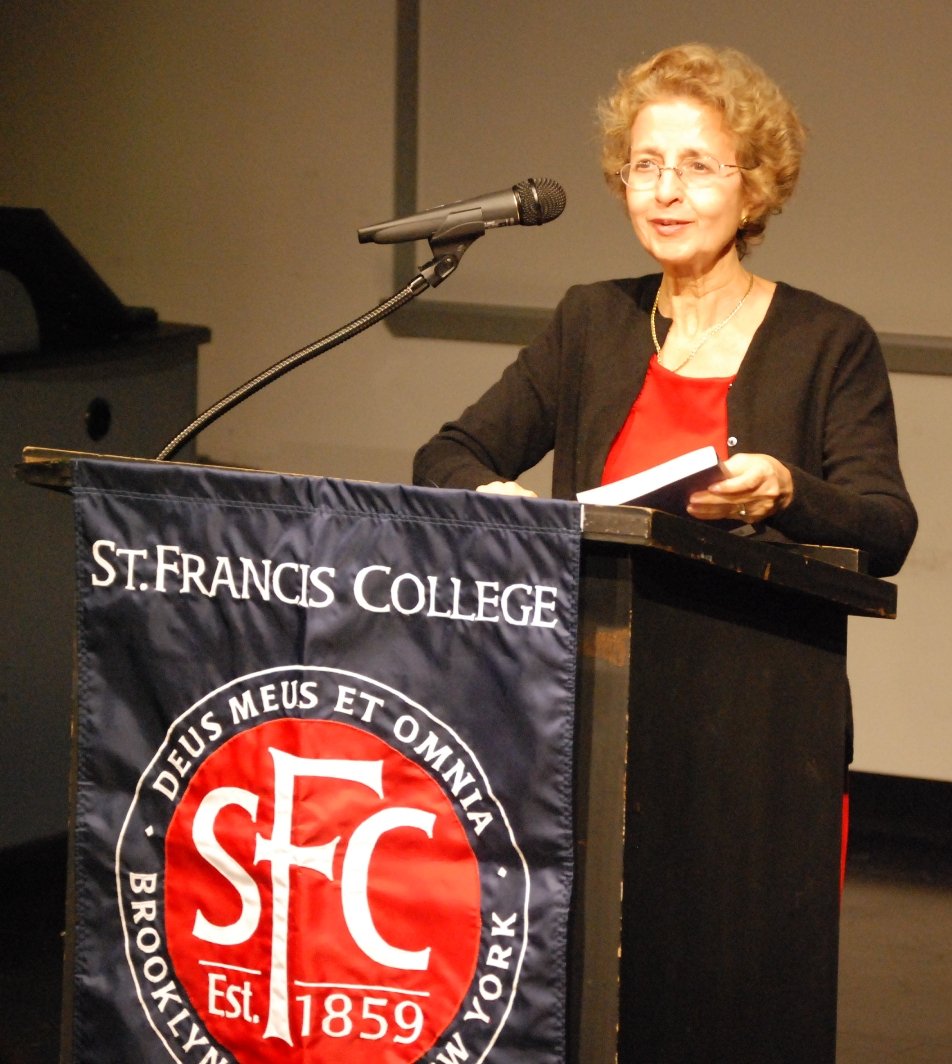 Rachlin also spoke about her upbringing in the home of her biological parents. She described her parents as being “half-Westernized” because they were not devoutly observant of Muslim customs such as praying, following the hejab, or fasting. Her father was a well educated judge in Iran, yet upheld many traditional standards of Iranian/Muslim life such as arranged marriage, believing girls and boys should not mingle together until marriage, that education was for boys, and girls should tie the knot as soon as a suitable match was found.

Rachlin told the audience about the arranged marriage of her older sister Pari, who was forbidden to marry the man she loved. The man she was forced to marry was very wealthy and educated, but Rachlin revealed he was also abusive and her sister’s marriage ended in a divorce.

Questions from the audience prodded Rachlin to give more information about how and why she came to the United States. She convinced her father to send her to the U.S. at age 17 to study on the condition that she attend an all-women’s college near her older brother. But a big reason her father agreed was that Rachlin was in the habit of reading censored books that a bookstore owner would secretly pass to her. Her father did not want any negative attention drawn to the family by the Shah’s secret police and thought it was safer for everyone if Rachlin was sent away.

At college, Rachlin told of one particular incident where she encountered extreme insensitivity and ignorance. The Dean of her college wanted her to wear her “native costume,” a chador, on Parent’s Day. Rachlin said she never wore one in Iran and “To me chador had meant a kind of bondage,” but the Dean was insistent that she had to wear one.

Shalso revealed that her book, Persian Girls: A Memoir, is not published in Iran and while many of her books have been translated into other languages and sold in the Middle East through a Lebanese publisher, none have been published in her native tongue, Farsi. Rachlin also said her decision to write in English and not in Farsi is emotional because she associates her native language with “taboo and fears” while in English she is free to write about anything.

For more information about Nahid Rachlin, including a complete biography, interviews, and upcoming readings, visit www.nahidrachlin.com.