The maintenance is scheduled to take place on the following days: June 21, June 22, July 11, July 13, August 1, August 3, August 16, and August 17. If you experience any problems accessing any of these applications during these dates, please understand the application may be down for migration. SFC IT will be sending out notifications when systems are back online. Thank you for your support and patience during this process.
Academics
February 25, 2013

With an acute awareness of the place his movies hold in the larger film industry, Director Todd Solondz (Welcome to the Doll House, Happiness) came to St. Francis College to screen and talk about his latest work, Dark Horse on February 14.

“While I always have ideas of things that I think would be very profitable, I never pursue them,” offered Solondz who was recently honored at the Deauville American Film Festival in France. “I prefer if I’m able, to make films that I want to make and hope there are others who will respond to the kind of stories and characters that I like to dramatize.”

For Solondz, Dark Horse was a simple boy-meets-girl story, but he also considers it his saddest comedy. He says his characters could be considered the flipside of someone you’d see in a Judd Apatow movie. In Solondz’s movies though, the characters are confronted with a somewhat harsher reality, but not as bad as it could be. “I’m always softening things in my movies, because life is so much harsher,” said Solondz.

When asked about the idea of happy or sad endings, he said that the most important thing to him is if there is a truthful ending. 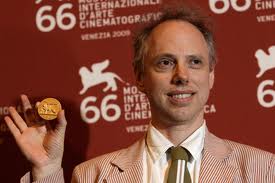 Solondz also shared a few behind the scenes anecdotes that offer a glimpse into the intricacies of making a feature film. In one scene you hear what appears to be an episode of Seinfeld, but in actuality, Solondz hired the actors to read a script he wrote because it was much cheaper than paying licensing fees to use an actual Seinfeld episode.

He also talked about shooting inside a Toys”R”Us store in the Dominican Republic because in the United States they wouldn’t let him use their logo or set a scene inside.

Dark Horse, starring Jordan Gelber, Selma Blair, Mia Farrow, and Christopher Walken, was an official selection at the Toronto, Venice and Deauville Film Festivals and was named one of the best films of 2012 by Time Magazine. The movie is a dark comedy about a thirty-something man who still lives at home and the misfortune that unfolds after he meets a woman he wants to marry.

The film screening and lecture was organized and moderator by Communication Arts Professor Scott Weiss and sponsored by the St. Francis College Honors Program and the American Studies minor.