The maintenance is scheduled to take place on the following days: June 21, June 22, July 11, July 13, August 1, August 3, August 16, and August 17. If you experience any problems accessing any of these applications during these dates, please understand the application may be down for migration. SFC IT will be sending out notifications when systems are back online. Thank you for your support and patience during this process.
February 11, 2013

Being Human: Call of the Wild

Reading stories of the cycle of life, human history and the ephemeral world, authors Janyce Stefan-Cole, Lisa Sita and Anne Whitehouse shared their thoughts on being human, for a special event, February 6, that featured some of the work which appears in the anthology, Being Human: Call of the Wild (Editions Bibliotekos).

The event was organized by English Professor Gregory Tague and sponsored in part by the new Evolutionary Studies Collaborative at St. Francis College.

“I wanted to create a character who was tuned into something a little more – not immune to the enduring chaos of the human spirit, which I think lives alongside our supposedly civilized selves, a little wild perhaps a little dangerous but that if you hear it can lift us out of our usual habits, perceptions and presumptions,” Janyce Stefan-Cole who read “Conversation With A Tree.”

Lisa Sita’s contribution, “Potatoes,” is, “a story about the lifecycle and our place within it.” She says her strong sense of place in her stories comes from her belief that we are all products of our environment. This is reflected in “Potatoes,” which features a home life similar to her own upbringing. 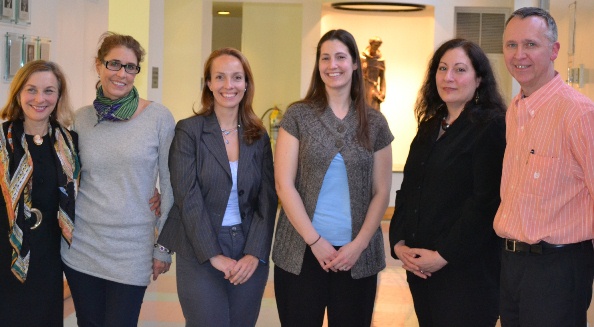 Anne Whitehouse offered to stories for the compilation, “The Sons Complaint” and “Spirals Around Two Peaks.” She introduced the two stories, which she says are linked by placing them, “in that territory between poetry and prose.” Whitehouse says that her stories explore the links between human history and natural history and meet at the crossroads of exploitation of the continent and preservation of the land.

Professors Kristy Biolsi (Psychology) and Irina Ellison (Biology) are co-founders of the Evolutionary Studies Collaborative along with Professor Tague. The event was also co-sponsored by the Department of English and the Honors Program.

About the Authors:
Janyce Stefan Cole is the author of Hollywood Boulevard (Unbridled Books). Her award winning story, “Conversation with a Tree,” is included in Being Human: Call of the Wild. A finalist for the James Jones First Novel Fellowship, she is included in the Boston Globe bestselling anthology, Dick for a Day (Villard Books), The Healing Muse, And Then among other publications. She is at work on a second novel.

Lisa Sita was selected as a finalist in the Watchung Arts Center's Italian American Arts Festival for her short story “Submarines”. She is a native of Queens, is a college administrator, educator, and freelance writer. Her publications include non-fiction books and articles for students, as well as short stories and memoir.

Anne Whitehouse is a poet and fiction writer, an Alabamian by birth and a New Yorker by choice. She is the author of the novel Fall Love and the poetry collections The Surveyor's Hand and The Refrain. Her poetry and fiction have appeared in two Editions Bibliotekos anthologies. Poems from her series, Blessings and Curses, are appearing widely in literary journals. She is at work on a second novel.