Skip to main content
Upload Proof of Vaccination
Reminder: All students, faculty, and staff must be fully vaccinated against COVID-19 and upload proof as a condition of accessing College buildings (including the residence hall) during the 2021-2022 academic year.
In the Spotlight
February 4, 2020 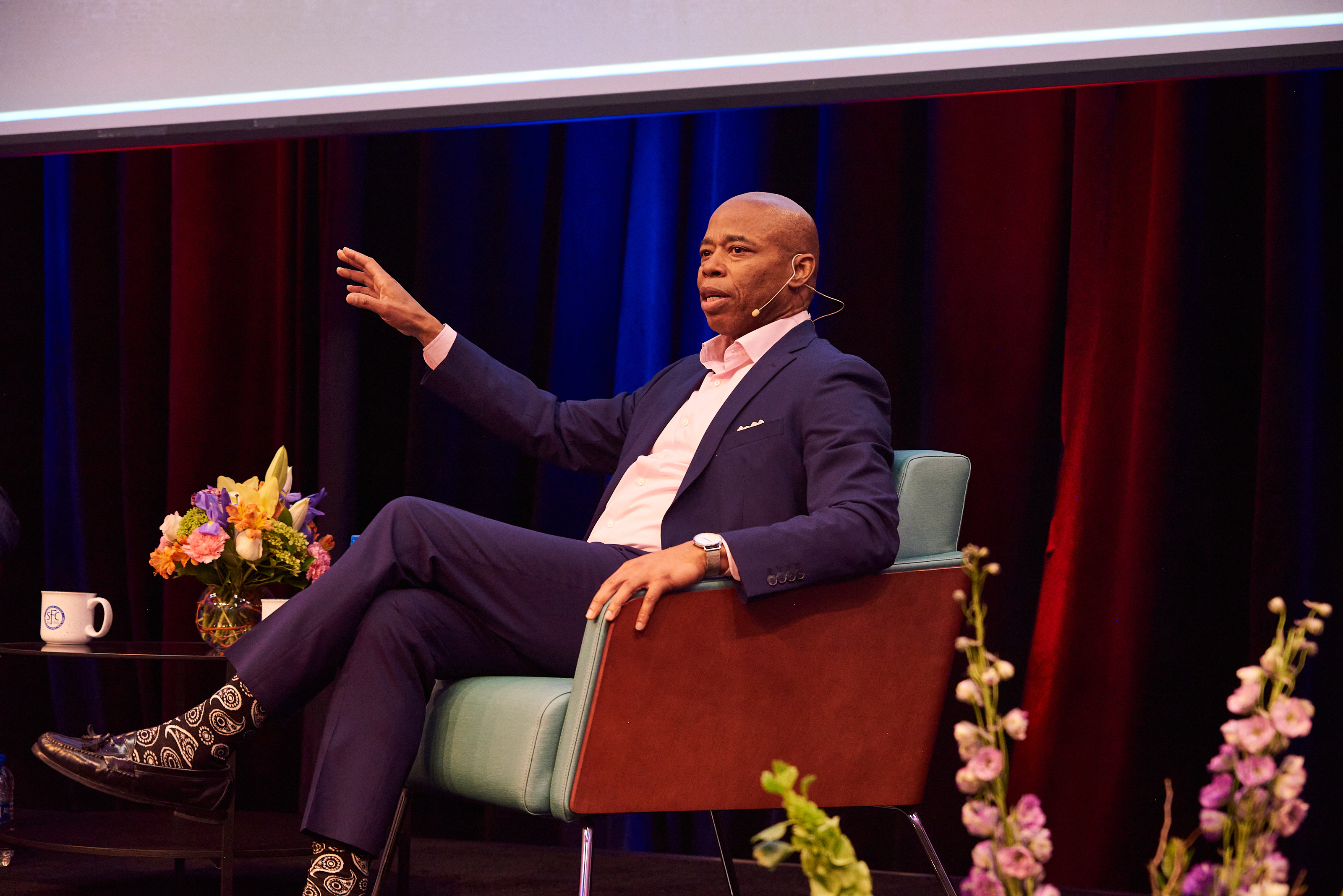 "If you don't take anything else from me today, take that. It's not about the destiny. The universe is going to take care of the destiny. It's the journey."

Encouraging an audience of more than 300 to engage constructively with people they encounter throughout their daily lives – particularly from backgrounds different than their own -- Brooklyn Borough President Eric L. Adams spoke about his youth in New York City, choosing a career in law enforcement, his efforts to promote respect among his Brooklyn constituents, and the benefits of nourishing mind and body through a healthy lifestyle.

Adams was the February 3rd guest in Reflections on a Life of Public Service, a discussion series between SFC President Miguel Martinez-Saenz, Ph.D. and leaders in politics, business and the community.

"We're moving through the borough and the city, [and] we don't even speak to each other. We don't interact with each other. We don't learn from each other. Although we're diverse, we live and exist in these silos," said Adams, when explaining the rationale for Breaking Bread, Building Bonds, his new initiative that organizes dinners for disparate groups of Brooklyn residents who may not otherwise know each other.

Adams recounted that his commitment to creating bonds of mutual respect began far earlier in his life. He joined the New York City Police Department despite having been physically brutalized by police officers as a teenager, he explained, because he came to understand that positive social change is often best accomplished from within the very structures of power that marginalize and damage the less powerful. 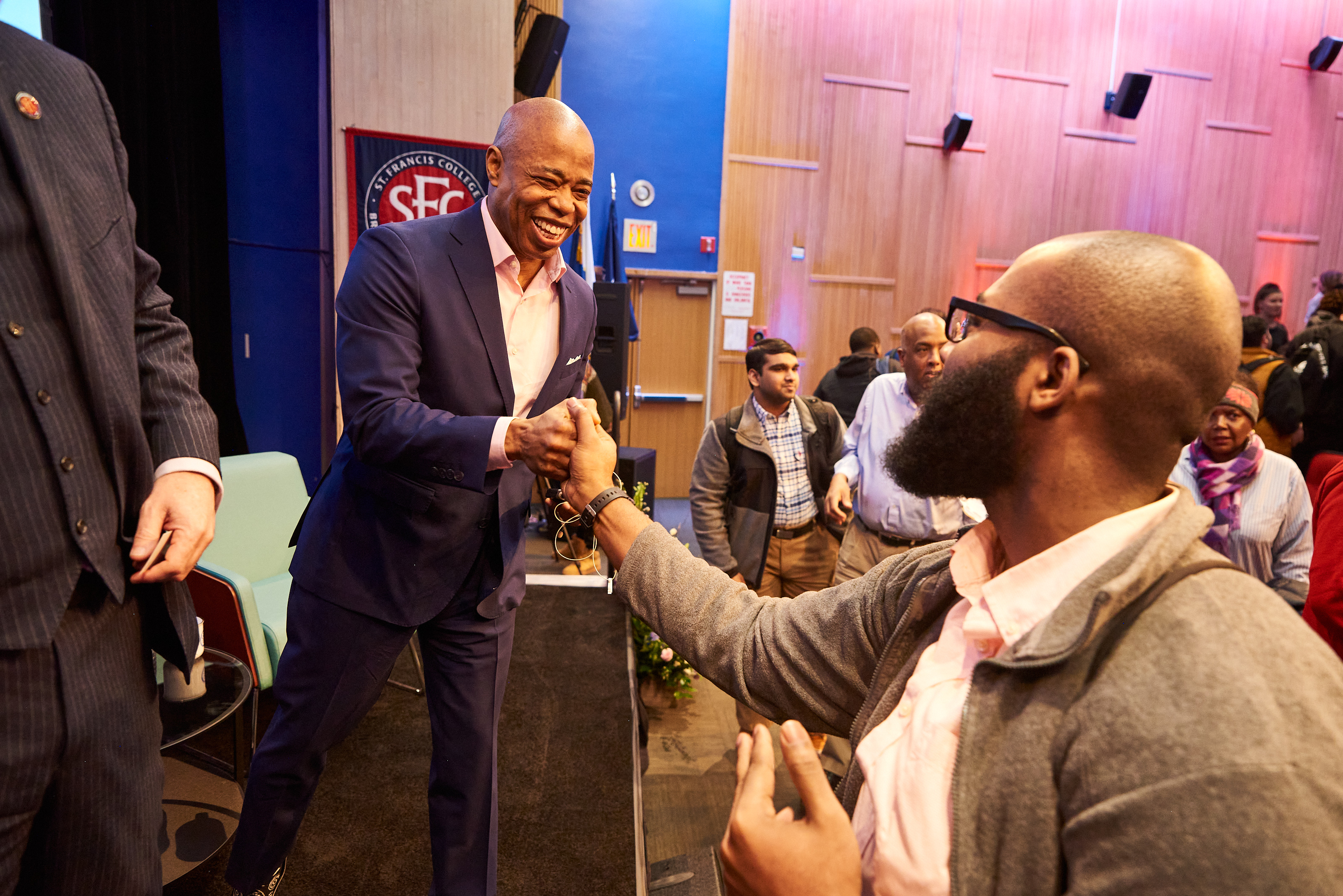 in, go inside and fight, and that is why I became a police officer," said Adams about being encouraged by a group of civil rights leaders to join the police force. Adams went on to found 100 Blacks in Law Enforcement Who Care to combat police abuse against New York City's minority residents.

Adams also encouraged the filled-to-capacity auditorium to take seriously the necessity of making choices that promote physical and mental health. He overhauled his diet after a diabetes diagnosis that initially had cost him his vision in one eye.

"Because I decided to take a nontraditional [approach] of changing what I consume -- which [meant] a whole-food plant-based diet -- in three weeks, my vision came back. In three months, my diabetes went in remission," said Adams, about his revamped lifestyle that sparked a 35-pound weight loss. "It also pushed me into meditation and pushed me into learning how the mind operates...This constant state of PTSD [destroys] who we are. Success to me is not how much money I make. It's not what car I drive. It's not what degree I have. Success is really this peaceful journey that I'm on."

Adams was the third guest in Reflections on a Life in Public Service. Prior guests were Congresswoman Nydia Velázquez (D-NY 7th District) in September 2019 and Congressman Peter King (R-NY 2nd District) in November 2019. The next guest is Marc Morial, President of the National Urban League, scheduled for March 16, 2020.