The maintenance is scheduled to take place on the following days: June 21, June 22, July 11, July 13, August 1, August 3, August 16, and August 17. If you experience any problems accessing any of these applications during these dates, please understand the application may be down for migration. SFC IT will be sending out notifications when systems are back online. Thank you for your support and patience during this process.
Academics
September 20, 2008

In their new book, Brooklyn Existentialism, Voices from the Stoop explaining how Philosophical Realism can bring about the Restoration of Character, Intelligence and Taste, two St. Francis College Professors, Arthur DiClementi (Mathematics) and Nino Langiulli (Philosophy – Retired) place the blame squarely on some of the most famous thinkers in history.

"Darwin, Freud, Marx have all had a huge impact on the way we have ordered our lives in everything from education to science to religion, law and art," said Professor DiClementi. "And it's only when we apply a sharp tongued Brooklyn perspective to their ideas that we see the folly of their ways and all the moral mischief they have caused." 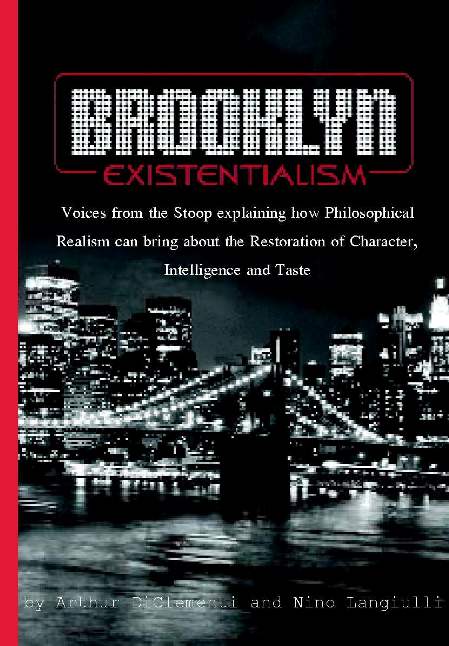 "Right now, we are being held hostage to the philosophies of Marx, Darwin and Freud that preach ideas like fate, natural selection and unconscious desires. We have all but forgotten that we control our own destinies. That freedom and reason trump some sort of pre-existing path for us," said Professor DiClementi. "What better way to get to the root of these problems and tackle them then with a heady dose of brash Brooklyn sensibility."

"We see this book following in the tradition of Socrates. We're taking knowledge back to the streets where it came from," said Professor Langiulli. Brooklyn Existentialism combats the cultural shift towards selfishness and the end of common sense and explains how to restore character, intelligence and taste.

Mike Jones, the editor of Fidelity Press which is publishing the book said, "High school seniors and college freshmen should be required to read Brooklyn Existentialism; the antidote to the bad ideas they will encounter during their college years."

DiClementi and Langiulli have enjoyed a 50 year friendship since DiClementi sat in Langiulli's classroom as a student at St. Augustine High School in Brooklyn. "I actually went to St. Francis College because Nino moved there to teach Philosophy," said DiClementi. "I may be the only high school student to ever follow his teacher to college." DiClementi became a Professor at St. Francis College in his own right in 2001, the same year that Langiulli retired. "We still talk about once a week and certainly much more during the 18 months when we were writing the book together."