The maintenance is scheduled to take place on the following days: June 21, June 22, July 11, July 13, August 1, August 3, August 16, and August 17. If you experience any problems accessing any of these applications during these dates, please understand the application may be down for migration. SFC IT will be sending out notifications when systems are back online. Thank you for your support and patience during this process.
Academics
May 31, 2011

In her third year as Information Technology professor at St. Francis College, Esther Klein has crossed the digital divide from a lifelong PC user to being on the cutting edge of Apple technology. She now teaches students to program applications for the Apple iPad, iPhone and iPod touch.

“This is a skill that is very much in demand,” said Professor Klein who earned her doctorate in Computer Science. “To my knowledge, we are the only college in Brooklyn with a course that teaches students to program apps.” 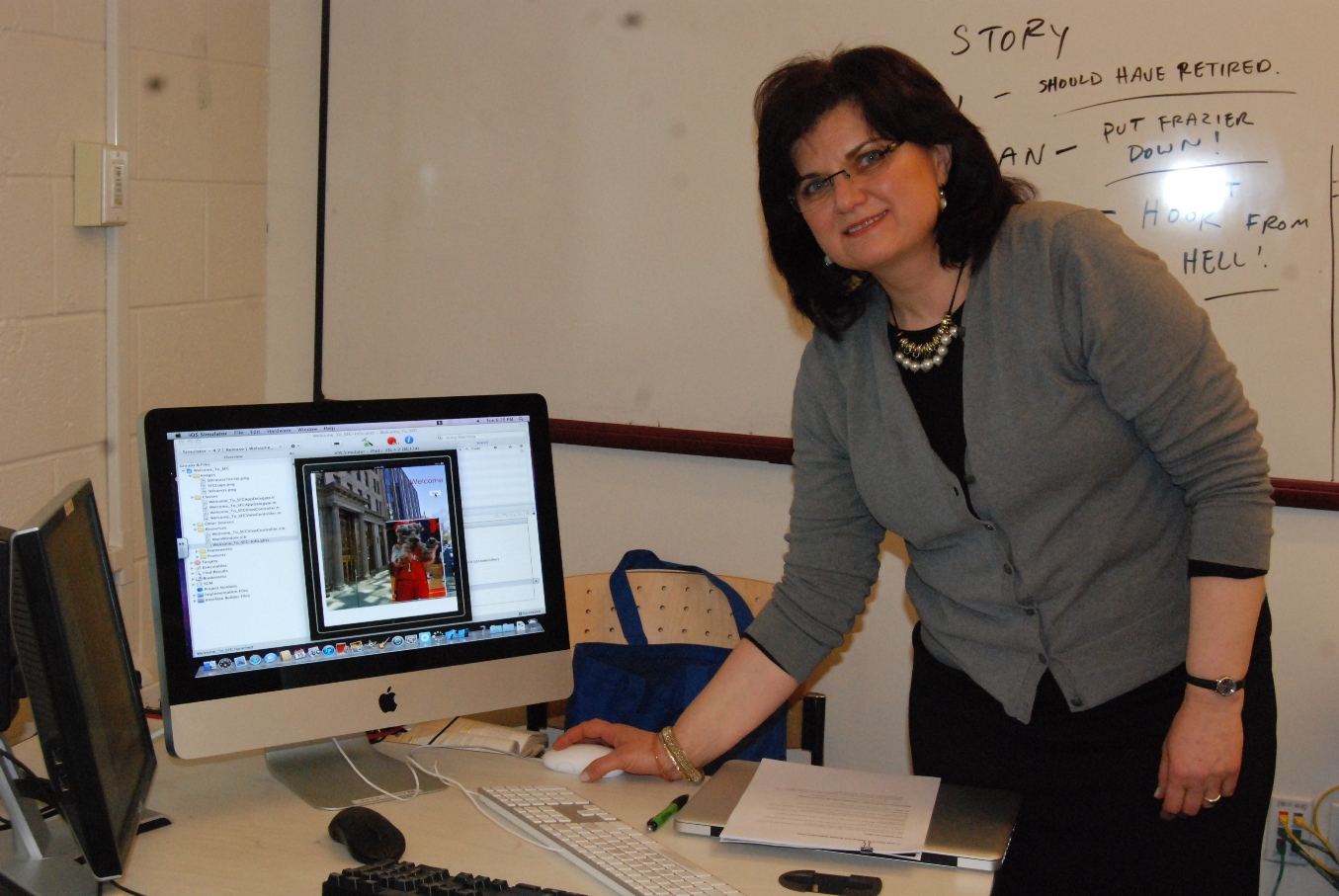 Because students come to the class with different levels of programming experience, Dr. Klein starts the course with a very basic introduction to Objective-C, the programming language Apple uses for its apps.

“I found that students with no programming background adapted very quickly, while students with a few years of various training and skills took a little longer,” said Dr. Klein. “They had to unlearn some habits and follow the specific instructions that are used in Apple’s Software Development Kit.”

“It was not always easy to follow the pace of the course, despite the previous knowledge I have in programming,” said Rajko Kisdobranski ’13 who developed a classic pong video game for his final project. “It is a pleasure to be in this class and to learn Objective-C and Xcode which are not taught in any other IT courses.”

Over the course of a semester, the students first work on an assigned project that gets them acquainted with the motion, gestures, user controls and general interface needed to build an app. They also dissect existing apps and look at theories on development and practical issues like saving user data.

From there, the students are set free to design an app of their own. They use a virtual simulator on an Apple desktop that mimics how the app will look. Ultimately, they test it on their own devices.

“It’s interesting to see that even though all three products are using the same programming software, the applications can act very differently,” said Professor Klein. “So while it would be great to program one app for the iPad, iPhone and iPod touch, it’s not a one size fits all process.”

The idea came from associate dean Allen Burdowski, who recognized that the iPad could be integrated into the curriculum.

“We started planning for the iPad well before it became such a popular tool,” said Dr. Burdowski. “Dr. Klein’s course helps students build a strong foundation of leading edge skills, giving them the potential for big rewards.”

Students have also come together to form the SFC Apple Users Group where they can work together outside of the classroom and share their programming knowledge. The first meeting featured guest speaker Ontario Britton, whose app Paper Pilot reached number three on Apple’s App Store ranking last October. (Watch his presentation)

A second level app course is now being developed, which is a step toward the IT Department’s eventual goal to build a complete Mobile Media program. There is also discussion about expanding the program to include programming for Droid phones and Microsoft based devices.

“The iPad is really a great place to start because it gives students almost immediate feedback,” said Dr. Klein, “as well as a real sense of accomplishment.”