The maintenance is scheduled to take place on the following days: June 21, June 22, July 11, July 13, August 1, August 3, August 16, and August 17. If you experience any problems accessing any of these applications during these dates, please understand the application may be down for migration. SFC IT will be sending out notifications when systems are back online. Thank you for your support and patience during this process.
Academics
March 15, 2018

Comic books and graphic novels offer a unique medium to explore the intersection between law and justice, two ideas that often sit in opposition to each other. On October 20, 2018, St. Francis College will host the Graphic Justice Research Alliance (GJRA) Annual Conference to explore this connection. (More Information on the Conference)

The keynote speaker for the conference will be Ann Nocenti, the acclaimed comic book writer, editor, journalist, and filmmaker whose work includes The Seeds, Daredevil, Catwoman, Katana and much more. Her talk will be free and open to all. There is an admission fee for the rest of the conference. 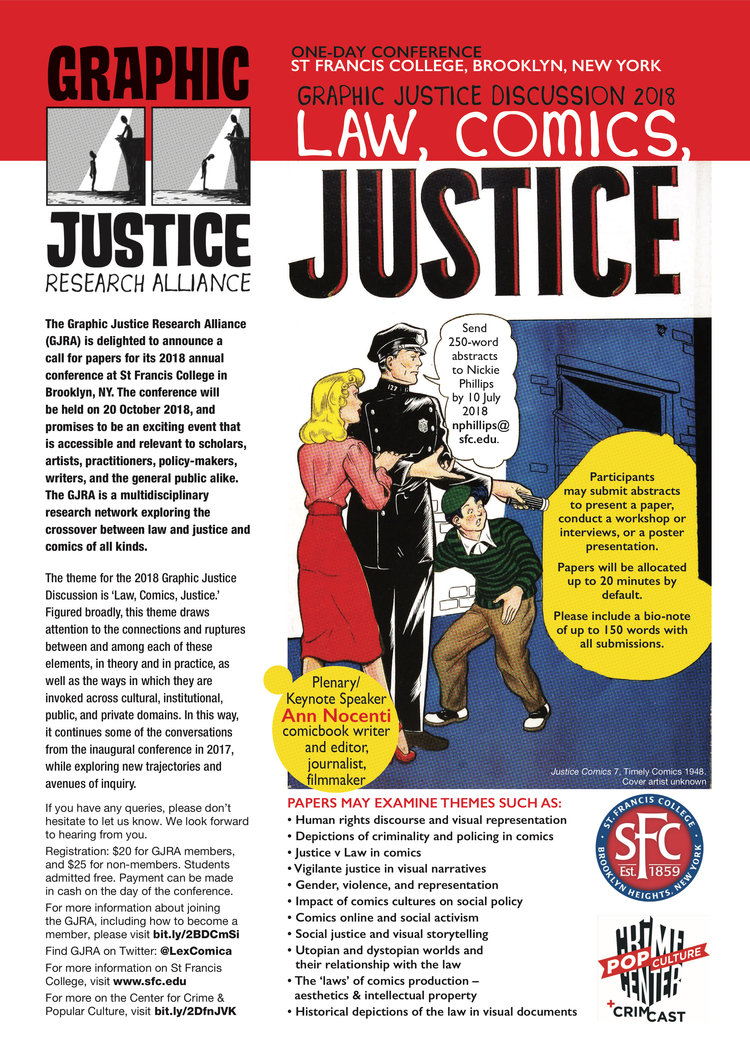 The theme for this year's Graphic Justice Discussions is 'Law, Comics, Justice', and promises to provoke a lively discussion relevant to scholars, artists, practitioners, policy-makers, writers, fans, and the general public.

The Graphic Justice Research Alliance (GJRA) is currently accepting 250-word abstracts for academic papers, workshop proposals, interviews or poster presentations. The following themes and many others which may be explored include:

The themes should draw attention to the connections and ruptures between law, comics, and justice, and look at how they are invoked across cultural, institutional, public and private domains.

Abstracts are due by July 10 and should be submitted to St. Francis College Sociology & Criminal Justice Professor Nickie Phillips at [email protected]. Applicants are asked to include a 150 word bio about themselves.

Registration for Law, Comics, Justice is $20 for GJRA members and $25 for non-members. Students are free.

The GJRA is a multidisciplinary research network exploring the crossover between law and justice and comics of all kinds.

About Ann Nocenti
Legendary comic writer and editor Ann Nocenti has lent her distinctive voice to numerous beloved comic book runs, including her writings for Marvel's Daredevil and DC's Catwoman, Katana, and Green Arrow. She will offer her observations about the industry, as well as reflections on her latest project, the forthcoming The Seeds, a new four-issue series in collaboration with artist David Aja. The series is part of a new line of Berger Books published by Dark Horse Comics and is described as "An eco-fiction tech-thriller ... a story of love beyond race and gender, and of the resilience of both human and animal kind."