Denis Salamone New Chairman of the Board of Trustees 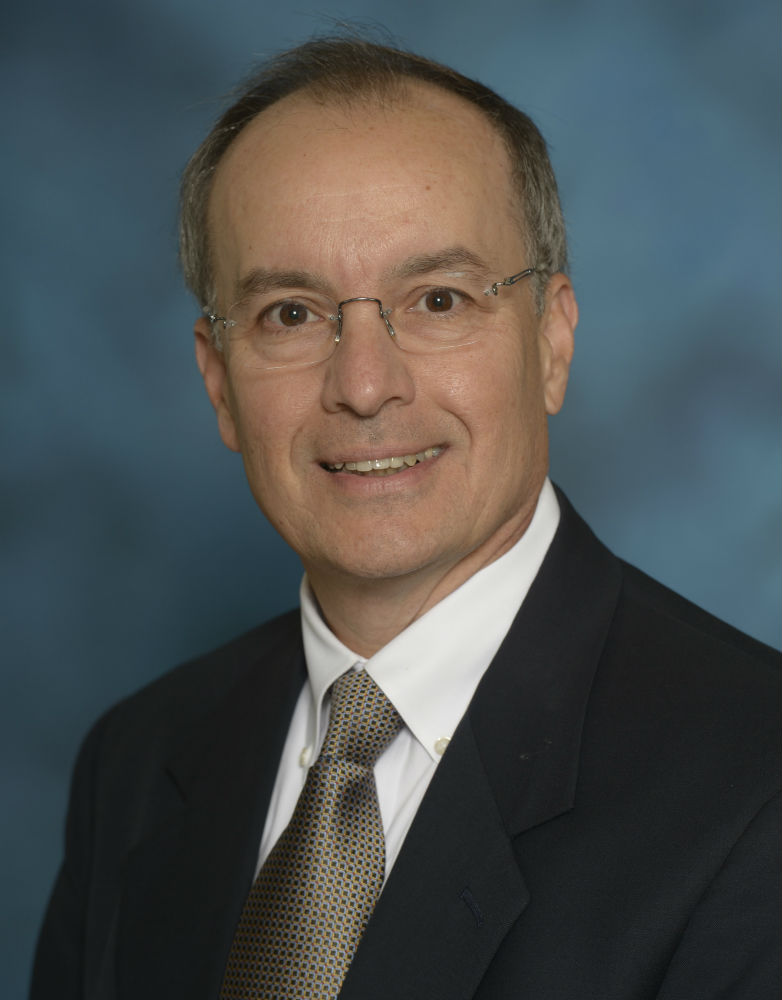 Chairman Salamone was the Chair of the Presidential Search Committee which successfully recruited current St. Francis College President Miguel Martinez-Saenz. He has been a member of the College's Board of Trustees since 2006 and has served for much of that time as Development Committee Chairman.

"Denis has helped St. Francis College in so many ways since he first graduated," said Linda Werbel, Vice President for Government and Community Relations. "His contributions already have a huge influence on the direction of the institution and under his guidance as Chairman, we expect to keep moving on a positive track."

With a career spanning more than 40 years in accounting and finance, he currently sits on the Board of Directors at M&T Bank

Corporation, having previously held the positions of Chairman and Chief Executive Officer at Hudson City Bancorp, Inc. and Partner at PricewaterhouseCoopers LLP. In addition Mr. Salamone is Chairman of the Board of the YMCA in Ridgewood, NJ, as well as a member of the Board of The Valley Hospital and Table To Table, a food rescue program serving the hungry in northern New Jersey.

"It is an honor and a privilege to lead the Board of Trustees at St. Francis College," said Chairman Salamone. "Having the respect and support of my colleagues on the Board means that we are all aligned in our vision for the future of St. Francis College. Working under the leadership of President Martinez-Saenz we will be tackling an ambitious agenda and setting new goals for enrollment, academics, and athletics. Our small College has some Big Dreams and we will be working hard to make them come true."

Chairman Salamone was honored by St. Francis College at the 2013 Charter Award Dinner helping raise more than $650,000 towards scholarships and programs at the College.

He replaces John F. Tully '67, who is stepping down after serving ten years as Chairman. John was elected to a new term as a Trustee but chose not to seek reelection as Chairman.

"Every organization benefits from a change in leadership," said Mr. Tully. "Our new president has established a firm foundation this past year, making it a perfect time for the transition. Miguel and Denis will be a formidable team." 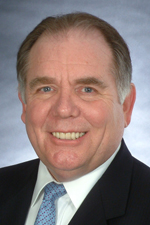 Mr. Tully was the Commencement Speaker at the College's 2015 Spring Graduation, the first one held at Brooklyn Bridge Park, where he received an honorary degree for his service and commitment to St. Francis. A Brooklyn native, he is currently Of Counsel to the international law firm of Norton Rose Fulbright U.S. LLP. Earlier in his legal career, Mr. Tully worked in a variety of government positions before joining the Exxon Corporation.

"We are thrilled to announce that as of June 2017 the New Heights Campaign raised $55 million," said Vice President for Advancement Thomas F. Flood. "We recognize and celebrate the leadership of former President Brendan J. Dugan '68, Chairman John F. Tully '67, all members of the Board of Trustees, the Campaign Cabinet, Development & Alumni Relations Offices, and everyone who contributed to this successful endeavor."

One highlight of the campaign is the creation of the Robert J. McGuire Scholarship. Thanks to the overwhelming generosity of Fred Wilpon, chairman and CEO of the New York Mets, his wife Judy, as well as other generous McGuire benefactors, the program has already provided more than $3.1 million in scholarships to 80 students from underserved communities.

The New Heights campaign had a transformative impact on St. Francis College and will continue to pay dividends as the College prepares future generations of students to become community and business leaders.

Health Care institutions make up the top five employers in New York City and New York State and now St. Francis College offers a way for anyone to take advantage of the numerous jobs in the industry with its new Master's Degree in Management.

From Clinic Administrator to Program Manager and everything in between, this flexible, part-time program provides a clear pathway to improve business leadership skills and help advance in a current job or make a mid-career switch. The program also provides valuable tools for Non-Profits, Small Businesses, and Entrepreneurs.

"Because it's part-time, our MS in Management lets you keep working while you gain new skills that you can immediately take to the office," said Marie Segares, St. Francis College Management Professor and Director of the MS Management Program. "Our goal is to move people through the courses in a fast, efficient way that gives them the best opportunity to complete their Masters and kick their career into a higher gear."

Over a two and half year period, students will take 10 courses plus a capstone where they'll work in a team to solve real problems with a real non-profit organization. All students must take both online and hybrid classes which require weekly visits to campus in Brooklyn Heights. The classes run 6 to 8 weeks each with all hybrid classes held in the evening.

The curriculum includes six foundation courses that cover organization, strategy, marketing, accounting, and Information Technology, which is unique for a management program.

Once the core classes are completed, students select a concentration in Health Care Management or Business Management.

Find out more by emailing Professor Segares at [email protected]

Another Fulbright Scholar for St. Francis

For the fourth time, the prestigious Fulbright Program recognizes St. Francis College with a scholarship, honoring Tyler McKinney '17 with a Fulbright English Teaching Assistant award to work in the Netherlands. 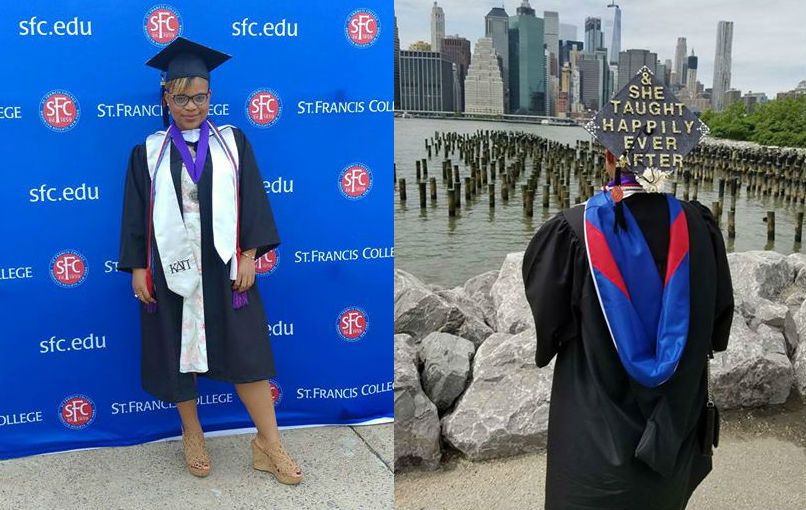 "There's a saying that goes, 'If your dreams don't scare you, then they're not big enough!' That's exactly what it was like applying for this Fulbright," said McKinney who completed a double major in Communication Arts and Adolescent Education, both with a concentration in English. "I don't always know how far I can go or how great I can truly be, but my heart is full because I am blessed with the opportunity to take my passion for education, language and travel and turn my dream into a reality."

McKinney will begin working in August at a vocational school with a focus on hospitality. She will also have the opportunity to train teachers how to implement educational theories and pedagogy in their classrooms and curriculum.

McKinney is the second student and fourth person at St. Francis to be recognized by the Fulbright Program.

Alissar Maaliki '04, a pre-med Biology Major won a U.S. Student Fulbright award to work with a research scientist in Morocco on medicinal plants.

"The Fulbright Program's mission is needed now more than ever: to promote mutual understanding between people from the United States and other countries, and thus create positive global social ripple effects," said Professor Franklin.

The fourth scholar was South African Vaneshran Arumugam, who won a Fulbright Scholar-in-Residence award to teach in the College's English Department.

Three others have Fulbright connections from before they joined St. Francis College.

Before he became the 19th President of St. Francis College, Miguel Martinez-Saenz was part of the Fulbright-Nehru International Administrators Program, selected to spend two week abroad to learn about higher education in India.

Dennis Anderson (Chair, Department of Management and Information Technology) was a Fulbright Senior Specialist and Visiting Professor in Belgium at the University of Mons-Hainaut.

Miriam Salholz (Accounting and Business Law) had two Fulbright grants; to teach U.S. law at the Universite de Paris while conducting research at Institut de Droit Comparé and an Intercountry Lecturing Award to teach in Greece for the National and Kapodistrian University of Athens, School of Law.