Skip to main content
Upload Proof of Vaccination
Reminder: All students, faculty, and staff must be fully vaccinated against COVID-19 and upload proof as a condition of accessing College buildings (including the residence hall) during the 2021-2022 academic year.
Academics
April 19, 2011

Celebrating the Power of Persuasion: $1,200 in Prize Money for Annual Delaney Speech Contest

“I think other societies use social media as a tool, but here we take our freedoms for granted, and we use things like Facebook only for personal gratification,” said Jeannette Raymond ’14, the winner of the $600 first prize at the 2011 Annual Delaney Speech Contest held on April 19. “So many of my peers don’t understand what’s going on in the world. I’m not sure the civil rights movement would succeed if it happened today, even with so much information out there.”

Raymond was one of more than 20 students who delivered a persuasive argument of less than four minutes on the topic of their choice; hers was a look at the impact and uses of social media. The $400 second prize went to Anne V. Eduard ’14 for her talk on the meaning of “Lady Like” behavior while Danielle Adone ‘13 earned $200 for her discussion of the printed word. 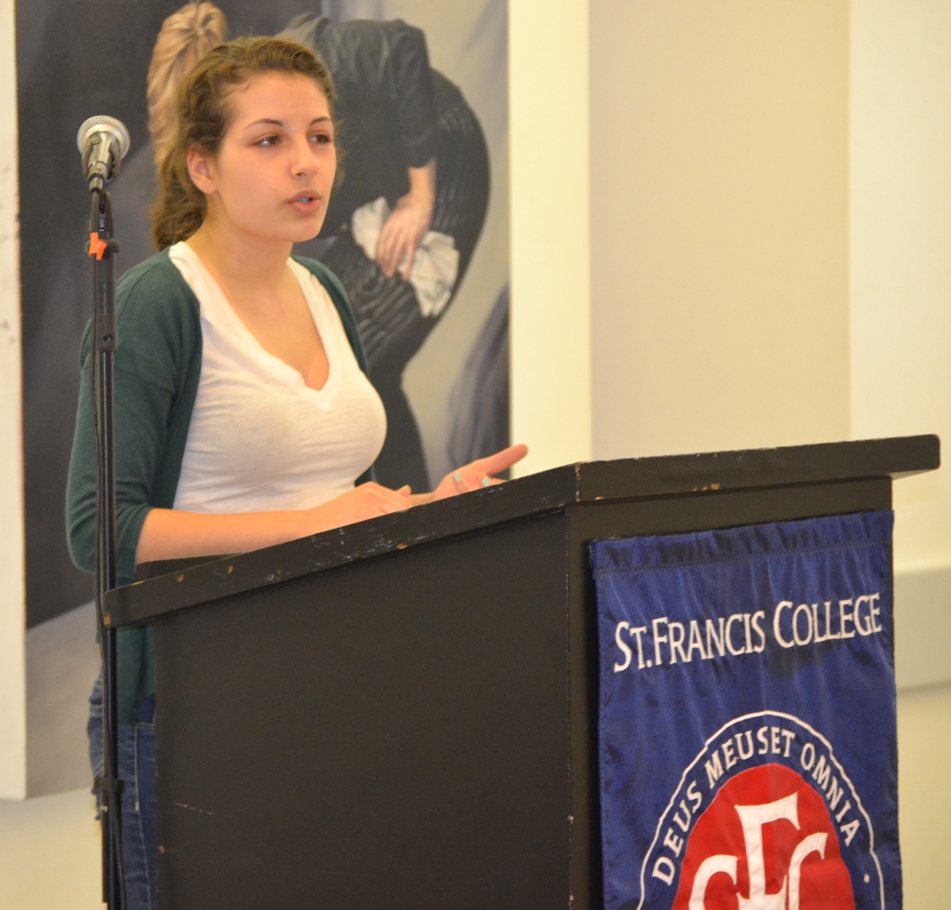 “There’s nothing inherently wrong with social media but when you’re bombarded with information it’s hard to absorb anything,” added Raymond, who does not have a Facebook account but does use Twitter to share news items from sites like Huffington Post. “So many of us live in the moment and aren’t conscious of the implication for the future.”

The contest was judged by a trio of St. Francis Communications Arts professors, including event organizer Dr. Timothy Dugan as well as Department Chair Lynne Jackson and Professors David Gewirtz.

Dr. Dugan says the annual event has become more and more popular in recent years. “No matter what you do and where you go in life, you will have to be able to present yourself in the best way possible,” said Dr. Dugan. “That’s the lesson Francis Delaney teaches us.”

The Delaney Speech Contest is named for former St. Francis Speech Professor Francis Delaney who made it his mission to “cure” St. Francis students in the 1950’s and 60’s of their Brooklyn accents to help them get ahead in their careers. Delaney donated money to the school to help keep alive the fading art of persuasive speech.