The maintenance is scheduled to take place on the following days: June 21, June 22, July 11, July 13, August 1, August 3, August 16, and August 17. If you experience any problems accessing any of these applications during these dates, please understand the application may be down for migration. SFC IT will be sending out notifications when systems are back online. Thank you for your support and patience during this process.
Academics
April 27, 2018

A surprise honor for retiring Accounting Professor Geoffrey Horlick was one of the highlights of St. Francis College's 134th Charter Day Convocation held April 27, 2018. A National Grid Scholarship and Internship was named for Dr. Horlick, who is retiring after 38 years of teaching and helping thousands of students find jobs in the accounting profession.

Among the other students recognized at the ceremony, were the new class of the Duns Scotus Honor Society, inducted by President Quynh Dang '19. In addition, recipients of the Class of 2018 Academic Awards were recognized for the first time at Charter Day. The College also honored faculty, administrators and staff who have served at St. Francis for 15 and 25 years.

The Keynote Speaker was Nicholas Allard, President and Joseph Crea Dean at Brooklyn Law School. Dean Allard implored students "to be heroes, to be teachers, and to be civil."

"This is your opportunity to step up and take on responsibility for the imperfect world in which we live, and that your children will, in turn, inherit. You can remind us of the classic qualities of the heroes we long have admired, such as selflessness, courage, modesty, respect, and adherence to core principles," said Dean Allard, pointing to movements like Black Lives Matter, #MeToo, and Time's Up as examples of how ordinary citizens have fought to take back control of their lives.

The St. Francis College Entrepreneurship Award was awarded to Saudia Davis, Founder and CEO of GreenHouse Eco-Cleaning. After the death of her grandmother from long-term exposure to toxic cleaning supplies, Davis left behind a life as a movie publicist to create a cleaning company that avoids the use of harmful chemicals.

"My one recommendations is to fail quickly. Put yourself out there... there's a lot to learn in failure," said Davis, who stressed the value that entrepreneurs bring to communities by employing local workers and helping create a sense of stability.

The National Grid Scholarship and Internship awards were presented by Carol Decina '03, Manager of Community & Customer Management at National Grid. Decina is one of the more than 100 St. Francis graduates who went on to work at National Grid and its predecessors Brooklyn Union and KeySpan. This is the 12th year these scholarships have been awarded. 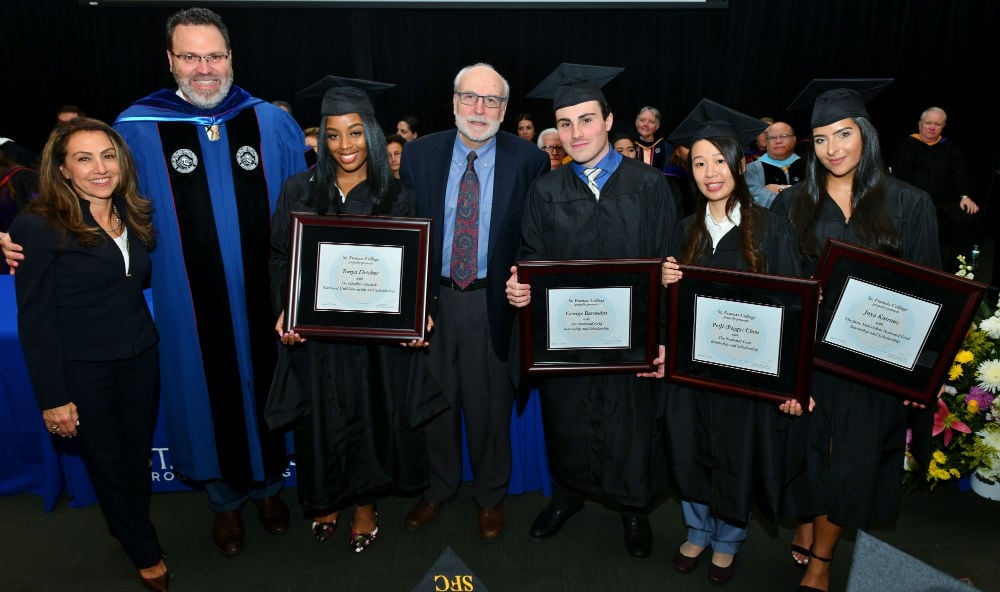 The Dr. Geoffrey Horlick award was given to Tonya Fletcher '21. An award named for former Executive Vice President June McGrisken '76 was given to Joya Kairouz '19 while two other National Grid Scholarships and Internships were awarded to George Baroudas '19 and PeiJi Chen '20.

Founded in 1935, the Duns Scotus Society is named for the Blessed Duns Scotus, a Franciscan scholar and champion of Our Lady's Immaculate Conception. Election to membership in the Society is based on scholastic standing, participation in extracurricular activities, evidence of loyalty to the ideals of St. Francis College and demonstration of a true Franciscan spirit.

Instituted by the Board of Trustees and named from one of the earliest greetings of St. Francis of Assisi, this medal recognizes and honors those members of the faculty who have completed 15 or 25 years or more of dedicated, loyal preeminent service at St. Francis College. "Peace and Goodness" is a simple yet meaningful expression of the objective of Franciscan educators.

The President's Award was instituted in 1972 to honor non-instructional personnel and the significant contribution they make to St. Francis College. The award recognizes administration and staff who have 15 years and 25 years of meritorious service.

Nicholas W. Allard is President and Joseph Crea Dean, and Professor of Law at Brooklyn Law School. Under his leadership, the Law School has experienced dynamic changes to prepare students for a rapidly changing legal field. These initiatives include the accelerated two-year J.D. program; the Center for Urban Business Entrepreneurship (CUBE), which builds on Brooklyn's emergence as a global center for high-tech entrepreneurship; and Business Boot Camp, the popular winter session program offering students intensive training in the basics of the business world. The Law School also instituted a 15 percent tuition reduction and launched the Bridge to Success program to support graduates in their job search, as part of a comprehensive package of initiatives to make legal education more affordable and more accessible.

Nick began his legal career after graduating from Oxford University (Rhodes Scholar) and Yale Law School. He was a law clerk in San Francisco and Washington, D.C., worked on Capitol Hill for the late Senators Edward Kennedy and Daniel Patrick Moynihan, and was a partner at Latham & Watkins for over a decade, where he chaired the firm's Government Relations Group before joining Patton Boggs. Nick is the recipient of multiple honors and awards for his work. He has served on numerous academic boards, taught at several law schools, and published scholarly articles on a broad range of issues, including Internet law, new media, and privacy. At Brooklyn Law School he teaches courses on Government Advocacy, Privacy Law in a Digital World, and Introduction to Legal Process.

He received his JD from Yale Law School and holds a BA from Princeton University's Woodrow Wilson School of Public and International Affairs. He is a Rhodes Scholar and holds an MA in Politics, Philosophy and Economics from Oxford University.

A longtime supporter of the St. Francis College Center for Entrepreneurship, Saudia Davis is using her business skills to do well but also to do good. Her company, GreenHouse Eco-Cleaning, works one home or office at a time to keep things clean, without using harmful chemicals.

Ms. Davis switched careers from movie publicist to Eco-Cleaning after her grandmother died from long-term exposure to toxic chemicals.

A true entrepreneur, in addition to running GreenHouse, she also contributes to HGTV Magazine, writes blogs for the Huffington Post and has been featured in numerous publications and on TV. Ms. Davis' contributions go beyond the business world, she also has sat on New York State Senator Kirsten Gillibrand's Small Business and MWBE Subcommittees, and was an active member of the White House Business Council.