Skip to main content
Upload Proof of Vaccination
Reminder: All students, faculty, and staff must be fully vaccinated against COVID-19 and upload proof as a condition of accessing College buildings (including the residence hall) during the 2021-2022 academic year.
Academics
October 7, 2014

Exploring the Tension and Finding a Balance

The decades long battle against terrorism has changed the way people think about their personal security and the freedoms they enjoy. St. Francis College Professor Yassin El-Ayouty tackled this question and the compromises we face with an expert laden panel for the event, Civil Rights Versus National Security, Exploring the Tension Between These Two National Values in a Globalized Environment of Insecurity held October 7 at St. Francis.

The Honorable Paul Gardephe, United States District Judge of the Southern District of New York moderated the discussion which featured:

The event was co-sponsored by the Department of International Cultural Studies and was dedicated to the memory of Dr. Frank Macchiarola ’62, former Chancellor and President of St. Francis College. 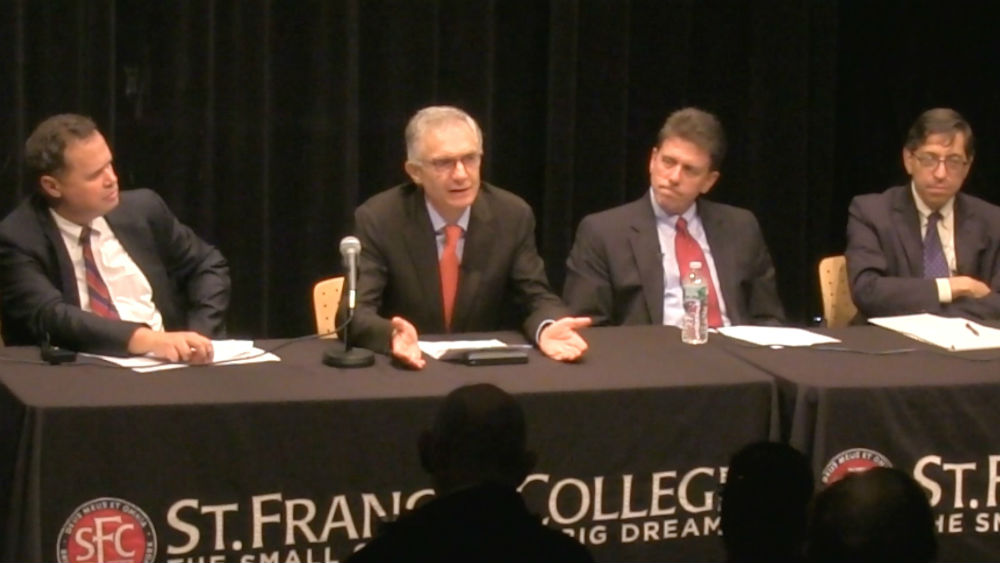 About the panelists:
Richard Barrett is former Head of Counter-Terrorism with British Intelligence MI-6. He is an expert on terrorism who also served for almost 10 years as coordinator for the Al-Qaeda and Taliban Monitoring Team at the United Nations.

Scott Horton is a human rights advocate who covers legal and national security issues for Harper's magazine. He has regularly appeared before Congress to testifying on topics like the accountability of military contractors and public integrity at the Justice Department.

Jeff Dannenberg has written for numerous legal publications and is the author of "Reconciling the War on Terrorism With the U.S. Constitution" from the book, Perspectives on 9/11 (Greenwood Publishing Group 2004).

Bruce A. Green is the Louis Stein Professor at Fordham Law School, where he directs the Louis Stein Center for Law and Ethics. He teaches and writes primarily in the areas of legal ethics and criminal law.

Richard Zabel is Deputy Chief of the U.S. Attorney's Office for the Southern District of New York and former Chief of the Criminal Division. He is a Professor of Law at Columbia University and an expert in prosecuting terrorism cases.

Dr. Yassin El-Ayouty is a retired United Nations Principal Officer and founder and president of SUNSGLOW-Global Training in the Rule of Law whose mission is to provide judicial and legal training. Dr. El-Ayouty specializes in legal and judicial reform, international humanitarian law, terrorism and the law and Islamic jurisprudence. He has worked for the United Nations as spokesperson for the U.N. during the Algerian War of independence, Secretary of the U.N. Council for Namibia and an investigating into the legal and tribal ramifications of the conflict in Darfur. Most recently he helped represent and secure the release of Associated Press photojournalist Bilal Hussein Zeydan who was detained by the US military in Iraq for two years.