The maintenance is scheduled to take place on the following days: June 21, June 22, July 11, July 13, August 1, August 3, August 16, and August 17. If you experience any problems accessing any of these applications during these dates, please understand the application may be down for migration. SFC IT will be sending out notifications when systems are back online. Thank you for your support and patience during this process.
Academics
June 17, 2013

With her pet Chihuahuas, Piper and Penelope on her lap, Denise Porcaro ’00 pieced together the elements of her life that brought her to the Lower East Side and the new home of Flower Girl NYC, her floral design shop. 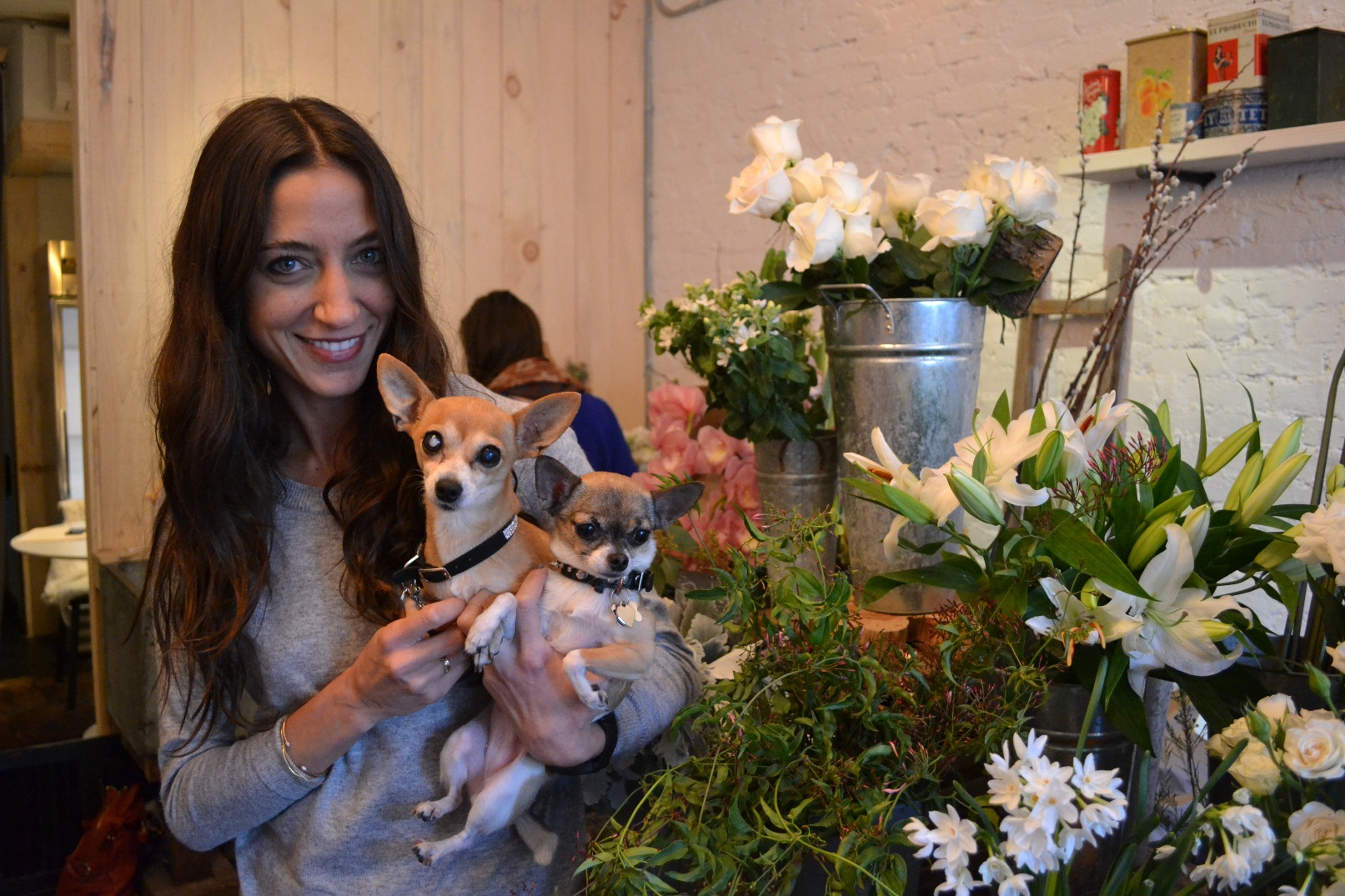 “I didn’t know what path I was going to follow specifically in college at first, and even toyed with the idea of leaving St. Francis for a bigger college. I, however, realized pretty quickly the extra attention that was available in staying in a small program and learning from people like [Communication Arts Chair] Lynne Jackson,” said Porcaro.

She says continuing on at St. Francis helped her find the rhythm of NYC. After graduating, Porcaro worked at a restaurant where she was given her first opportunity to create a floral design. She continued to design flowers but was also a freelance production designer for several years on various projects including commercials, short films, and a feature film. She also did prop styling for magazine publications.

“St. Francis led me but I didn’t realize it as it was happening,” said Porcaro, a Communication Arts major with a concentration in Film. “My major allowed for an open ended future. I had the potential to take it anywhere.”

That future came into focus when Porcaro decided to set up Flower Girl. “It was a defining thing for me to say I’m not going to continue to pursue what I went to school for.”

Porcaro began by figuring out the business aspects as she went along. She built a client data base, then moved into a shared retail shop, and gained more clients. Many of her days started with solo, early morning trips to the flower market until she eventually won enough clients to bring an assistant along with her. At the same time, her accountant taught her how to manage her financials and use the necessary software to run a successful business. Now, Porcaro has a small team working for her made up of designers, photographers and even someone to manage social media.

After five years of shared retail space, it was time for Porcaro to find, “my own four walls.” And while her shop may be small, her portfolio is quite thick with satisfied customers. Flower Girl designs for any occasion or special event; from restaurants and hotels to corporate events, from weddings and celebrations to private homes.

She owes her success to catering each of her designs specifically to what the client wants. “Say it with flowers. It’s a cliché but it’s true. You really can and should capture any mood.”

Porcaro personally does not have a favorite flower, but she does feel a nostalgic pull toward the Lily of the Valley which grew in a neighbor’s garden near where she and her grandmother lived in Queens. She also says orchids are another favorite because of their vast varieties and outrageous colors.

But flowers are just the beginning for Porcaro as she expands Flower Girl NYC to include products — tote bags, soaps and a new exclusive candle.

Her next project is to find an effective way to use flowers to give back to the community. “I’m thinking about working with a charity. Maybe we do a wedding for a returning veteran, or possibly something about sustainable living, giving and growing.”

Porcaro is working on this new project for the same, simple reason she chose to start Flower Girl NYC. “Flowers make people happy.”

You can connect with Denise Porcaro at flowergirlnyc.com.

Denise’s story is just one of the many spotlights in the new issue of the Terrier, the St. Francis College alumni magazine. You can read the issue online now at sfc.edu/terrier or just clck the image below.