The maintenance is scheduled to take place on the following days: June 21, June 22, July 11, July 13, August 1, August 3, August 16, and August 17. If you experience any problems accessing any of these applications during these dates, please understand the application may be down for migration. SFC IT will be sending out notifications when systems are back online. Thank you for your support and patience during this process.
Academics
November 9, 2012

Do Women Have to Be Naked to Get Into Museums?

GUERRILLA GIRLS TAKE ON SEXISM AND RACISM IN POP CULTURE

Wearing a gorilla head mask and entering from the back door of the Maroney Forum for Arts, Culture & Education, Guerrilla Girl, “Frida Kahlo” (a pseudonym borrowed from the celebrated female artist), offered the audience bananas as she made her way down to the stage. (Watch the Guerrilla Girls lecture)

The humorous beginning to the talk at St. Francis College on October 25 quickly moved to a serious discussion of discrimination toward women. Kahlo spoke about how the Guerrilla Girls use street theater and multimedia to shine a light on, and protest against sexism, racism, and corruption in politics, the arts and films. 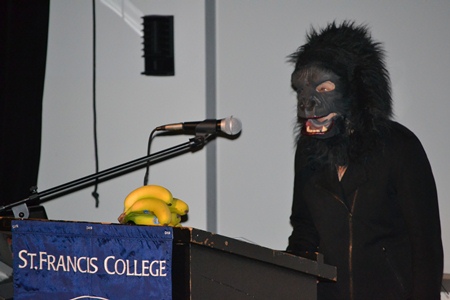 Kahlo highlighted one of the Guerrilla Girls’ most successful campaigns, in which they brandished a billboard that asked, “Do women have to be naked to get into the Met Museum?” The placard featured a graphic indicating that while only five percent of the artists on display in the museum were women, 85 percent of the time, the naked subjects of that art were female.

Kahlo said the idea served to illustrate how hard it is for women artists to gain recognition and have their art exhibited in museums. She then pointed to other such recent protest projects, including the Girls’ “Anatomically Correct Oscar” billboard, which revealed the disproportionately low number of women in film earning awards. “Same-Sex Marriage,” a Minnesota billboard, used Congresswoman Michele Bachmann’s own words on equality to underscore what the Girls consider her hypocrisy on the issue of gay marriage.

“The Guerrilla Girls began their fight over twenty years ago to bring attention to the discrimination against women and artists of color,” said Criminal Justice Professor Nickie D. Phillips, who organized the event. “What’s sobering to me is that the landscape hasn’t changed nearly as much as we’d like to think it has. Women still have similar struggles, although there is more awareness. I’m thankful for the work they do through their activism and education and feel privileged to have their message relayed here at St. Francis.”

Kahlo underscored the ironic change in the way the Guerrilla Girls have been received from when they first began protesting the lack of women’s art in museums: Their work is now on display in some of the very same museums they protested.

Even with this recent breakthrough, Kahlo says the group continues to press the fight for equality and address negative stereotypes that impact girls and women.

Professor Phillips is also the Director of the Center for Crime & Popular Culture, which sponsored the event along with the St. Francis Women’s Center.