Skip to main content
Upload Proof of Vaccination
Reminder: All students, faculty, and staff must be fully vaccinated against COVID-19 and upload proof as a condition of accessing College buildings (including the residence hall) during the 2021-2022 academic year.
Academics
January 25, 2019

St. Francis College is proud to present a new group exhibition that explores the connection between empathy and action around climate change. Environmental Empathies will be on display from February 6th to March 28th in the Callahan Center Art Gallery. The exhibiting artists, working in all media, help viewers "put themselves in the shoes" of future (or current) generations who will experience the effects of climate change or of the plant and wildlife being impacted.

Please join us for this workshop with bio-artist Moira Williams. We will engage in a group meditation on the intersections between human and non-human lymphatic systems and biomes, explore harmful harmful plastics and other endocrine disruptors found in our waterways that affect all bodies, and explore the potential of fermented foods to mediate the negative health effects of endocrine disruptors.

We will sample homemade fermented kombucha beverages and sourdough bread and learn to make our own, and use microscopes to study the microbial cultures (scoby) living symbiotically in these fermented foods. Ultimately, we will consider matters of care for all bodies and view all bodies as co-creators.

Fermented Freedoms: A Multiplicity of Cultures workshop is part of the exhibition Environmental Empathies, curated by Katherine Gressel and currently on view through March 28 in the Callahan Center at Saint Francis College, 180 Remsen Street, Brooklyn, NY. The workshop will include a brief curator overview of the exhibition. 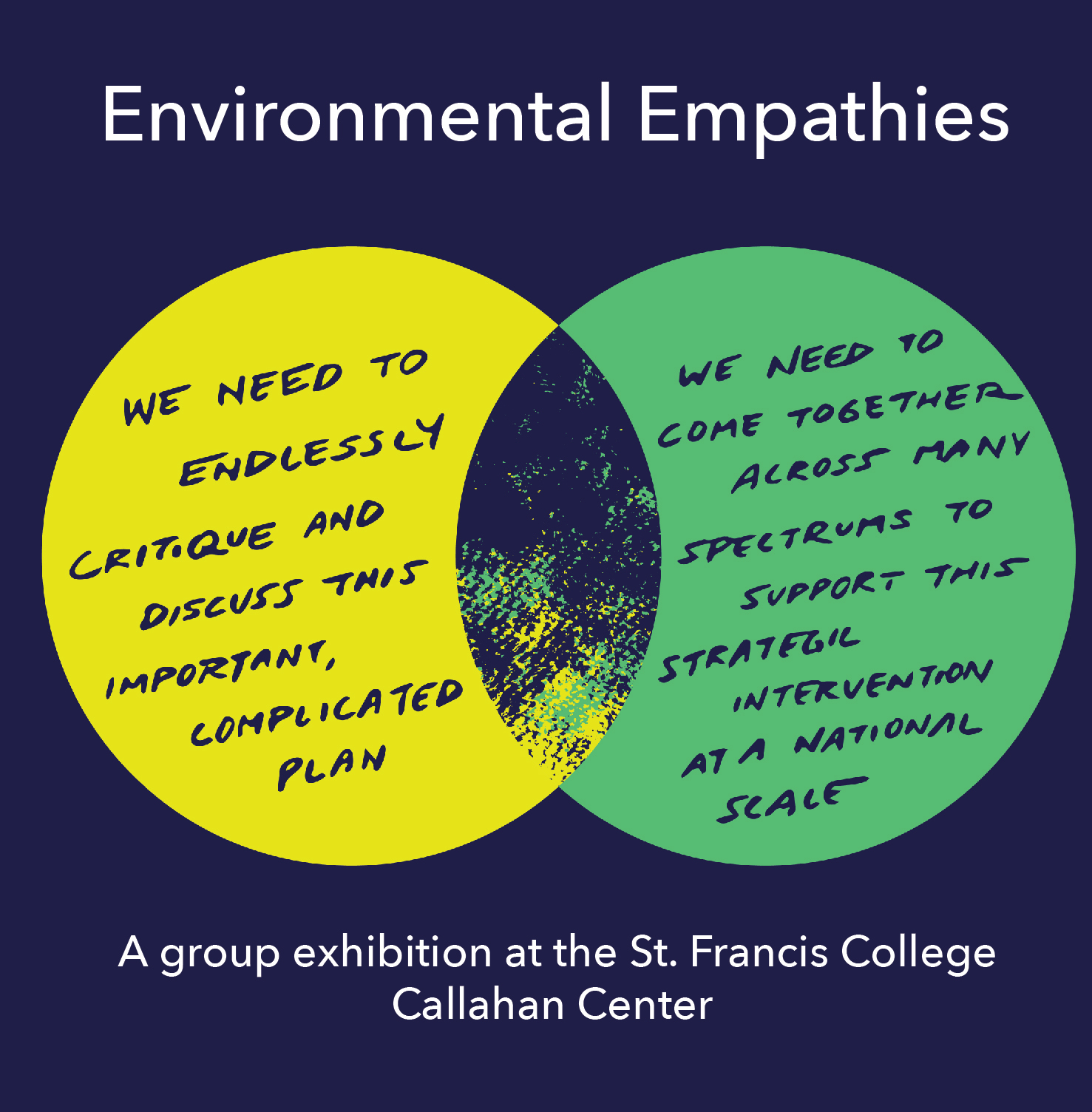 Select artists offer concrete ways to engage with one's local environment and overcome feelings of apathy, complacency and hopelessness in the face of a crisis that can feel both too inevitable and too distant to face. Others promote dialogue around divisive issues.

"I think that one of our biggest environmental challenges is believing we can ignore the problem because it won't affect us in the short term (or in our part of the world), or because there's nothing we as individuals can do to stop this huge and impending crisis," said Katherine Gressel, exhibit curator and a New York‐based curator, artist, and writer.

Gressel's previous exhibits have been recognized by the New York Times, Time Out New York, Hyperallergic, News 12 Brooklyn, and DNAInfo. In addition to developing a new contemporary art program for Brooklyn's Old Stone House & Washington Park over the past 10 years, Katherine has curated for FIGMENT, No Longer Empty, and Brooklyn Historical Society, and was the 2016 NARS Foundation emerging curator.

"The artists in Environmental Empathies help demonstrate how all of us have an impact on the environment (whether positive or negative), though certain populations/species are already feeling the negative impacts more acutely than others and art can be especially effective in telling their stories," added Gressel.

Environmental Empathies is inspired by the legacy of St. Francis of Assisi, known as the Patron Saint of Ecologists based on his belief in "care for creation," or love for all living things and our interdependent relationship with the Earth. The term "environmental empathy" is associated with recent research demonstrating that concern for the suffering of other humans correlates with "compassionate feelings for the suffering environment" and, as a result, pro-environmental tendencies.

"Some of the artists also provide fun and creative ways for us to connect with nature, live more sustainably, and get involved in climate activism, as an alternative to apathy or hopelessness," said Gressel.

At the February 6th opening, visitors can collage and write postcards to local politicians about environmental concerns with photographer Carolyn Monastra. Artist Rachel Schragis will work with the St. Francis community to map the contradictions in their own feelings about climate change, as part of an interactive space that will stay open and change throughout the course of the exhibition.

"I hope these workshops will provide a valuable hands-on supplement to such classes as Art for Social Change and biology/environmental science, enhancing students' understanding of the subject matter as well as the specific artworks," said Gressel. "Ideally, the workshops will inspire further actions in individual participants, but at the very least they will hopefully open people's minds to new approaches and inspire creative thinking."

The exhibit is funded by the St. Francis College Office of the President with additional support from the Departments of American Studies, Biology, Communication Arts and Fine Arts. Image credit: Rachel Schragis and Janice Gan with various contributors, "Green New Deal Vents."

Elena Soterakis' paintings connect our "throw-away society" and overconsumption to the impending ecological disaster that we are facing in the 21st Century. Eric Corriel's interactive window projection links passersby's movement on the street to melting arctic glaciers, a reminder that seemingly distant and slow-moving climate changes affect and are affected by the actions of people everywhere.

Photo and video works by Nathan Kensinger, Carolyn Monastra, and Alicia Grullon promote deep engagement with populations and places currently most impacted by environmental change, and with both grassroots and bureaucratic solutions. Grullon collaborated with teenagers and climate scientists to highlight the personal impacts of pollution in the U.S.'s poorest congressional district, in the South Bronx. Her video "frames the interconnectedness of resiliency as fundamental to survival."

Monastra's photographs of communities around the world adapting to climate change suggest the necessity of a global response, as "those who consume the least are often most affected by those who consume the most." Her recent collaboration with writer Betsy Andrews gives voice to "Elder Activists" who hope to inspire future generations.

Rachel Schragis's work visually maps seemingly contradictory truths about climate change. Her contributions include an ideological map of the 2014 People's Climate March; "vent diagrams" of debates around the Green New Deal (in collaboration with Janice Gan) and opportunities for participatory community diagramming and dialogue to seek common ground.

Projects by Mary Mattingly, Moira Williams, and the Environmental Performance Agency (EPA) provide opportunities to connect with and learn from nature. This type of immersion is critical to avoiding "'ecophobia'...or the growing feeling of hopelessness and disempowerment" when exposed to daunting environmental problems, in the words of environmental empathy researcher Diane M. McKnight. Mattingly's edible plant installation will encourage visitors to "tell the stories" of their neighborhood soil in addition to testing it for toxicity. Williams' installation on the ameliorative qualities of fermented foods will provide free recipe cards and connect environmental and human health on a micro level. The EPA's recent projects "draw from the wisdom of spontaneous urban plants" (aka weeds) to encourage acts of resistance and self-care.

A site-specific installation by Tara DePorte will reference the stories of St. Francis and others to allude to the inherent interconnectedness between humans and nature, and to "mother earth" as a sacred being caught between destruction and revitalization.

Most artwork in Environmental Empathies will be available for purchase.

Katherine Gressel is a New York‐based curator, artist, and writer focused on site‐specific art. She earned her BA in art from Yale and MA in arts administration from Columbia. She was selected for the 2015 Independent Curators International (ICI) Curatorial Intensive in New Orleans. Katherine has written and presented on public and community art issues for Createquity, Americans for the Arts, and Public Art Dialogue, among others. Katherine also served as Programs Manager at Smack Mellon Gallery from 2010-2014, and has worked and consulted for diverse nonprofits in the areas of arts education, project management, and development.

FREE & Open to the Public 7 days a week, 8am-8pm, except when campus events are taking place in the Callahan Center. Please see the College's calendar for a list of events: https://www.sfc.edu/news. Visitors should check in with the concierge and security.