The maintenance is scheduled to take place on the following days: June 21, June 22, July 11, July 13, August 1, August 3, August 16, and August 17. If you experience any problems accessing any of these applications during these dates, please understand the application may be down for migration. SFC IT will be sending out notifications when systems are back online. Thank you for your support and patience during this process.
Academics
January 4, 2015

Exploring What Makes Our Mind 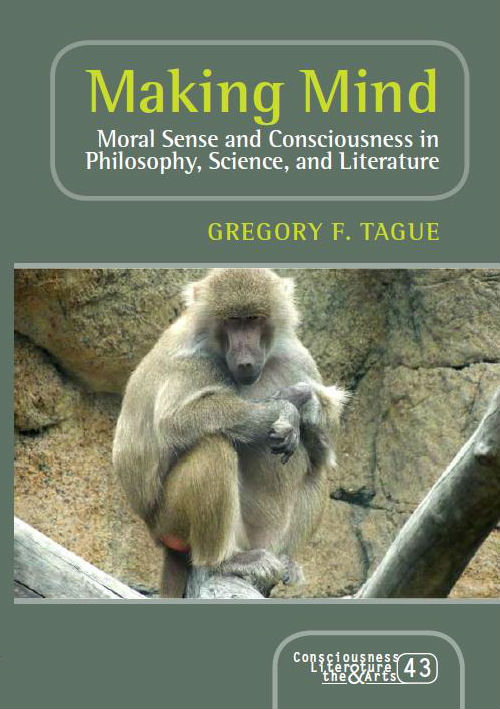 “The book is an interesting study of how our species-inherited moral sense can differ dramatically from one individual to another,” writes Dr. Tague. “While mores pertain to a group, narrative comes from and is processed by the individual and reaches its high point in the novel.”

Topics covered in the book include:

“A biologist, a philosopher and a literary historian walk into a bar. The bartender asks, ‘What makes a human?’ Making Mind is an immediately intense account of the ensuing discussion,” writes Professor David C. Lahti (Queens College, CUNY Graduate Center). “No joke—Prof. Tague plays all three of these parts, covering an enormous amount of ground with an erudite slam, a masterful attention to disparate fields, supported by a blistering onslaught of references.”

“Making Mind is a significant addition to the growing field of evolutionary literary criticism, illustrating not only the by now remarkable scope of this line of inquiry but also the fundamental applicability of evolutionary psychology to the study of literature,” adds Professor Anja Müller-Wood (Johannes Gutenberg-Universität Mainz).

Find out more about Making Mind or purchase a copy at the Rodopi website.

Professor Tague has authored and edited numerous books including: as author, Ethos And Behavior: The English Novel from Jane Austen to Henry James (Academica Press, 2008); as co-editor and contributor, Origins of English Dramatic Modernism, 1870-1914 (Academica Press 2010); and as author, Character And Consciousness (Academica Press 2005). He also edited five anthologies published by Editions Bibliotekos including Puzzles of Faith and Common Boundary. Professor Tague also publishes The Association for the Study of Ethical Behavior in Literature Journal.