The maintenance is scheduled to take place on the following days: June 21, June 22, July 11, July 13, August 1, August 3, August 16, and August 17. If you experience any problems accessing any of these applications during these dates, please understand the application may be down for migration. SFC IT will be sending out notifications when systems are back online. Thank you for your support and patience during this process.
Academics
October 3, 2010

Five Franciscan Brothers, all graduates of St. Francis College, celebrated their Jubilees Sunday, October 3 at The Immaculate Conception Center in Douglaston. Superior General of the Franciscan Brothers of Brooklyn Brother William Boslet, O.S.F. '70, another graduate, attended the Mass, which was celebrated by Most Reverend John C. Dunne, DD, Auxiliary Bishop of Rockville Centre. 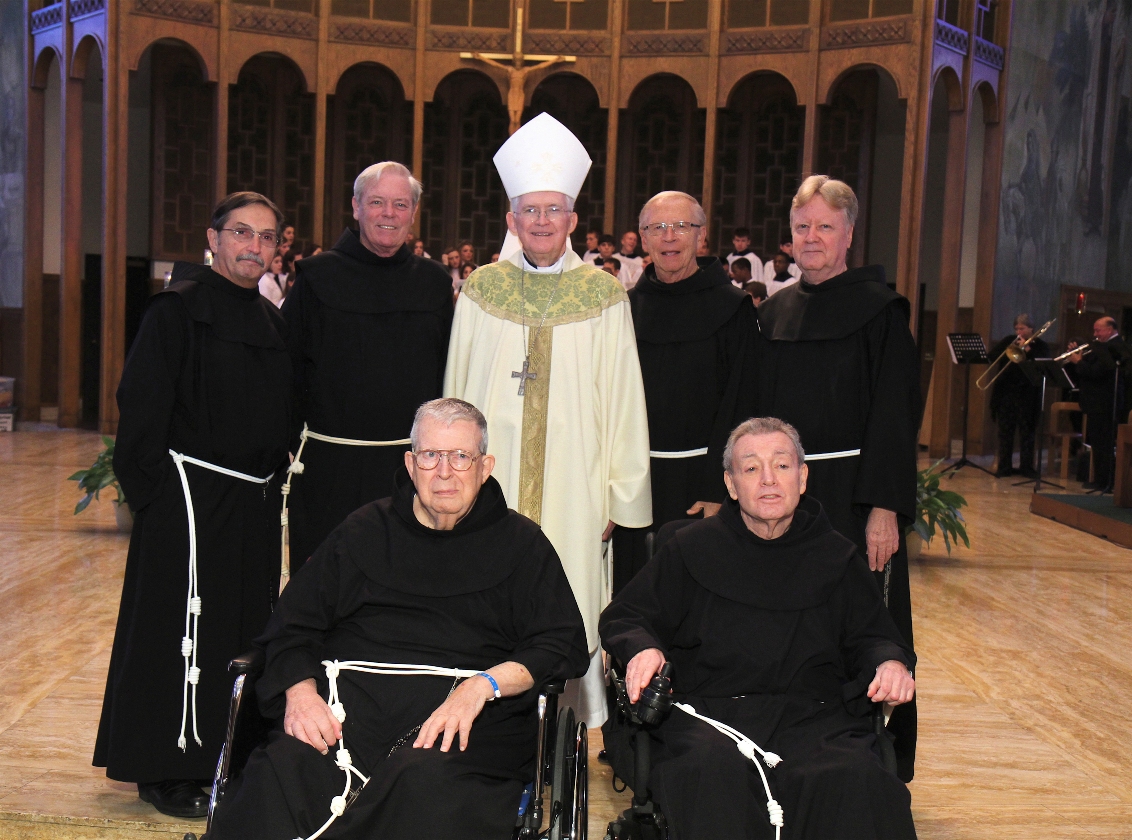 Brother De Sales Pergola, O.S.F.
Brother DeSales was born in 1927 in Brooklyn, New York of Catherine and Joseph Pergola (deceased). The family lived in the Boro Park Section of Brooklyn where he attended St. Jane Frances de Chantal Elementary School, and then St. Michael’s Diocesan High School run by the Xaverian Brothers. It was while at St. Michael’s that he thought of a vocation to religious life. During his senior year he enlisted in The United States Army and served for two years. When he returned to the United States he finished high school and upon graduation attended St. Francis College. It was at the College that he met the Franciscan Brothers and knew that this was the life he wanted, entering the novitiate in Smithtown, New York in 1949.

He received the Habit on August 2nd, 1950 the Feast of the Portiuncula and on the Feast of St. Francis, October 4th, 1950 received the religious name Brother DeSales. After profession of vows he was assigned to Our Lady of Lourdes on Aberdeen St., from 1950 to 1954. His next assignment was teaching Latin and Religion at St. Francis Preparatory Academy from 1954 to 1958. In 1957 the Diocese of Rockville Centre was established and St. Anthony’s Juniorate opened its doors to young men as an academic high school. He taught English, Latin and Religion there from 1958 to 1960. In 1959, Brother De Sales received his M.S. in Library Science from Columbia University. He returned to the Prep in 1960, becoming a full time librarian in 1968, and remained at St. Francis Prep until his retirement in 2000.

During his years at the Prep, Brother De Sales was moderator of the Mothers Guild, the swimming and judo teams and the National Honor Society. Brother De Sales also served on the Middle States Accreditation team and the Brothers Senate of the Diocese of Brooklyn as Vice President and Secretary.

He currently resides at Ozanam Hall, where his day is full and enriching; meeting many of the residents and their families, listening to them, praying with them, and giving words of encouragement. The words of St. Francis “Always preach the Gospel and sometimes use words” have taken on new meaning as Brother DeSales continues to celebrate sixty years of Religious life.

Brother Antonio Montera, O.S.F.
Brother Antonio was born in the Ridgewood section of Brooklyn, the fourth of five children of Pasquale and Theresa Montera. He attended P.S. 116 through 6th grade, graduated from St. Brigid’s School in 1954 and Bishop Loughlin Memorial High School in 1958. After spending a year attending St. John’s University in Brooklyn, he entered the Franciscan Brothers’ Novitiate in Wyandanch on the Feast of St. Bonaventure, July 14, 1959, and received the Habit on the following February 2nd.

In 1962 he was professed and spent the next three years at the Scholaticate in Brooklyn, eventually receiving NYS mathematics certification and degrees from St. Francis College and New York University.

In 1964 he began teaching at St. Patrick’s School on Kent Avenue in Brooklyn, followed by St. Aidan’s School in Williston Park, and Our Lady of Good Counsel School in the Bedford Stuyvesant section of Brooklyn. From 1967 to 1973 Brother Antonio taught Religion at Bishop Ford High School in the Park Slope section of Brooklyn. This was followed by five years at St. Anthony’s High School in Smithtown and six at La Salle Military Academy in Oakdale teaching Math.

Brother returned to teaching at St. Anthony’s in 1984 and was part of the move from Smithtown to South Huntington. In 1988 he became Registrar and has continued in this capacity since that time.

Brother Gary Gaynor, O.S.F.
Brother Gary Gaynor was born Leonard to the late Helen (nee Callaghan) and Gerard Gaynor in 1942, the youngest of three sons. Brother Gary attended Our Lady of Good Counsel Elementary School and St. Francis Prep High School. While at St. Francis, he played football and generally had a good time. After graduation in 1959, he entered the Franciscan Brothers and made his novitiate in Deer Park and Upper Brookville.

Brother Gary was professed in January 1962 and was assigned to the Scholasticate. He attended St. Francis College, receiving his B.S. in Mathematics in 1964 and was assigned to St. Francis Prep where he taught Math. Brother Gary then taught at St. Anthony’s and Bishop Ford High Schools. After receiving his M.S. in Mathematics from Adelphi University, Brother Gary returned to St. Anthony’s for 23 years. Besides his teaching duties, Brother Gary coached the school’s first football team and then became the varsity soccer coach. He started a summer soccer camp and was named CHSAA “Coach of the Year” several times. During this time, Brother Gary developed a course in study skills and traveled the country holding seminars for high school teachers on how to teach study skills.

In 1997, Brother Gary became a member of the Faculty of St. Francis College where he presently teaches Mathematics.

In the past, Brother has volunteered as an overnight and weekend manager for homeless shelters sponsored by the Brooklyn Heights Coalition for the Homeless and for Christian Help in Park Slope (aka CHIPS). He is a charter member of the Franciscan Brothers Finance Board on which he has served for over thirty-five years.

In recent years, Brother has given his time and talents to assisting the senior citizens of Bishop Boardman Apartments. Brother is a member of the St. Michael’s High School Alumni Board and Leadership Committee. He is also a lector, extraordinary minister, and prayer leader in his family parish of Our Lady of Czestochowa.

For the past ten years, Brother Jeremy has worked for the Diocese of Brooklyn as the Associate Director of the Pontifical Mission Societies, popularly known as the Society of the Propagation of the Faith and also with the Holy Childhood Association. Brother retired from the active apostolate September, 2009 and resides at Our Lady of Angels Friary in Bay Ridge, Brooklyn.

In February of 1960, Anthony entered the Franciscan Brothers of Brooklyn to begin his novitiate training, first in Wyandanch and then in Upper Brookville, Long Island. He took the religious name of Armand after a Daughter of Wisdom who took care of him at St. Charles Hospital and who remained a close friend thereafter.

Following the Novitiate, Brother Armand attended St. Francis College, while residing in the Scholaticate on Pierrepont St., Brooklyn Heights. He pursued a degree in Philosophy with a minor in Theology. During college, Armand taught remedial reading at St. Joseph’s in Babylon on Saturdays.

Following graduation from St. Francis College, Brother was assigned to Bishop Ford High School in Park Slope, Brooklyn. While at BFHS, he taught Theology and Psychology and then became a member of the Guidance Department. He began and completed his Master’s degree in counseling at Long Island University. Brother was the moderator of student activities, moderator of the music department, and Religious Faculty Representative. He also served as the Coordinator for the Brothers residence for a time. During his final year at BFHS, he, along with three other Brothers opened an experimental Friary on the second floor of a private home a few blocks from BFHS, the focus of which was to live as simply as possible, in order to contribute excess money to charity.

In the years to follow, Brother ministered at the following: St. Aidan’s Elementary School as School Counselor and Friary Coordinator; St. Joseph’s Elementary School as Principal; Camp Counselor and Infirmarian at Camp Alvernia (summers); Mercy High School, Riverhead, NY as Guidance Director; La Salle Military Academy, Oakdale, NY as Director of Resident Life for students from Spain, and Latin American countries who came to LaSalle to study English (Brother also taught Psychology at the Academy) and served as principal of Our Holy Redeemer School and Sacred Heart of Jesus and Mary School.

During his years at Sacred Heart School in Bayside, Brother attended St. John’s University to pursue a Professional Diploma in Rehabilitation Counseling in order to find work as a counselor for people with disabilities.

In August of 1989, Brother Armand was hired as a Case Manager at the National Center for Disability Services in Albertson, NY, now named ABILITIES!. In October of 1992, Brother began his current position as School and Transition Counselor at Henry Viscardi School a division of ABILITIES!. Henry Viscardi School is a state supported school serving the educational and therapeutic needs of students, pre-K through age 21, with physical disabilities and other health impairments. This work continues to be a very rewarding experience for Brother Armand, one in which he states, “I receive more than I give.”