The maintenance is scheduled to take place on the following days: June 21, June 22, July 11, July 13, August 1, August 3, August 16, and August 17. If you experience any problems accessing any of these applications during these dates, please understand the application may be down for migration. SFC IT will be sending out notifications when systems are back online. Thank you for your support and patience during this process.
Academics
February 21, 2017

The spirit moved civil rights pioneer Bernard LaFayette to end his talk at St. Francis College on February 21, 2017 with a song. From original Freedom Rider with now Congressman John Lewis, to a close confidant and organizer with Martin Luther King, Jr., Bernard LaFayette has spent his lifetime fighting for justice and equality through non-violence.

"The reason I'm doing the work I'm doing now in terms of Kingian non-violence training is because of the last words I had with Martin Luther King in Memphis, Tennessee in room 306," said LaFayette who was working with King on a press statement he was going to deliver in Washington, D.C. "Martin Luther King said, 'Now Bernard the next movement were going to have is to institutionalize and internationalize non-violence.' OK. Comma. To be discussed later. Five hours later as I landed there in National Airport nobody was there to pick me up." 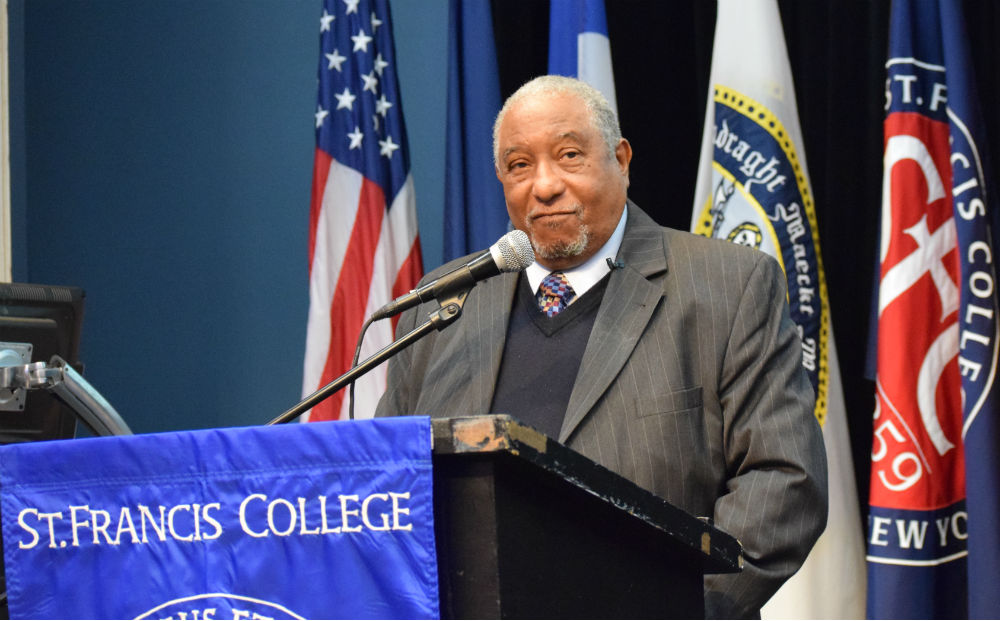 LaFayette said after he landed, he found out people were rioting because King, Jr. had been shot. A short time later while on pay phones with news organizations at the airport, he got the news that King was dead.

That non-violence training led him around the world; to Nigeria, where more than 60,000 former militants laid down their arms; to South Africa; and to Colombia where LaFayette was kidnapped for a short time by the FARC terrorist group. He has also started a number of non-violence training programs in the United States; including in Florida, Texas, and Green Haven Correctional facility in New York.

"The irony of the thing is I've met people who have followed in that path from Green Haven prison. The results," said LaFayette, referring to St. Francis College Criminal Justice Major Felix Colon '18 who went through LaFayatte's non-violence training program. "They say you cast your bread on the water and it will return. I'm looking at returns and the returns look good to me."

LaFayette took questions from the audience and shared stories of his civil rights battles, including the pivotal white mob attack on Freedom Riders at the Montgomery, Alabama bus station in 1961 and his first major act of non-violent resistance.

LaFayette was a young child, waiting to bring a coffee order back to store owners in Ybor City when he sat on a stool at the counter of the restaurant.

"I remember when our eyes met, that moment of truth. I was sitting on that stool, age 7, he was looking at me. He stopped making coffee. He looked out the window, made sure nobody was looking. I never flinched. I never blinked. I never frowned, very calm and confident, from that moment on I sat on the stools."

He said it was experiences like that which prepared him for the sit-ins in Nashville and other major actions.