Skip to main content
Upload Proof of Vaccination
Reminder: All students, faculty, and staff must be fully vaccinated against COVID-19 and upload proof as a condition of accessing College buildings (including the residence hall) during the 2021-2022 academic year.
Academics
September 19, 2013

Gavin de Becker, a leading expert on predicting and managing violence and author of The Gift of Fear, spoke to a standing room only audience about the importance of intuition, the danger of denial, and how the battle between these two impulses lie at the root of our survival on Tuesday, September 17 at St. Francis College.

De Becker began by stressing the importance of listening to intuition. Over the course of numerous interviews with crime victims he discovered that at the beginning of their conversation, a victim would say they had no idea anything was wrong, but as they recounted the various incidents, they come up with a series of observations indicating that they were entering an unsafe situation. 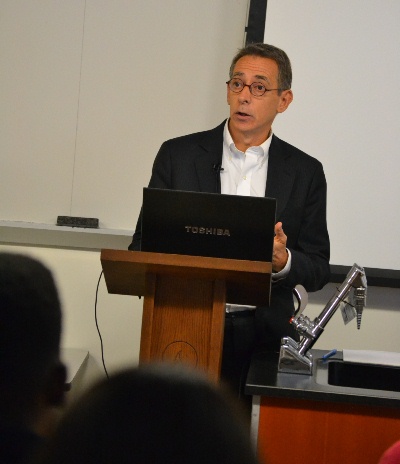 He said that while our intuition may not always be right, it is always in our best interest because it is an unconscious act with only one purpose, survival.

Our powers of denial, however, are always at odds with our intuition, says de Becker. He says denial is unique to humans and gave the example that while a woman would walk into an elevator with a suspicious person, you would never see an antelope enter an enclosed space with a lion. For that reason he stressed that in times of crisis do not cross examine your feelings.

De Becker also took aim at local news saying that their attention to tragedy muddies our ability to properly listen to our intuition. “It is likely that not a single thing you see on the local news will ever impact you in your whole life,” said de Becker. He cautioned that this type of news coverage creates unwarranted fears which are based on imagination and pushes out true fears that come from our environment.

In offering safety tips to a younger generation, de Becker counseled that ‘No’ is an appropriate answer for a young woman and does not need an explanation. He said in our society, “When a man says ‘No’ it's the end of a discussion, but when a woman says 'No,' it's often the beginning of a negotiation.”

Gavin de Becker’s lecture was first in the Fall Semester series: Wrongful Convictions, Miscarriages of Justice, and Other Critical Perspectives on the U.S. Criminal Justice System presented by Emily Horowitz, Criminal Justice Professor and Director of the Institute for Peace and Justice. Upcoming lecturers include:

All lectures are free and open to the public and begin at 11:10am in Room 4202. Learn more about these events from the Institute for Peace and Justice at sfc.edu/peace.