The maintenance is scheduled to take place on the following days: June 21, June 22, July 11, July 13, August 1, August 3, August 16, and August 17. If you experience any problems accessing any of these applications during these dates, please understand the application may be down for migration. SFC IT will be sending out notifications when systems are back online. Thank you for your support and patience during this process.
Academics
July 22, 2019 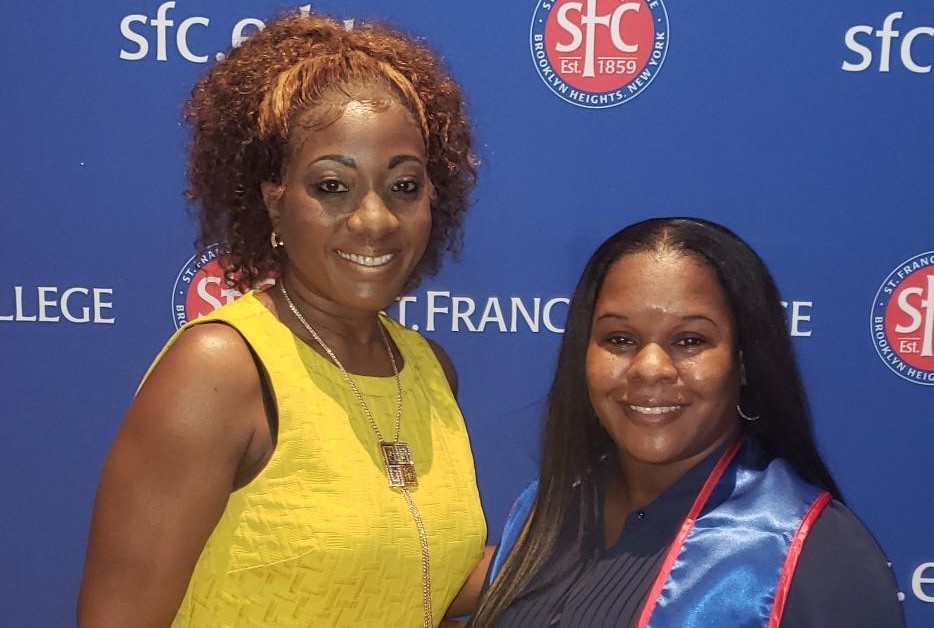 When Deedee Fields first enrolled in St. Francis College in 2001, she didn't know she was embarking on what would be an eighteen year journey to the graduation stage.

Deedee took coursework at St. Francis over several years in the early 2000s, working towards a degree in Criminal Justice with hopes of a career in law enforcement.

When the New York Police Department offered her a full-time job in 2007, however, Deedee grabbed the opportunity. She left her academic studies behind just shy of earning her degree.

Over the next decade, Deedee rose through the ranks of NYPD. In recent years, she reconnected with St. Francis to see about finally finishing what she started in 2001. This Spring, she became part of "Terriers Come Home," an initiative headed by Dr. Gale Gibson Gayle, Assistant Vice President of Online Learning and Program Development (pictured, with Deedee on right), to help former St. Francis students attain the outstanding credits they need to earn degrees, including by awarding credits for professional experiences.

St. Francis College conferred Deedee a B.A.in Professional Studies at a ceremony on July 15th. She is now considering returning to St. Francis for a master's degree in Management.

Here is her story.

What was your original relationship with St. Francis?

When I first enrolled in 2001, I was much younger and starting out my career. So I decided that I was going to be a student with St. Francis and see if I can better my career as far as getting my education.

During the time [I was enrolled at St. Francis], I was offered to take the test with the police department...My career was important to me...I kind of put that before school, which I should not have done at that time, but I was much younger then.

I became an employee of the NYPD at the end of 2007. I was nine credits away from getting my degree...I made that decision as a single mom to be a provider for my daughter at that time. So it was more important to choose a career versus finishing school.

I have been with NYPD ever since [2007]. I have moved up, as far as my rank. I started out as a police officer and then I went to detective third grade and I am now a detective second grade. I truly believe that the police department was a blessing.

How did you make your way back to St. Francis as part of "Terriers Come Home"?

I reached out a few years ago to Dr. [Emily] Horowitz, [one of my former professors], to see if I could come back to St. Francis. And she reached back out to me and said, "I can...see what we can do."

I [then] waited a little while because...I got promoted at work, so I didn't get a chance to follow back up with her. But then she emailed me again. She put me in contact with Dr. Kathleen Gray [Assistant Vice President, Academic Affairs and Dean of the Curriculum & Student Support] and the next day [Dr. Gray] reached out to [Dr. Gayle] and everything happened. And that was in May of 2019.

How did you acquire the credits you needed for your degree?

I was supposed to take nine credits, which was, I think, three different electives. It wasn't anything major. But the fact that I had 44 credits [from training courses] with the New York City Police Department, I was able to transfer them over. I could get my degree without taking any further classes.

I had to provide St. Francis with my NYPD transcript. After [Dr. Gayle] reviewed how much experience I had from the 12 year period [with NYPD], with all of the certifications I had, she was able to see that I was more than qualified to receive my degree.

Does having your degree open up new career opportunities for you?

It can. If I decided to further my career as far as becoming a supervisor or a sergeant or lieutenant, the degree will help in moving up the ranks. It also helps if you are looking to retire and work for a different agency or do some part-time work with law enforcement in other agencies. It can assist you greatly.

What's the message that you would give your younger self as far as finishing your education?

Don't wait too long because there's a lot of catching up to do and things change. I've been gone for 12 years, so a lot of the academics and the personnel change.

I waited many years for [my degree] and part of my going to school late was because I was a single mom. My husband is a retired New York City Police Officer. My daughter is now 25 years old and is currently in college. She has a full time job. It worked out very well.