Skip to main content
Upload Proof of Vaccination
Reminder: All students, faculty, and staff must be fully vaccinated against COVID-19 and upload proof as a condition of accessing College buildings (including the residence hall) during the 2021-2022 academic year.
In the Spotlight
October 15, 2019

In the Spotlight: Rochella Providence '20, Management Major; Intern With Clip 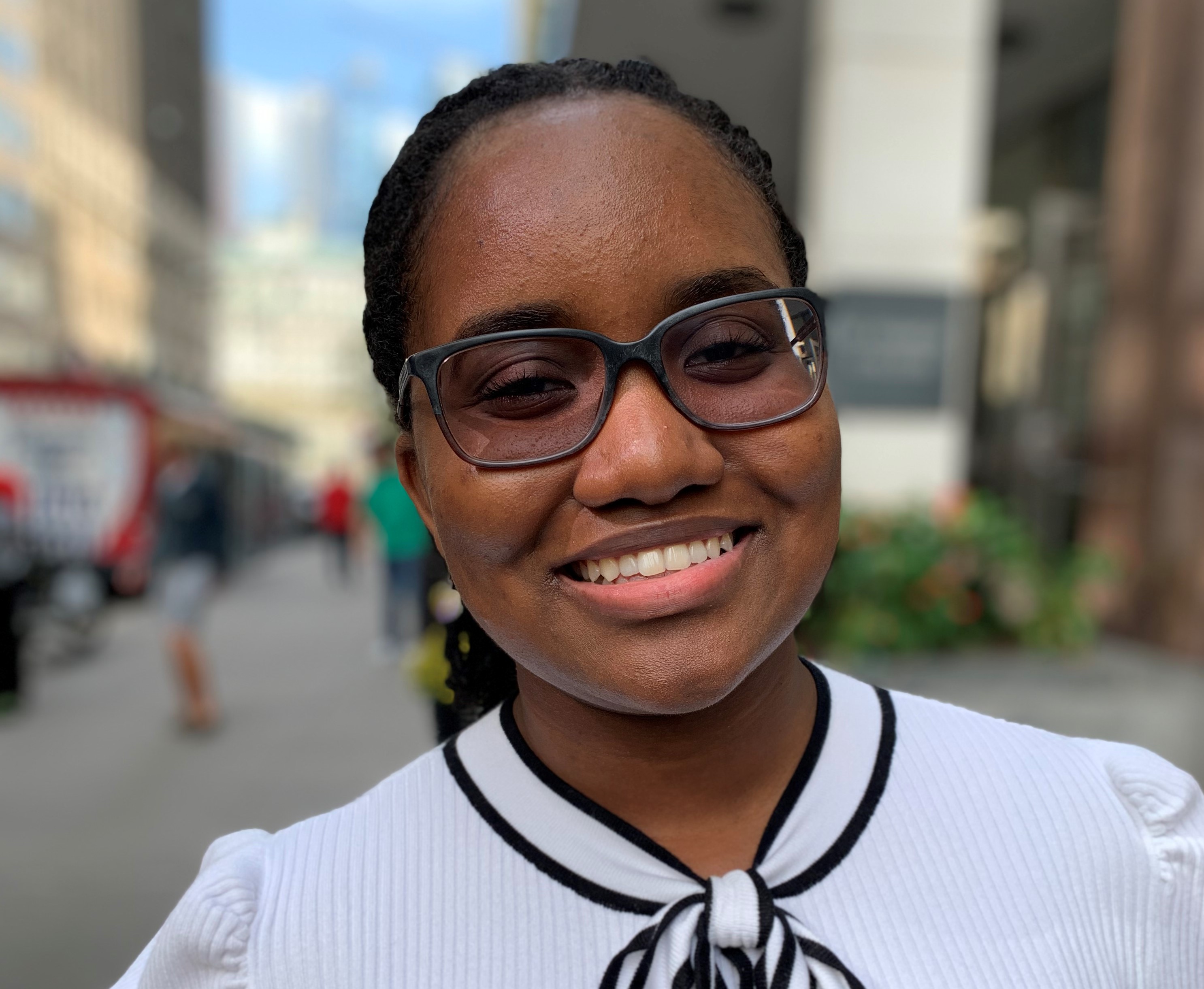 Rochella Providence took a long journey from her home in Trinidad & Tobago to enroll in St. Francis College, an institution she had never visited until she walked through the doors as a member of its student body.

Rochella is now taking another leap into her future. She is interning with CLIP, an early-stage start-up that makes a device to turn any standard bicycle into an electric bike. The company – which exceeded its fundraising goal through a Kickstarter campaign -- is taking pre-orders now. Production is expected to start later this year. Rochella is helping to ensure CLIP's go-to-market strategy succeeds.

Rochella's internship overlaps with her last semester at St. Francis. She will collect her degree at the College's commencement ceremony in January 2020. She reflected on her time at St. Francis and her current gig.

My goal was to come to the U.S. to study, because my mom was living here in New York. In Trinidad, I went to a school that prepares you to take the SATs. The president of the school recommended St. Francis College. She said it's a good school and a lot of people go here from Trinidad. She put it on my list.

My first visit was actually at the orientation for admitted students.

What are the highlights of your time at St. Francis College?

I would say my study abroad experience was the highlight of my college experience. Being able to go to Europe and learn another language and be immersed into the culture.

I studied abroad in Segovia, Spain. I was a part of a program led by Dr. Sintia Molina [SFC Spanish language coordinator] and Dr. Ricardo D'Augusta [Director of Centro de Estudios Hispánicos de Segovia]. We were hosted in Segovia for the semester, but we went to all parts of Spain: the south, the north, the east, the west. It was great. That was fall 2018.

Have you done internships prior to your current one?

In spring of 2017, I had an internship with two lawyers on Court Street, Brooklyn. The company was called Gustman & Henry LLP. That was a very interesting experience. I learned a lot of useful information about the law, especially personal injury law.

How did you get that internship?

I went to the Career Center trying to make sure my resume was up to date. I told Brother Greg [Cellini, SFC Franciscan Advisor], that I wanted an internship, something law-related because I was interested in law school. He happened to get [the opportunity] at that same time. I applied and I got it.

You have another interesting internship currently. Can you tell me about it?

The company is called CLIP and I started September 12th.

It was founded by two guys, Som [Ray], a MIT Design Technologist and Clem [de Alcala], a Global Operations expert. They designed an amazing device, a portable electric motor that you can carry along and turn any bicycle into an electric bike, instantly. They operate out of New Lab in Brooklyn Navy Yard. That is basically an innovation hub for startup companies focusing on cutting-edge technology, design and engineering.

How did you land it?

I was on Canvas [SFC's learning management platform] and, as a management student, we have an online announcement page for job opportunities and things like that. I saw the announcement. I saw the company was getting a lot of press attention. I was like, "that'd be something cool to be a part of." I said, "okay, why not apply and see what happens?" I applied, they got back to me, I got interviewed and the week after the interview I found out that I got in.

What appealed to you about this opportunity?

I immediately gravitated towards the idea because I think it is really brilliant. It is a very early-stage start-up. The team is very professional and they're getting a lot of support from other major companies and startups. I think it's amazing to be a part of the whole process because you have the opportunity to learn so much. You're starting from scratch. It's really exciting because you don't know what's going to happen, but I feel like great things are going to come out of it.

What are you responsible for there?

My title is community manager. Right now, I'm managing the online accounts, social media. I have to pitch the product to bloggers and journalists and try to get them interested and see if they would be willing to write about CLIP.

Did this internship spark ideas of becoming an entrepreneur after graduation?

What professors were most instrumental to you here?

I took Business Law 1 and 2, with Professor Miriam Salholz. It was because of her that my passion for law was sparked. My other professor was Dr. Sintia Molina, my Spanish teacher. She has passion for the language, and I really love passionate teachers. When I see that they're passionate about what they teach and how they teach, it inspires me to learn more and get better.