The maintenance is scheduled to take place on the following days: June 21, June 22, July 11, July 13, August 1, August 3, August 16, and August 17. If you experience any problems accessing any of these applications during these dates, please understand the application may be down for migration. SFC IT will be sending out notifications when systems are back online. Thank you for your support and patience during this process.
Academics
November 17, 2019 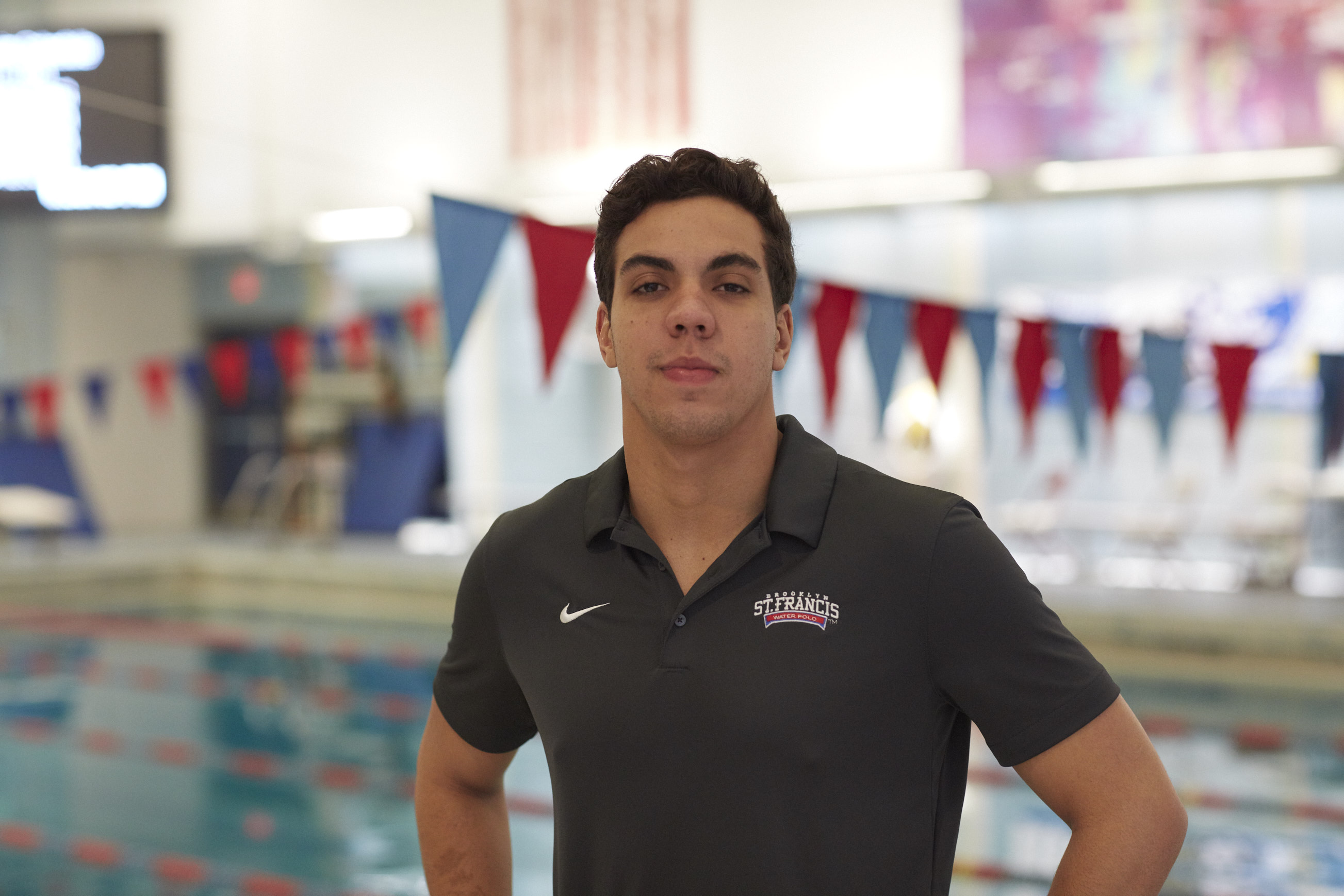 Tadeu Rodrigues selected St. Francis College to pursue his Water Polo collegiate career, after achieving considerable success in the sport while growing up in Rio de Janeiro, Brazil. He and his SFC teammates will wrap up a winning 2019 season with the Northeast Water Polo Conference tournament later this month, Tadeu's final games wearing the Terrier uniform.

During his four years here, Tadeu hasn't just made a mark in the pool, where he also competes as a member of the Swim Team. His GPA earned him membership in Sigma Beta Delta, the honor society for Management majors. He works in SFC's Marketing and Communications office, helping create and post content on St. Francis' website and campus digital screens that keeps the community informed about the College's many events.

Tadeu reflected on his journey at St. Francis College, and what it's like to be an international student here.

I had a Brazilian company working with me that recruits for sports [at U.S. colleges].

They sent me the link to the St. Francis College website. I started researching. I saw the location, I saw that it's affordable and it has a great water polo program. I also knew there were some Brazilian players here [at St. Francis College]. I contacted them and learned how the process worked, how to take the exams, how to make a [recruiting] video.

I decided that water polo would be my door to come to the U.S. Water polo was 95% of my decision to attend St. Francis.

Why did you want to come to the U.S. for college?

It was always my dream to come to the U.S. It's a crazy dream I'd had since I was a kid. I saw that going to school here was the perfect opportunity. I just decided to go for it.

How did you become a water polo athlete?

I was a soccer player first. I was 10 and was at a new club [for soccer] with a pool. There was a water polo practice [going on]. The coach asked if I wanted to try, and I said "yeah, sure." The next day I jumped in the pool, and the coach saw I was a lefty, which is a big thing, and I had a strong shot because I used to be a [soccer] goalie. He said, "we want you on the team."

The funny story is I was bad at swimming. My coach told me, "you're really good at it [water polo]. We want you to play at the highest level with the older guys, but you need to improve your swimming. I can give you swim sets for the whole summer." So that's how I got better.

I ended up playing a tournament in Italy, and we won. I won, I think, three national championships. I was just really putting my mind into it. I love the sport. I'm very grateful for it.

What's been the best thing about being part of the Water Polo team here?

What is your best St. Francis water polo memory?

This is very recent. My senior night. It was amazing because there were 10 seniors. I don't think we ever had that many seniors graduating at once. The entire aquatics team -- my teammates -- they made posters with my name and the crowd had [signs with] my face. They were just screaming my name.

It was so exciting to play that game. We won. I was named Player of the Game. It was a very happy moment and topped off my career at SFC. It was memorable.

How did you decide to study Management at St. Francis?

That was one of the hardest decisions of my life. As hard as moving to the U.S. When I went to college in Brazil [before enrolling at St. Francis], I was studying law and I loved it, even though it was very hard. When I decided to move here, I knew I couldn't study law here because it's just not the same.

My second choice was marketing. I always liked the idea of delivering customers what they want. I always felt like I was good at it, at least that's what my mom said. I had an acting course when I was a kid and one of the exercises was to sell a hat. Apparently, I did well. I always had this idea that I knew how to sell.

What stands out academically about your years at St. Francis?

One class, Introduction to Entrepreneurship, I'll always remember. The professor, Samuel Pierre, was great. It didn't seem like a class. He was teaching us in an informal way how to create a business and have a business mindset. After the class was done, he helped me with my career. He was a mentor.

What's it like being an international student at St. Francis?

It's the best environment. People really understand what you need. My freshman year, my English wasn't that good. People would let me make English mistakes. Even in classes. They're just very welcoming.

It's insane how many faculty members or even the President know who I am. They know how to say my name, which is a big thing because my name is not easy to pronounce. I think people here apply Franciscan values every day [when interacting with any] type of type of student, no matter where they're from.

What do you say to other International students considering coming here?

Don't be scared. I was scared. I mentioned it was my dream to come here, but when I actually did it, when I had the offer, when I booked the tickets, I was like, "wow, I'm actually doing it. I have to pack my stuff and come."

Just go head first, and it pays off. No matter if you want to live in the U.S. or you want to go back home.