The maintenance is scheduled to take place on the following days: June 21, June 22, July 11, July 13, August 1, August 3, August 16, and August 17. If you experience any problems accessing any of these applications during these dates, please understand the application may be down for migration. SFC IT will be sending out notifications when systems are back online. Thank you for your support and patience during this process.
Academics
February 7, 2011

Is the New York Times Good for Democracy?

The question, Is the New York Times Good for Democracy? cast the opposing speakers far apart ideologically in their panel discussion at St. Francis College on Monday, February 7 at the College, but Michael Tomasky, Editor of Democracy: A Journal of Ideas and American Editor-at-Large of The Guardian and William McGowan, author of Gray Lady Down (Encounter Books)were both brought further to the center as the night continued. (Watch the New York Times Debate) 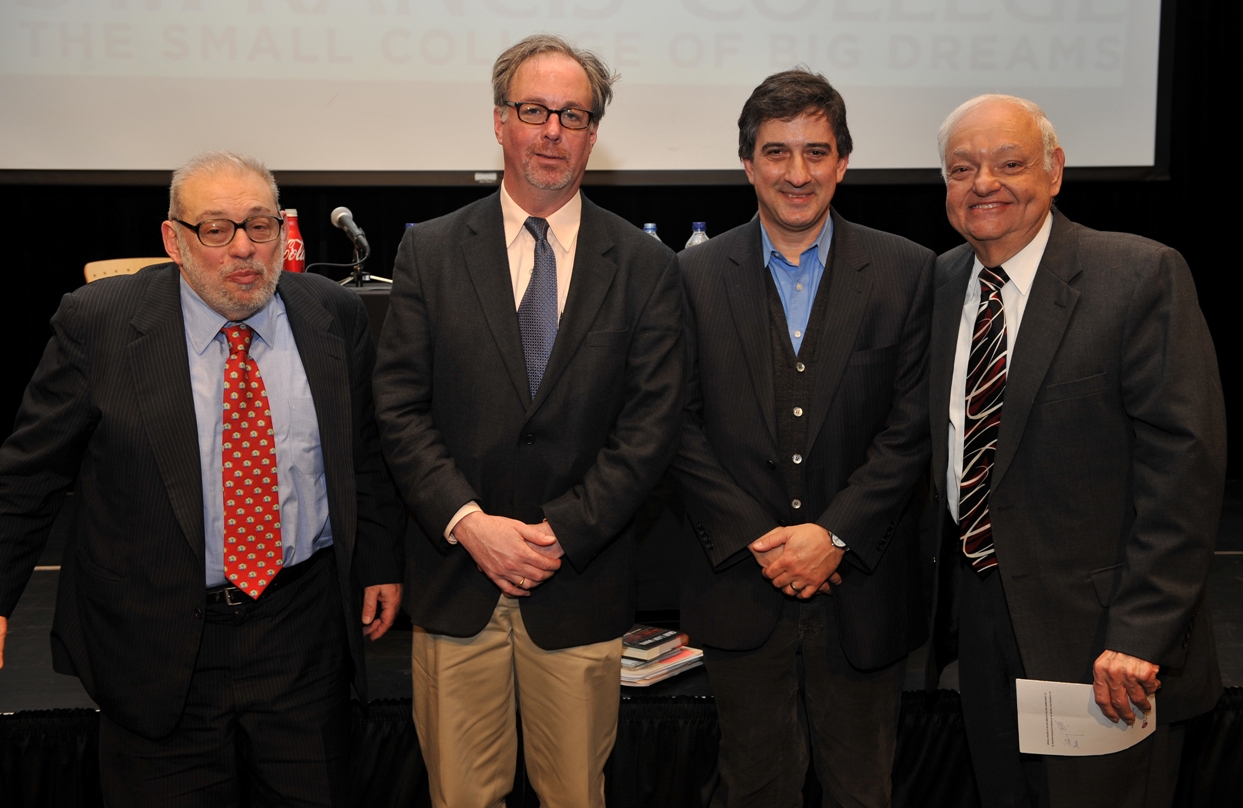 Siegel set the stage by pointing to the debut of The Daily, an online only newspaper being published by Rupert Murdoch, AOL buying The Huffington Post and The Daily Beast taking over Newsweek as signature events showing the power of the Internet in influencing the future of journalism. He also admitted that the more appropriate question for the night would have allowed for more nuanced answers regarding the New York Times.

William McGowan began his talk by looking back at 1972 and the National Review’s article, “Is it True What They Say About the New York Times?” which found that the Times news pieces were, in fact, not influenced by the papers left leaning editorial board. For his book, Gray Lady Down, McGowan conducted a new review and found several hundred instances of what he claims are biases in what are supposed to be objective news pieces especially on issues of immigration, Islam in America, race and the War on Terror. While McGowan does not go as far as some critics in dismissing the paper he sees it as a shell of its former self, prone to journalistic and institutional blunders and scandal, which makes it bad for democracy and democratic discourse especially on the aforementioned issues.

Yet he says, “I don’t advocate going Times-less in the least. I don’t think the Times is treasonous.” He added that while the Times may once have been the gold standard of journalism, its status is now much diminished from that peak. He also admits that the Times news gathering is still a valuable commodity because at this point, new media and many other news outlets still do not have the resources or command the authority that the Times still holds.

Michael Tomasky, said that although he’d been cast as the defender for the Times, his current position working for The Guardian actually puts him in direct competition with the paper and while he is a proud liberal he is himself, also a sometimes critic of the Times. Tomasky sees the calls of bias by McGowan as having more to do with conflict between the status quo and a changing world than pushing of a political agenda.

“The Times is reflecting changes, arguments and tensions in society that not only the Times is grappling with but many other institutions are grappling with,” said Tomasky, adding that for the Times to better report on the city where it is based and the world beyond, over the last forty years it has had to alter its staff composition from largely white male to one employing women and minorities. “The country has changed, the culture has changed.” Tomasky continued that he thinks most of that change has been good and thinks most people feel the same way.

Past forums hosted by St. Francis College and the Manhattan Institute include The Role of American Elites in U.S. Politics, Independent Voices of the Middle East and Are the Tea Parties Good for New York?

The next forum is scheduled for March 29 and will feature State Assemblyman Richard Brodsky and senior fellow at the Manhattan Institute and the Empire Center for New York State Policy E.J. McMahon debating the New York State budget.