The maintenance is scheduled to take place on the following days: June 21, June 22, July 11, July 13, August 1, August 3, August 16, and August 17. If you experience any problems accessing any of these applications during these dates, please understand the application may be down for migration. SFC IT will be sending out notifications when systems are back online. Thank you for your support and patience during this process.
Academics
October 18, 2013

Jeffrey Sachs, Director of the Earth Institute and a leading advocate for ending global poverty, was the guest speaker for the second Dr. Francis J. Greene Honors Lecture on October 16 at St. Francis College.

Sachs began his talk by describing how changes in technology, particularly communications technology, have been a driving force behind alleviating poverty. Then in a mixture of good news and bad news, Sachs said that within the foreseeable future there is a chance that no one will be living in extreme poverty (earning less than $1.25 a day). But he also noted that while the number of people living in poverty has gone down, income inequality, social unrest, and environmental degradation have gone up.

He addressed the need for what he calls a "holistic view of sustainable development" in which economic development, social inclusion of youth, women and minorities, environmental sustainability, and good governance are all tackled at the same time. Dr. Sachs noted that the United Nations soon will be launching Sustainable Development Goals which will serve as a model for this holistic approach.

Dr. Sachs ended the talk by stressing that addressing poverty and protecting the planet is at heart a moral issue. He said we already have the resources and tools to immediately fix the problem. We just need people to step up and lead the charge. Sachs spoke fondly of a recent meeting he had with Pope Francis, saying that the Pope's appeal, which goes far beyond just the followers of the Catholic Church, reflects the kind of moral leadership needed. "We need moral leadership. If we can find it, we will find our way to sustainable development. The choice is ours." 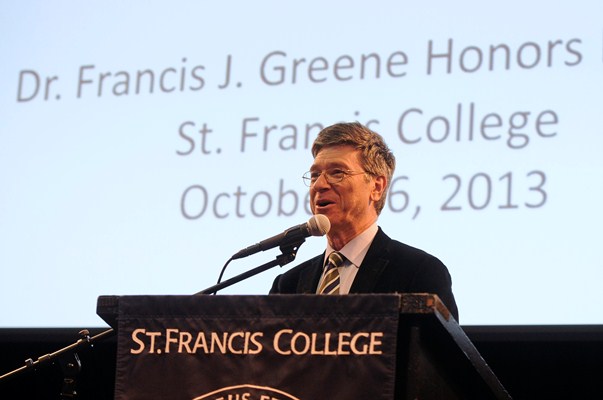 The talk was organized by the Director of the Honors Program, Dr. John Dilyard, and is part of a year-long Honors Program focus on a sustainable environment. This focus includes multi-disciplinary courses, special lectures, and community service by students and faculty in the program.

The lecture is named for Dr. Francis Greene, who has been a professor at St. Francis College for more than 30 years. Professor Greene founded the Honors Program and was the long-time chair of the Department of Foreign Languages, Fine Arts, and International Cultural Studies, where he still teaches. In addition, he is moderator of the Duns Scotus Honor Society and Co-Director of the College's Study Abroad program.