The maintenance is scheduled to take place on the following days: June 21, June 22, July 11, July 13, August 1, August 3, August 16, and August 17. If you experience any problems accessing any of these applications during these dates, please understand the application may be down for migration. SFC IT will be sending out notifications when systems are back online. Thank you for your support and patience during this process.
Academics
April 11, 2011

As an homage to the forgotten and seldom talked about minor characters in novels, speaker Kate Christensen (2008 PEN/Faulkner Award winner), read three scenes from her various books as the latest speaker in the Walt Whitman Writers Series as St. Francis College on April 11.

Christensen began the reading with a scene from The Epicure's Lament in which her character Hugo meets the hit man who failed to kill him twenty years before. She said the hit man is a sort of ghost of Christmas past, which helps her push her story forward without using flashbacks in the narrative. Christensen followed with a scene from The Great Man, in which a widow speaks to her husband's former best friend, who is essentially a reincarnation of the hit man. Finally, Christensen gave a preview of her new novel, The Astral, about an everyman poet displaced by an irrationally jealous wife from his home of thirty years in the legendary, sprawling Astral Apartments in Greenpoint, Brooklyn. The Astral goes on sale June 14. (Watch the entire reading) 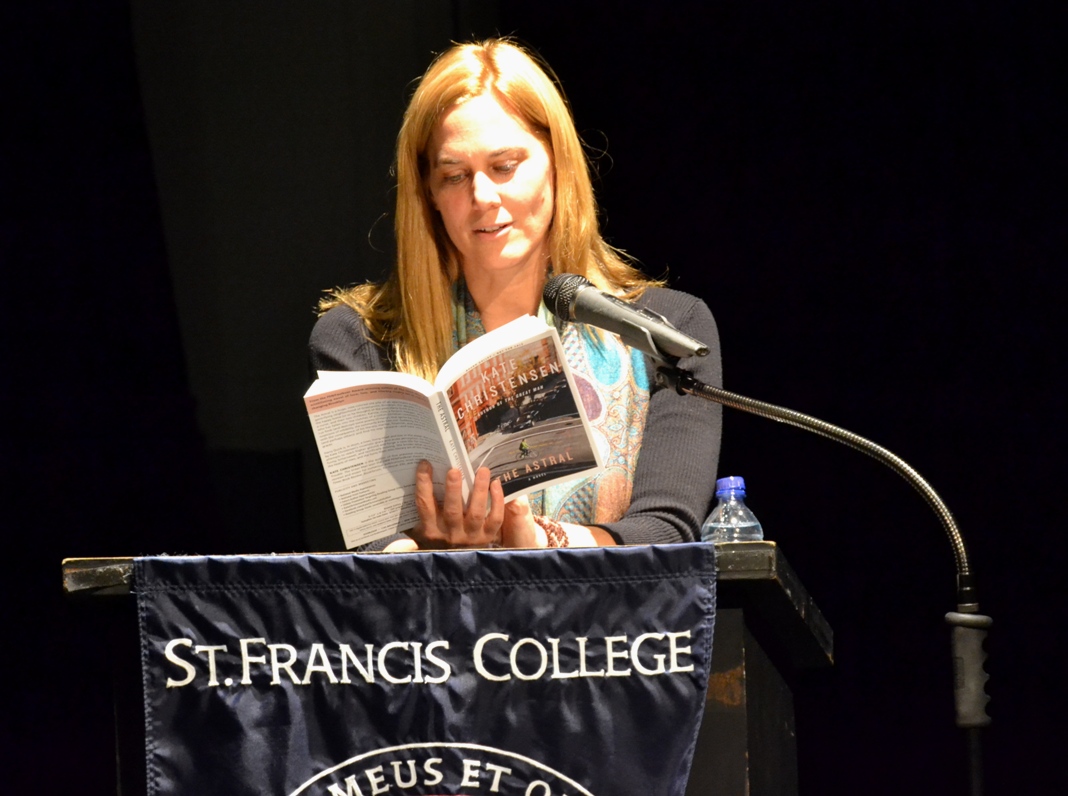 During the question and answer session, Christensen went into more detail about her approach to flashbacks. "I feel that there's a forward momentum in the book that has to be maintained by the writer," said Christensen, who admits to using them sparingly. "A book is like an arrow -- you shoot it out at the beginning of the narrative, and it should just fly entirely through the novel." (Watch an extended interview)

A question about an autistic character in The Great Man led Christensen to talk about her cousin with autism and her desire to build a relationship with him. "I had heard that autistic people can understand what you're saying even if they can't respond to it," she said. "We were the same age and I felt, this is my cousin, and I want to know him." Ethan's behaviors are based on her cousin, but she adds, "the mystery is so profound and you do project a lot, and who knows if it's right or wrong."

In addition to her six novels, Christensen is a prolific writer whose reviews and essays have appeared in numerous publications including the New York Times Book Review, Bookforum, Tin House and Elle.