Skip to main content
Upload Proof of Vaccination
Reminder: All students, faculty, and staff must be fully vaccinated against COVID-19 and upload proof as a condition of accessing College buildings (including the residence hall) during the 2021-2022 academic year.
Academics
June 17, 2007

The end of the spring 2007 semester at St. Francis College will bring many changes to the higher levels of administration at the college. Executive Vice President Richard Halverson, Ph.D., Vice President for Academic Affairs and Academic Dean Gerald Largo, Ph.D. and Athletic Director Edward Aquilone '60 are all stepping down from their posts as of June 30.

"It is with mixed emotions that I accept the resignations of Executive Vice President Halverson, Dean Largo and Athletic Director Aquilone," said St. Francis President Frank Macchiarola. "Dean Largo was an excellent source of information and knowledge for me when I first came back to St. Francis ten years ago. I have worked with Dick and Ed for decades, with our careers intertwining on several occasions in a variety of fields. Each time we reconnect, I am amazed at their level of competency and ability to serve their constituents. They will all be missed by me, the faculty and the students at St. Francis who now benefit from their experience."

"For any organization to grow over time, the lines of succession are vital," added President Macchiarola. "The people who will be filling these positions at St. Francis College will maintain our high level of professionalism and insure the quality of the services we deliver to our students and the community. I look forward to watching each of them continue to grow and mature in their new positions. Things will only get better for our 2,300 students and the whole St. Francis community as the College continues to expand."

Bogart has worked with St. Francis College President Frank Macchiarola for the better part of thirty years. They first met when Bogart was a Policy Analyst at the New York State Emergency Financial Control Board. Bogart also worked with Macchiarola at the New York City Board of Education, The New York City Partnership and as the Associate Dean for Administration at Benjamin N. Cardozo School of Law at Yeshiva University.

Before working at Cardozo School of Law, Bogart held two manager titles at Newsday and worked for the New York State Legislature.

Bogart holds a Bachelor's Degree from Montclair State College and a Master's Degree in Urban Affairs and Policy Analysis from The New School for Social Research.

His daughter Erin is a St. Francis College graduate.

June Carroll McGrisken, CPA '76
When June Carroll McGrisken, CPA graduated from St. Francis College with a Bachelor's Degree in Accounting and as a member of Duns Scotus Honors Society, a St. Francis Alum interviewed her for her first job as an accountant at Deloitte and Touche. A few jobs and several years later, she returned to St. Francis as Director of Student Financial Services. McGrisken became Controller, then Assistant Vice President for Finance and will become Vice President for Finance and Administration July 1.

McGrisken oversees the financial operations and budget for the College and will take on oversight of Human Resources, Facilities and Institutional Research.

Previously McGrisken worked at Polytechnic University as Controller and Executive Director of Budgeting and Planning. She also worked at Keyspan Energy Corp. where she held many positions, including Director of Financial Management and Director of Internal Audit.

McGrisken received her Master's Degree in Finance from Fordham University.

McGrisken's husband Ron and sister Elaine are both graduates of St. Francis and her two sons Ryan and Daniel currently attend the College.

Timothy J. Houlihan, Ph.D.
Timothy J. Houlihan, Ph.D. joined St. Francis College in 1999 as Assistant Dean of Academic Affairs. He was promoted to Associate Dean and will now assume the role of Vice President for Academic Affairs and Academic Dean. Houlihan will be responsible for developing new academic programs, sustaining and invigorating existing programs and overseeing faculty development as teachers and as scholars in their respective fields.

Houlihan previously worked at Long Island University as Associate Director of the Academic Advisement Center. He also taught classes there in the History Department, Honors Program and graduate program in United Nations Studies as well as at the Mercy College Extension Programs.

Houlihan received Bachelor's Degrees in History and Economics from Hamilton College. He holds a Master's Degree and Ph.D. in American History from Binghamton University with a focus on labor history.

After graduating she taught physical education and coached girls' basketball at St. Joseph by the Sea on Staten Island.

She returned to St. Francis College shortly after taking on the Women's Basketball Coaching position in 1988. She held that post for 11 years, earning accolades as the Northeast Conference Coach of the Year in the 1997-98 season. Garcia coached the first St. Francis women's student to play professional basketball, Carolyn Harvey '99. Her teams were known for academic excellence as well, with the 1998-99 team ranking fourth highest in the country for grade-point average.

Garcia earned her Master's Degree in Sports Administration from Brooklyn College. She currently manages the athletic department's budget and purchasing and is the Senior Woman Administrator. She is an active member of the Women's Basketball Coaching Association and the National Association of Collegiate Women Athletic Administrators. 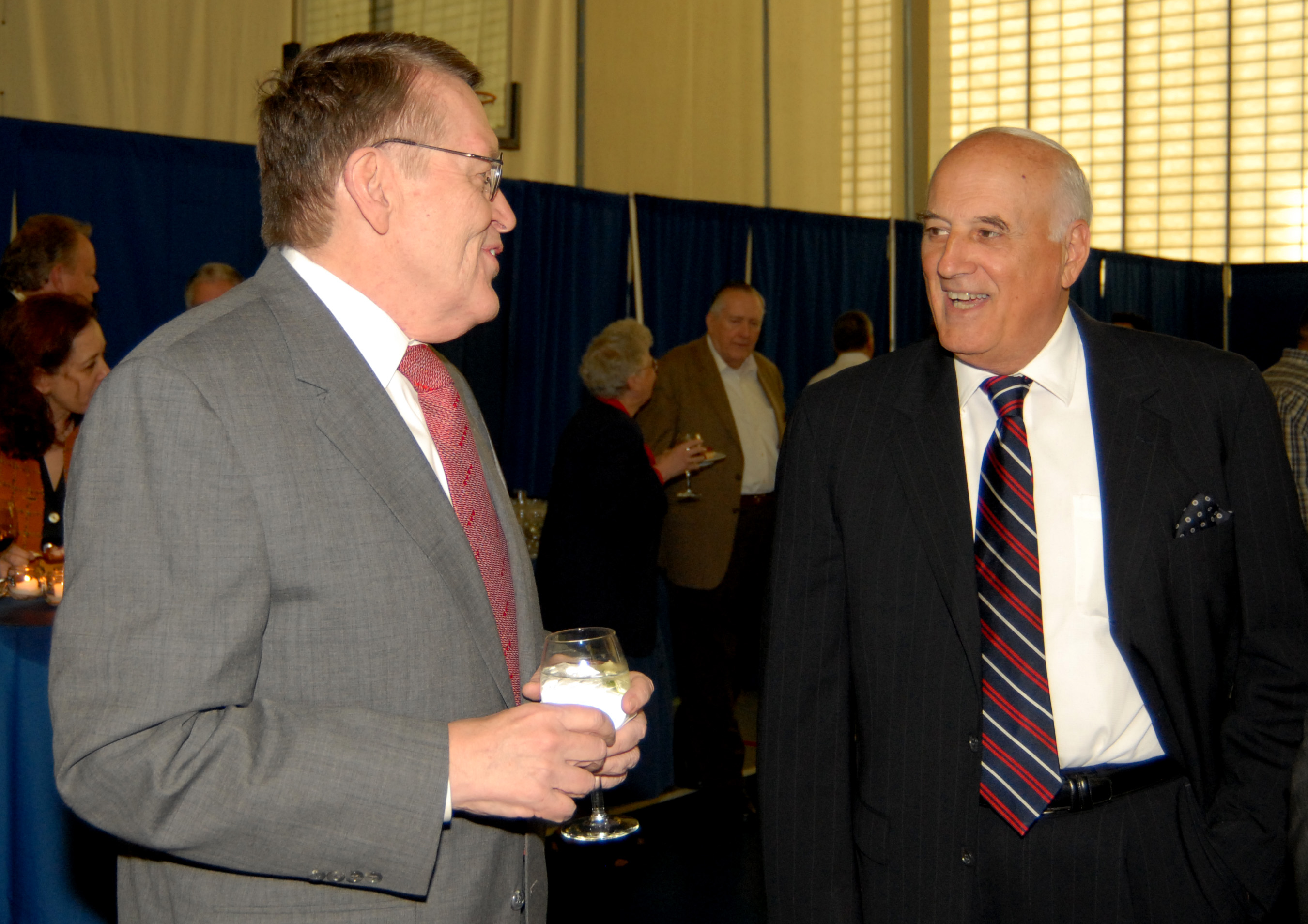 Halverson was also an assistant to Mayor Edward Koch advising on economic policy and the public schools. He served as CEO of the not-for-profit Historic Hudson Valley where he helped transform the organization into a leading preservation group and helped create the Hudson River Valley Greenway. He taught in the Master's of Public Administration Programs from the University of Dayton, Ohio. Halverson holds a Master's Degree and a Ph.D. in Political Science from Columbia University.

Gerald Largo, Ph.D.
Vice President for Academic Affairs and Academic Dean Gerald Largo, Ph.D. has been active in higher education for more than thirty years. He joined the St. Francis College faculty in 1975 and has served as Chair of the Religious Studies Department and Director of the Honors Program until he was named to his current position during the 1995-96 school year. 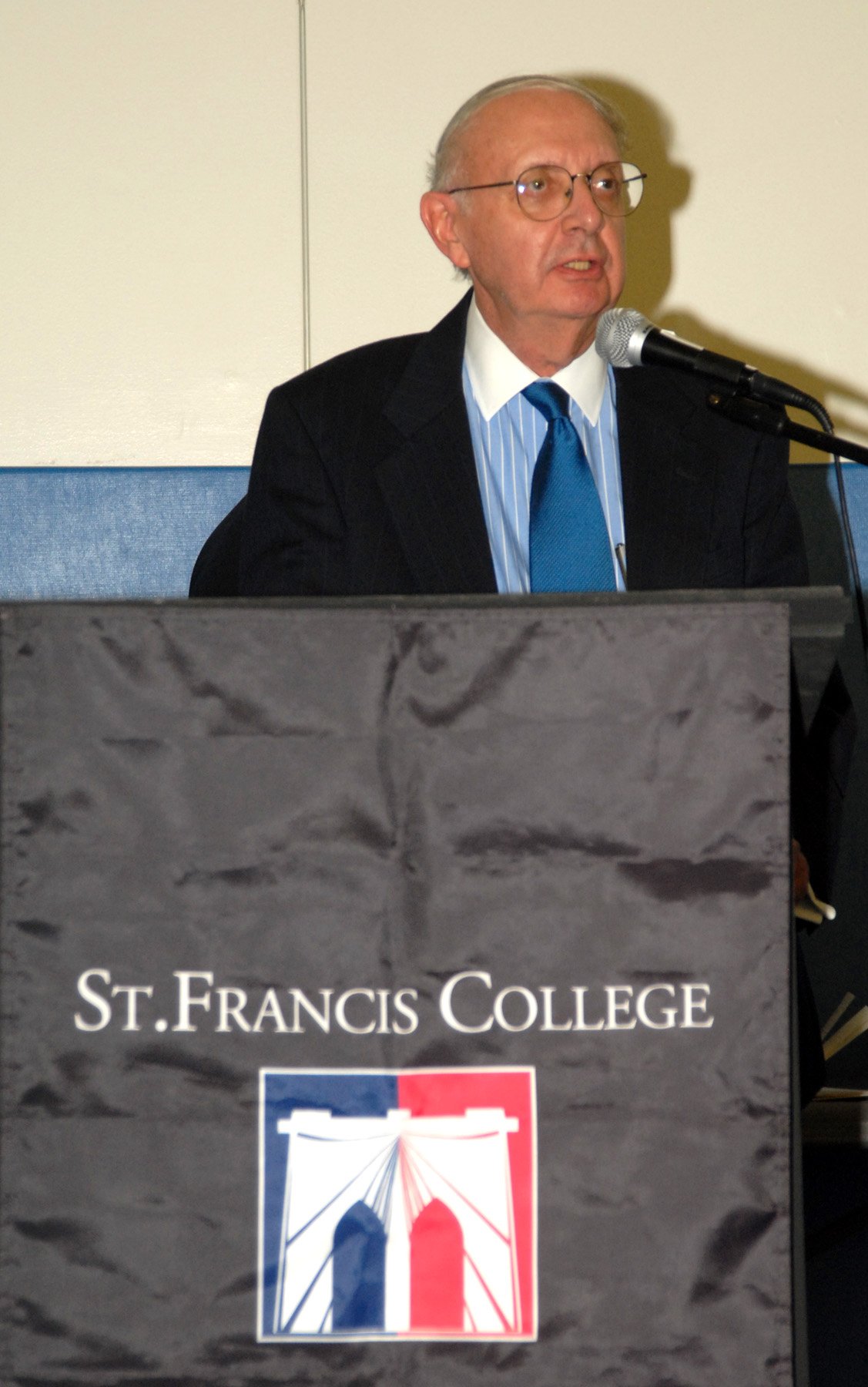 Dean Largo graduated from Cathedral College with a Bachelor's Degree in Philosophy, holds a Master's Degree in Theology from St. John's University and a Ph.D. in Religion from New York University. He has received the Franciscan Spirit Award and been inducted into the Duns Scotus Honors Society. Dean Largo is also a founding member of Theta Alpha Kappa, the national honor society for religious studies. He has written two books on theology and numerous articles and reviews.

Dean Largo has also taught at St. John's University, Iona College, SUNY Empire State College and the Deacon Preparation Program for the Roman Catholic Diocese of Brooklyn. He sits on the Advisory Committee for the Long Island College School of Nursing.

Edward Aquilone '60
Athletic Director Edward Aquilone will be saying goodbye to St. Francis College for the second time. The first was after his undergraduate studies where he was also a member of the 1955-56 Men's Basketball Team. That team was ranked as high as ninth in the nation and holds the school record for compiling an 18 game winning streak.

Aquilone also saw through the increase in the number of Division I athletic teams to 20, including the Nationally Ranked Men's Water Polo team and the new Women's Bowling team which features National Top Five Bowler Alexandra Stein.

Aquilone was inducted into the St. Francis College Athletic Hall of Fame in 1989.