The maintenance is scheduled to take place on the following days: June 21, June 22, July 11, July 13, August 1, August 3, August 16, and August 17. If you experience any problems accessing any of these applications during these dates, please understand the application may be down for migration. SFC IT will be sending out notifications when systems are back online. Thank you for your support and patience during this process.
Alumni
April 21, 2015

St.Francis College and BookCourt welcomed Master of Horror Stephen King for a roundtable discussion in the College’s Founders Hall on April 21, 2015. 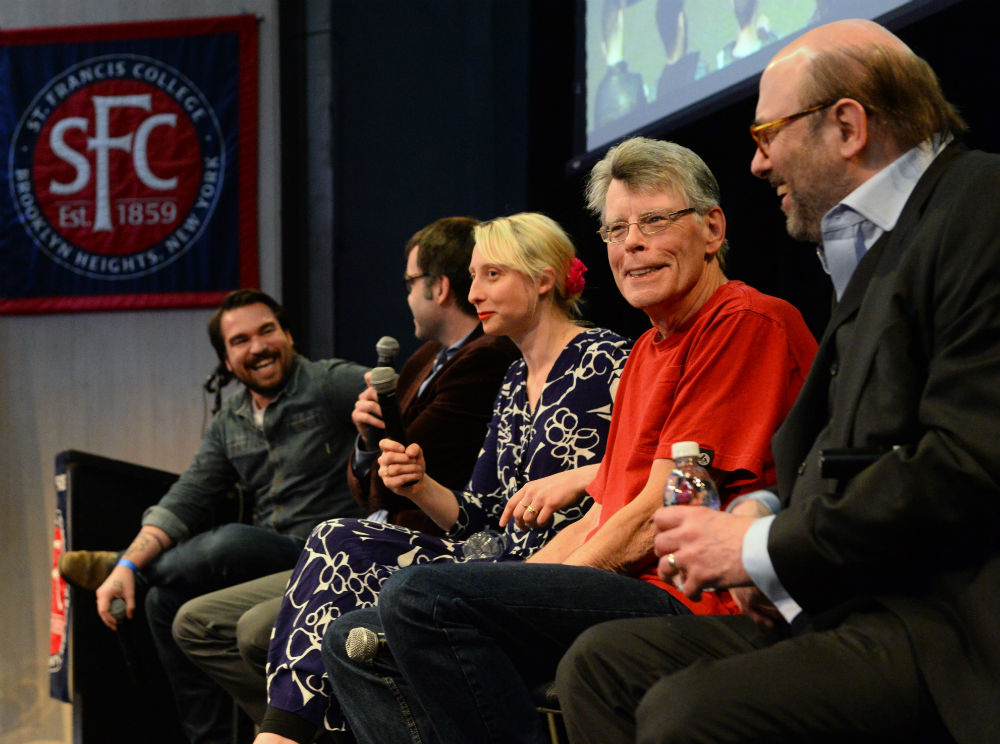 Joining the author was his son Owen King as well as Peter Straub and Peter’s daughter Emma Straub.


The event was co-sponsored by BookCourt (163 Court Street, Brooklyn).

About the Authors
Stephen King was born in Portland, Maine in 1947, the second son of Donald and Nellie Ruth Pillsbury King. He made his first professional short story sale in 1967 to Startling Mystery Stories. In the fall of 1973, he began teaching high school English classes at Hampden Academy, the public high school in Hampden, Maine. Writing in the evenings and on the weekends, he continued to produce short stories and to work on novels. In the spring of 1973, Doubleday & Co., accepted the novel Carrie for publication, providing him the means to leave teaching and write full-time. He has since published over 50 books and has become one of the world's most successful writers.

Stephen lives in Maine and Florida with his wife, novelist Tabitha King. They are regular contributors to a number of charities including many libraries and have been honored locally for their philanthropic activities.

Peter Straub is the author of seventeen novels, which have been translated into more than twenty languages. They include Ghost Story, Koko, Mr. X, In the Night Room, and two collaborations with Stephen King, The Talisman and Black House. He has written two volumes of poetry and two collections of short fiction, and he edited the Library of America's edition of H. P. Lovecraft's Tales and the forthcoming Library of America's 2-volume anthology, American Fantastic Tales. He has won the British Fantasy Award, eight Bram Stoker Awards, two International Horror Guild Awards, and three World Fantasy Awards. In 1998, he was named Grand Master at the World Horror Convention. In 2006, he was given the HWA's Life Achievement Award. In 2008, he was given the Barnes & Noble Writers for Writers Award by Poets & Writers. At the World Fantasy Convention in 2010, he was given the WFC's Life Achievement Award.

Owen King is the author of We’re All in This Together: A Novella and Stories, and co-editor (with John McNally) of the fiction anthology Who Can Save Us Now? His fiction has appeared in One Story and Prairie Schooner, among other publications. He has been nominated for a National Magazine Award and recognized in the Pen/O. Henry Prize Stories series. Double Feature, his first novel, was published by Scribner in 2013.

Emma Straub is from New York City. She is the author of the novels The Vacationers and Laura Lamont’s Life in Pictures, and the short story collection Other People We Married. Her fiction and nonfiction have been published in Vogue, New York Magazine, Tin House, The New York Times, Good Housekeeping, and the The Paris Review Daily. She is a staff writer for Rookie. Straub lives with her husband and son in Brooklyn.