The maintenance is scheduled to take place on the following days: June 21, June 22, July 11, July 13, August 1, August 3, August 16, and August 17. If you experience any problems accessing any of these applications during these dates, please understand the application may be down for migration. SFC IT will be sending out notifications when systems are back online. Thank you for your support and patience during this process.
Academics
February 1, 2018

St. Francis College students, faculty and friends had a chance to meet the Mets legend Ron Darling at an event to raise awareness for the Robert J. McGuire Scholarship Fund on February 1, 2018.

The Mets 1986 World Series champ learned about the McGuire Scholarship through his old boss, Fred Wilpon, owner of the Mets, who started the program and has been instrumental in raising more than $1.3 million to provide scholarships to students who otherwise would not be able to afford a quality, private college.

Darling's talk focused on Livin' the Dream - Failure, Triumph, Living and Giving Big Dreams. He said that while all his accomplishments on the baseball diamond were great, the best moment for his family was when he opened his acceptance letter to attend Yale.

More than 60 St. Francis College students are now benefitting from the McGuire Scholarship and Darling says he's happy to raise the profile of the program and help support the McGuire scholars in a number of ways.

Darling is currently fulfilling his post-career dream as a color commentator for national baseball coverage on TBS as well as for the Mets on both SNY and WPIX. In addition to his role as commentator, Darling is a national broadcaster for the MLB Network.

During his 13-year baseball career, Darling amassed a 136-116 won-loss record, with 13 shutouts. He threw 1,590 strikeouts and had a 3.87 ERA. As an all-time highlight Darling was picked for the All-Star team in 1985. Darling was considered to be one of the best fielding pitchers of the time, and won a Gold Glove Award in 1989.

About The Kenneth D. Daly - National Grid Lecture Series
Kenneth D. Daly '88 has been with National Grid for 30 years and is President of National Grid New York, which serves 4 million customers and provides electricity and natural gas to customers in New York State. A graduate of St. Francis College, Daly is currently a member of the College's Board of Trustees and has been an adjunct professor at the college since 1992. Mr. Daly has personally endowed two full scholarships to provide opportunities for needy students to attend the college and has mentored and hired over 100 graduates of the college.

The goal of the lecture series is two‐fold; to bring experts from a wide range of backgrounds, expertise, and accomplishment to St Francis College where they can share their perspective and outlook on a host of critical issues, and to further expand student's educational experiences outside the classroom. The goal is for the lecture series to foster student interest and engagement as responsible citizens. 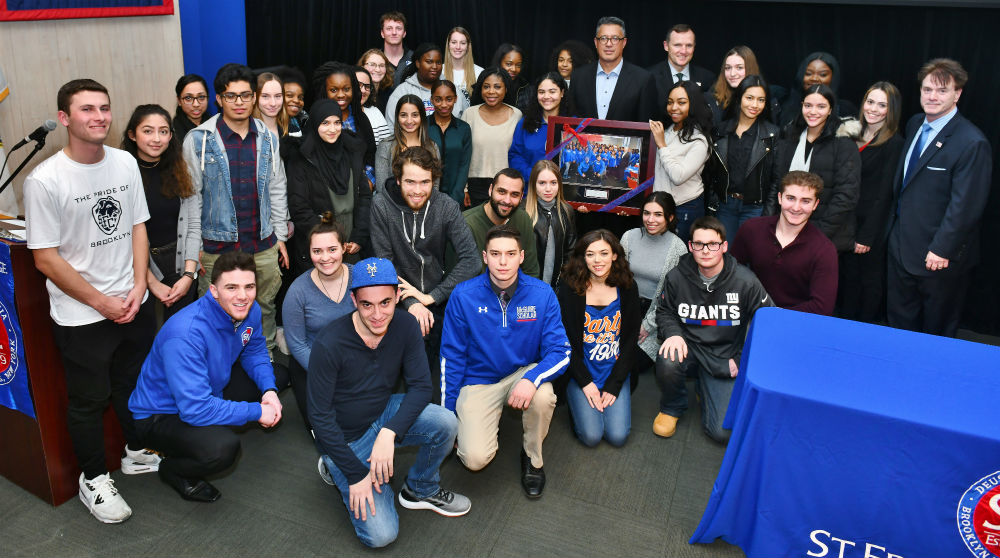 Fred Wilpon, Ron Darling, Ken Daly and other lead benefactors of the Robert J. McGuire Scholarship have all been All-Stars in this life-changing endeavor, helping us move closer to the current $1.2 million Wilpon challenge grant. There is no cost to attend the event - but all attendees will be encouraged to support the McGuire Scholarship - Wilpon Challenge and become a partner in helping others live their dreams.