The maintenance is scheduled to take place on the following days: June 21, June 22, July 11, July 13, August 1, August 3, August 16, and August 17. If you experience any problems accessing any of these applications during these dates, please understand the application may be down for migration. SFC IT will be sending out notifications when systems are back online. Thank you for your support and patience during this process.
Academics
April 22, 2010

St. Francis College's Largest Fundraiser of the Year In Memory of College Icon

For more than 35 years, Brother George Larkin, O.S.F. '60 helped recruit and guide thousands of students through their time at St. Francis College. To honor his memory and the influence he had on the St. Francis College Community, the College raised more than $400,000 through donations, ticket sales, sponsorships of the event and a silent auction at the 49th Annual Charter Award Dinner on Thursday, April 22 at the New York Marriott.

After a welcome from St. Francis Board of Trustees President John F. Tully '67, the night started off on a high note with a rousing rendition of the National Anthem by student Pleshette Carr '11. An invocation from Superior General of the Franciscan Brothers of Brooklyn Brother William Boslet, O.S.F. '70 followed along with a proclamation presented to the family of Brother George by State Senator Marty Golden and City Councilman Eric Ulrich '07, a St. Francis graduate. College President Brendan J. Dugan '68 then emceed the second part of the night, leading the crowd through a tear evoking tribute video about Brother George and testimonials from student Jordhan Kerridge '11 and College Chancellor Frank J. Macchiarola '62. (Watch the event) 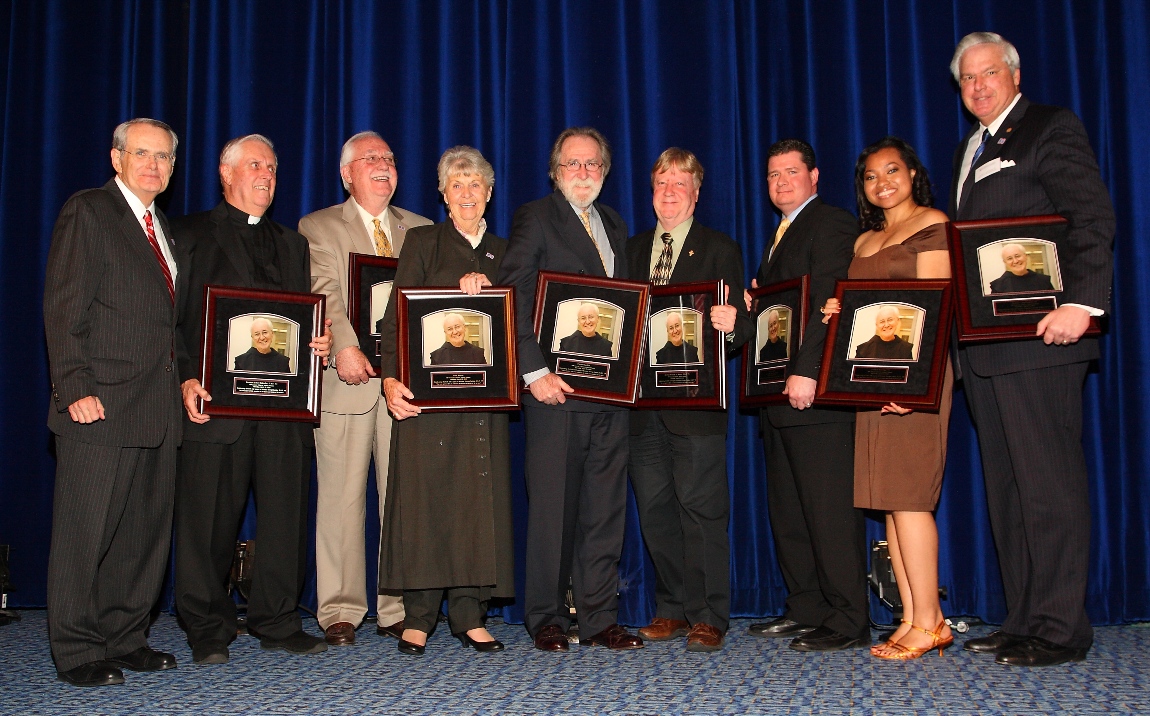 "Brother George Larkin, a man whom many of us in the room have had the great privilege to know, impacted and changed many lives including his immediate family, his family of Franciscan Brothers, his family of friends, and his St. Francis College family," said President Dugan. "By honoring him at the Award Dinner, we keep his spirit alive and continue to make a difference in people's lives." (Read reflections on Bro. George)

After an experience with Brother George disappearing to parts unknown through a back entrance of the Admissions Office where she worked, Jordhan Kerridge came to this realization, "Brother George is Batman." She added that he was, "a watchful guardian, a man who uplifted our spirits, and someone who saved us students from the troubles of college... His kindness, thoughtfulness, desire to serve and help anyone by all means necessary; it made you want to do the same."

Bro. George graduated from St. Francis College in 1960, returning in 1971 to spend more than 35 years in the admissions office, personally recruiting tens of thousands of young men and women who went on to attend the College. He was the welcoming face that students saw on their first day of College each semester and the last before they walked across the stage to pick up their diploma at graduation. He kept to that tradition until just a few days before he fell ill, meeting members of the 2009 incoming freshman class as they took their placement tests in early August. (Watch two videos of Bro. George)

"We should always build bridges not walls; George lived by those understandings" said Chancellor Macchiarola. "George saw the face of God in everyone he met. Every individual quality was reduced to a common human one and that was enough for Brother George to work his magic for all his brothers and sisters, all children of God."

"This year's Charter Award Dinner is a fitting tribute to Brother George for his long service to St. Francis College," said Brother Boslet. "Always visible on campus, always accessible to students and always with a story of pride about the people he'd watched grow and learn; Brother George's boundless energy for helping others and his commitment to education resulted in changing countless lives for the better."

Among the silent auction items purchased were a portrait of Brother George that was bought and gifted to his best friend Brother Robert Schaefer, O.S.F., a guided tour of the Metropolitan Museum led by Dr. Francis Greene, Chairman of the St. Francis Foreign Languages, Fine Arts, and International Cultural Studies Department and use of a luxury suite for a Brooklyn Cyclones game.

Created by the Board of Trustees in 1962, the Charter Award Dinner commemorates the grant of a charter by the New York State legislature that empowered St. Francis College to confer diplomas, honors and degrees. For 49 years, the Charter Award Dinner has been the College's premier fundraising event. Proceeds from the Dinner support the College's mission of providing an affordable, superior liberal arts education and scholarship aid to more than 2,300 primarily first-generation college students.

For more information, please call the Office of Development and Alumni Affairs at (718) 489-5361 or email [email protected].