The maintenance is scheduled to take place on the following days: June 21, June 22, July 11, July 13, August 1, August 3, August 16, and August 17. If you experience any problems accessing any of these applications during these dates, please understand the application may be down for migration. SFC IT will be sending out notifications when systems are back online. Thank you for your support and patience during this process.
Academics
March 29, 2011

New York and the Crisis of the States

The New York State budget is passed but the debate over what’s in the budget and how it will affect people across the state and the future economy remains a pressing issue. A lively discussion on those positions took place March 29 at St. Francis College between E.J. McMahon of the Manhattan Institute’s Empire Center and former Westchester Assemblyman Richard Brodsky. Fred Siegel, visiting professor at St. Francis moderated the panel. (Watch New York and the Crisis of the States)

Sponsored by St. Francis College and the Manhattan Institute, this forum continues the series of special events held at the College, which ask and answer tough, contemporary questions that focus on the major social and economic debates of the day. 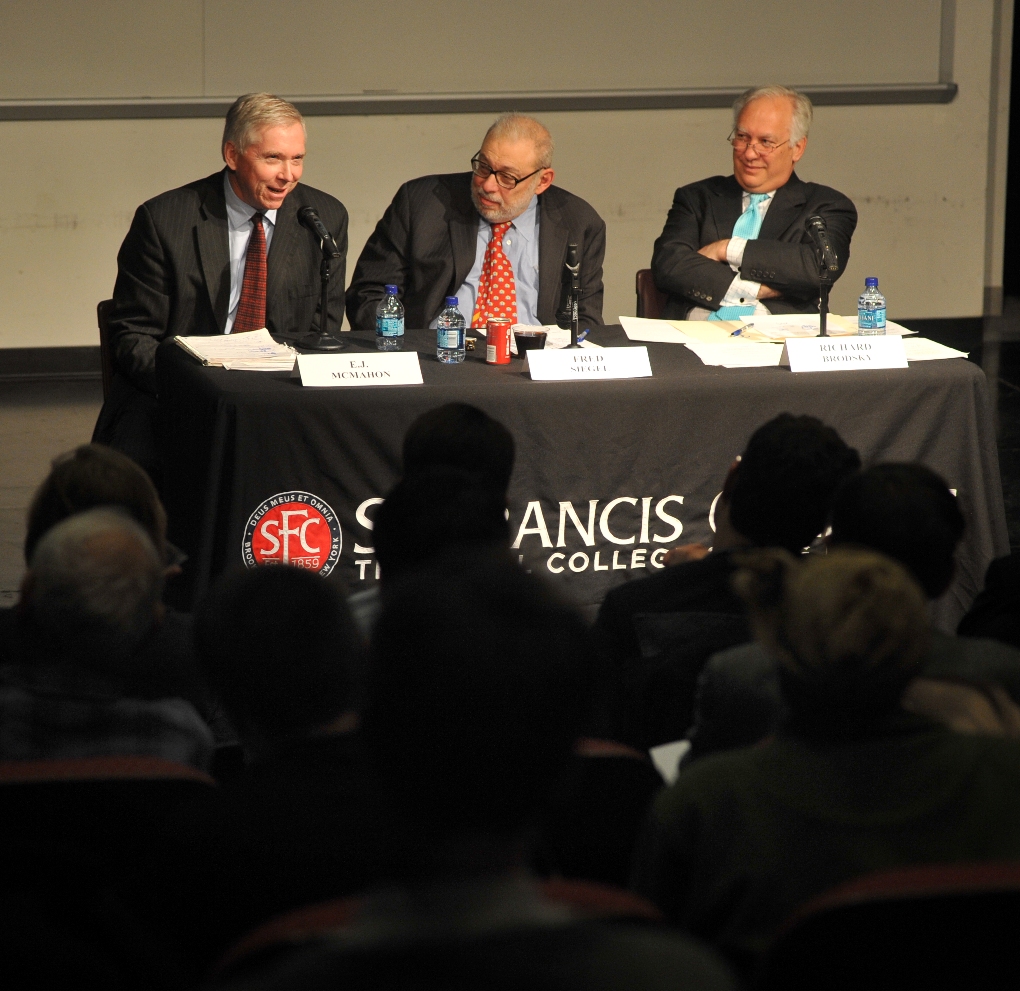 About the panelists:
E.J. McMahon
Senior Fellow at the Empire Center for New York State Policy and a senior fellow at the Manhattan Institute, McMahon writes on regional, state and local issues, recommending policy changes and reforms to increase economic growth. His recent work includes studies focused on New York's unsustainable public pension and retiree health care costs, the out-migration of New York residents to other states, and a "blueprint" for cutting and restructuring New York's deficit-ridden state budget. His articles have appeared in The Wall Street Journal, The New York Times, Barron's and New York’s daily tabloids, among others.

Richard Brodsky
Assemblyman Richard Brodsky (D) from Westchester was first elected to public office in 1975 and served in the New York State Assembly from 1982 to 2010. His work as a legislator focused on government and social reform and exposing corruption. Among his many achievements, he worked to pass a law to bring more transparency to state authorities, investigated Con Edison for its role in the Queens blackout in 2006 and fought against congestion pricing for driving into Manhattan. In 2010, Brodsky ran unsuccessfully for Attorney General of New York.

Fred Siegel
St. Francis College Visiting Professor Fred Siegel is a senior fellow at the Manhattan Institute and contributing editor to its long running magazine, City Journal. He is a prolific writer of articles, editorials and two books, The Prince of the City: Giuliani, New York and the Genius of American Life. Siegel has organized several joint forums and debates hosted by St. Francis College and the Manhattan Institute, including Journalism in the Age of the Internet, Independent Voices of the Middle East and the most recent, Is the New York Times Good for Democracy?