The maintenance is scheduled to take place on the following days: June 21, June 22, July 11, July 13, August 1, August 3, August 16, and August 17. If you experience any problems accessing any of these applications during these dates, please understand the application may be down for migration. SFC IT will be sending out notifications when systems are back online. Thank you for your support and patience during this process.
Academics
January 24, 2017

St. Francis College hosted painter and Holocaust survivor Fred Terna on January 24, 2017 to talk about his life, his work, and his show held in January at the College's Callahan Center, Processing Chaos, Recurring Echoes.

(Watch Fred Terna on His Life and Art)

Terna said that while he's painted other subjects, the Holocaust dominates his work because, "inside of me is a crazy bass player playing a crazy melody and what I've learned is to play a fiddle above it so that there should be some harmony to my life. Painting is my fiddle."

As a Holocaust survivor, Terna has maintained an active painting practice for over 70 years, using the canvas as a means to address the psychological space of trauma and its hairy edges. Often incorporating the charged symbols of chimneys and ash to abstract effect, Terna also mixes untraditional media with folded canvas, sand, and pebbles in order to enliven the tactile senses.

For Processing Chaos, Recurring Echoes, Terna presents a selection of work from the 1970s to the present. The earlier work on view, made during a time when survivors were encouraged to speak more openly about their experiences in the Holocaust, are characterized by an inner anxiety resulting in myriad styles including large-scale canvases rendered in dark palettes, and others whose sweeping gestures suggest exaltation. His recent work is smaller in scale, and focuses on subjects of evil and liberation, manifested in a series of flames, arches, and portals that denote transition from one kind of place to another.

Bearing witness is vital to Terna. As such, his work serves as a record of his own survival and as a daily reminder of the Holocaust and its proximity. The title of the exhibition addresses Terna's attempt to work through the trauma of the Holocaust, while also accepting its omnipresence. As he states, "the Holocaust is like a constant crazy bass, but I have learned to play my fiddle above it all." 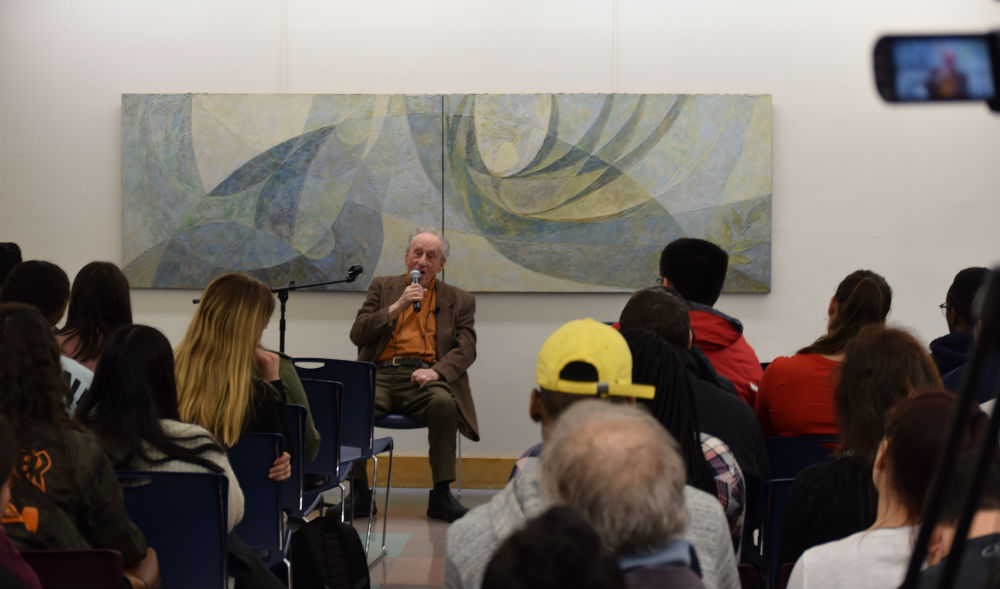 Fred Terna lives and works in Brooklyn, New York. He was born in Vienna and lived in Prague from 1926-1940. From 1941-1945, Terna was an inmate in German concentration camps, among them Theresienstadt, Auschwitz, and Dachau. He moved to Paris in 1946 and studied at the Academie de la Grande Chaumiere and the Academie Julien, where he was inspired by the work of the Cubists and post‑Impressionists. After eventually settling in New York in 1952, Terna elaborated on the prevailing modes of abstract expressionism with a personal style that infused textural elements into his compositions.

Terna has lectured extensively and exhibited his work in several solo and group shows. His work is included in a variety of collections including the Smithsonian Institution in Washington, D.C., The Albertina Collection in Vienna, The Ghetto Fighters Museum, and the Yad Vashem Museum in Israel. 321 Gallery (Brooklyn, NY) presented his work at the NADA New York art fair in May, 2016.