The maintenance is scheduled to take place on the following days: June 21, June 22, July 11, July 13, August 1, August 3, August 16, and August 17. If you experience any problems accessing any of these applications during these dates, please understand the application may be down for migration. SFC IT will be sending out notifications when systems are back online. Thank you for your support and patience during this process.
Academics
March 12, 2009

A theater full of St. Francis College Accounting, Business and Technology students had the opportunity to learn about the current economic climate from four prominent College alumni who all have an inside, up-close look at the finance industry on Thursday, March 12 in the College's Maroney Forum for Arts, Culture & Education. St. Francis President Brendan J. Dugan '68, former Chairman & CEO of the Metro NY/NJ Division of Sovereign Bancorp moderated the panel which included; Edward Travaglianti '70 President of TD Bank Long Island, Lawrence A. Marsiello '72, Managing Member and Co-Founder of Wriston Capital Management and Vincent DeGiaimo CPA '72, the COO of Muirfield Capital Management.

President Dugan began the discussion with a historical look at the factors that led to the current crisis, pointing to the repeal of the Glass-Steagall Act in 1999. Mr. Dugan noted that while this allowed for financial institutions to expand into new areas of money management and investing, the regulators who watched over the industry were slow to evolve and adapt their monitoring of all the new opportunities. With this shift, President Dugan said, many companies then moved from earning their profits from interest on investments to collecting fees on transactions. 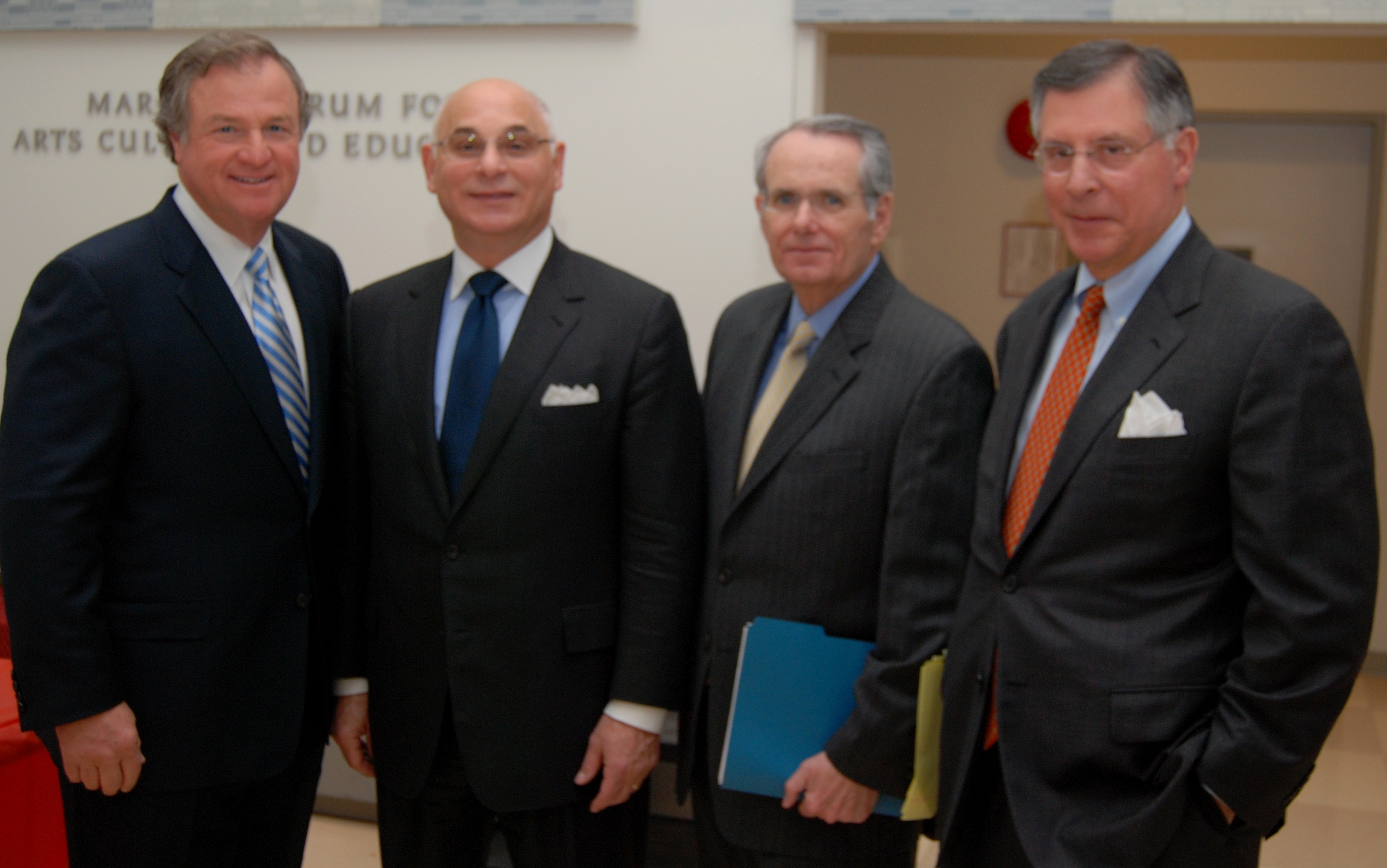 Mr. Travaglianti talked about the lessons to be learned from this current cycle, saying that people will now concentrate more on the fundamentals of basic investing. He said that while debt is not intrinsically bad, we have learned that too much debt leads to instability and that bigger is not always better. "We've heard that some companies were too big to fail but maybe they were too big to manage," said Travaglianti. He said that we will now see more opportunities on a smaller, more local scale in a nimble entrepreneurial world.

Mr. Marsiello said that the federal government stimulus was necessary and given time will, in the short run, prove effective. He urged that the government can only do so much and that, "long term recovery relies upon the private sector replacing the government as the engine of growth." All in all, Marsiello predicted that while we will still see volatility and more defaults in the short run, the pieces are falling into place for a powerful recovery. He said much needed capital is funneling back into the banking system, excess inventories are being liquidated and housing prices are falling to a level where many will be able to purchase homes.

Mr. DeGiaimo based his comments as much on psychology and economics. He pointed that that we have experienced countless cycles throughout history and that while sometimes lessons are learned, often times, those same lessons are forgotten and similar mistakes are made over and over again. He rattled off a series of crises from the last decade; the 90's Asian crisis, the Russian debt default, the Long Term Capital Management meltdown, the dot com bust, 9/11 and Enron as examples of the repeating bubble and burst cycle. Mr. DeGiaimo put a large part of the blame on the Federal Reserve which reacted to each of these crises by pouring large sums of money into the system. He said this abundance of cheap money encouraged people to take excessive risks. What he said was unique about the current crisis is that, "it is the culmination of a whole series of downward cycles, making the situation difficult to manage." DeGiaimo added that we will come out of this and there are many opportunities for wise investors right now, but cautioned that there will be more bubbles and more future crises.

One concept that the entire panel agreed on was that a restoring of investor confidence will be crucial to seeing a full financial recovery.