Skip to main content
Upload Proof of Vaccination
Reminder: All students, faculty, and staff must be fully vaccinated against COVID-19 and upload proof as a condition of accessing College buildings (including the residence hall) during the 2021-2022 academic year.
Academics
January 20, 2017

As Donald Trump was sworn in to become the 45th President of the United States, more than 100 St. Francis College students and faculty packed Lecture Hall 3213 for Teach-In .

"The teach-in provided an opportunity for concerned faculty and students to engage in thoughtful dialogue about what the Trump Presidency will mean for them, their families, their communities, and their country," said Management Professor John Dilyard, who helped organize the teach-in.

After an election that divided the country, St. Francis professors thought it was important to bring everyone together to find common ground and work through the issues that were discussed during the presidential campaign.

Supporters of both candidates packed the lecture hall and spoke openly, honestly, and calmly about how the election affected them and their thoughts on the next four years.

The Women's Center, moderated by History Professor Sara Haviland and English Professor Wendy Galgan, sponsored a bus to the Women's March on Washington, while the

Institute for Peace and Justice brought a group of students to the Women's March on New York City. 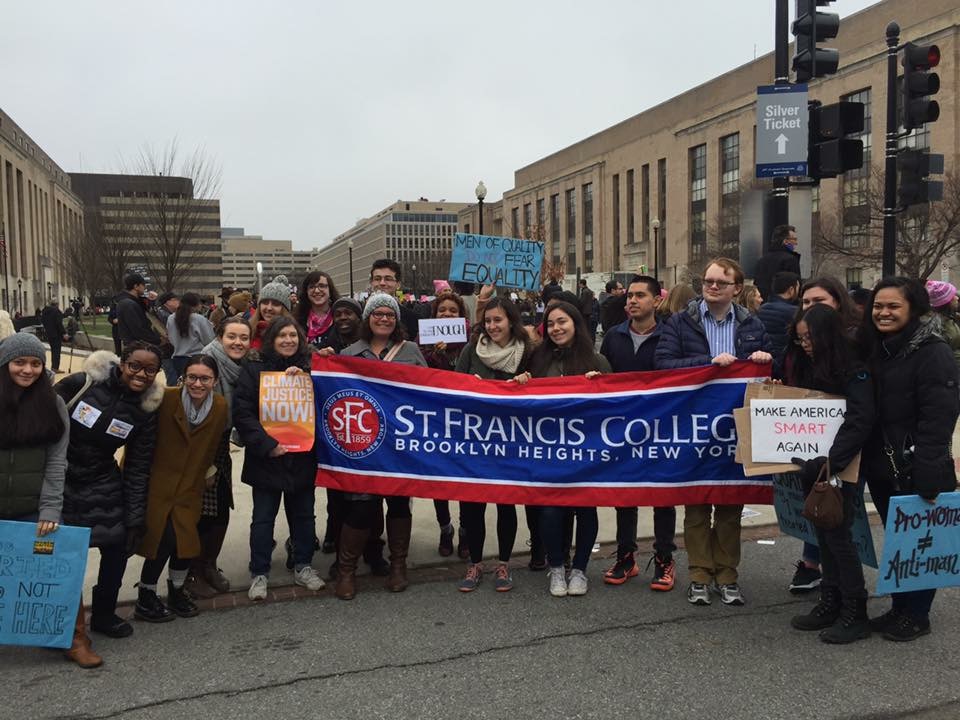 In addition to taking part in the Women's March on Washington, many of the students donated their Washington D.C. Metro SmartCards to an organization that distributes them to families in need.

"We think it's important to stand united and exercise our freedom of speech in these uncertain times," said English Professor Ian Maloney who helped organize the New York contingent of students. "Much of the rhetoric coming out of this new administration is at odds with the mission of the Institute for Peace and Justice and we want to send a message in support of peaceful civil discourse and social equality."