The maintenance is scheduled to take place on the following days: June 21, June 22, July 11, July 13, August 1, August 3, August 16, and August 17. If you experience any problems accessing any of these applications during these dates, please understand the application may be down for migration. SFC IT will be sending out notifications when systems are back online. Thank you for your support and patience during this process.
Academics
March 9, 2010

St. Francis College Professor of English Gregory F. Tague is pleased to announce the publication of his second book of 2010 and fourth scholarly book overall, Origins of English Dramatic Modernism, 1870–1914 (Academica Press), which focuses on the development of artistic, stylistic, and intellectual English dramas.

Professor Tague who contributed an essay to the book, co-edited the tome with Daniel Meyer-Dinkgräfe, Professor of Drama at the University of Lincoln, U.K. The book mixes a combination of works on well-known and some lesser-known writers or actor-managers to offer the big picture on this early period of modernism in England. Tague and Dinkgräfe’s collection includes a broad mix of attention to the history of ideas, as well as literary and cultural developments of the era. 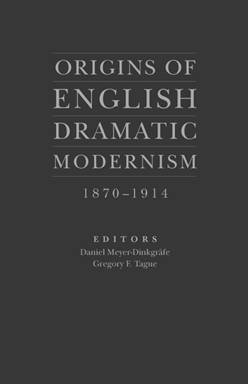 Among the fifteen new essays are works by modernist scholars: Kelly Jones and Ben Poore who look at popular theatrical traditions like freak shows, the music hall and the circus and their impact upon avant-garde theater; Timothy Carlos Matos and Patricia D. Denison write separate essays about Arthur Wing Pinero, a noted actor-playwright and director; and Jennifer Plastow who examines the role of Frida Strindberg, an impresario who tried to make herself the nexus of a creative and theatrical movement in the pre World War I years.

Each essay is fully indexed, including a comprehensive bibliography and features illustrations of dramatic performances, old and new. The work, which serves as a companion to Tague’s Origins of English Literary Modernism, 1870-1914 (2009), is a vital contribution to the study of the artistic shifts and cultural changes that bred the modernist movement. These two books (over 800 pages combined) on literary and dramatic Modernism bring together 36 different modernist scholars (in 36 chapters) addressing many pressing concerns, themes, ideas, and trends in this growing field of study.

Professor Tague’s essay in Origins makes an argument to include D.H. Lawrence in the pantheon of dramatists. His other research is primarily reader-response ethical criticism focused on the English novel and the history of ideas. Tague’s other books include: Ethos and Behavior: The English Novel from Jane Austen to Henry James (2008); and, Character and Consciousness: George Eliot, Thomas Hardy, E.M. Forster, D.H. Lawrence (2005). Professor Tague anticipates working on a book concerning Eighteenth-century novelists and thought (drawing, in large part, from his work in preparing academic editions of Jane Austen’s Sense and Sensibility and Pride and Prejudice).

Professor Tague will also be hosting a reading from his other 2010 publication, Pain and Memory: Reflections on the Strength of the Human Spirit in Suffering (Editions Bibliotekos), on April 22 at 4:00pm in the St. Francis College Maroney Forum for Arts, Culture & Education.