The maintenance is scheduled to take place on the following days: June 21, June 22, July 11, July 13, August 1, August 3, August 16, and August 17. If you experience any problems accessing any of these applications during these dates, please understand the application may be down for migration. SFC IT will be sending out notifications when systems are back online. Thank you for your support and patience during this process.
Academics
October 25, 2016

Even with a Nobel Peace Prize and many awards and honors for advocating for peace and equality Leymah Gbowee admits that she is still very much a work in progress.

Speaking at the 5th Annual Dr. Francis J. Greene Honors Lecture at St. Francis College on October 25, 2016, Gbowee urged people to lay down their misconceptions about others and realize that at the core of most struggles, people are fighting for the same thing; basic human rights.

"In order for you to begin a sustained protest you have to work on the inner. Because once you've dealt with all those things you can't stand then you are on your way to deal with the injustices of our world." 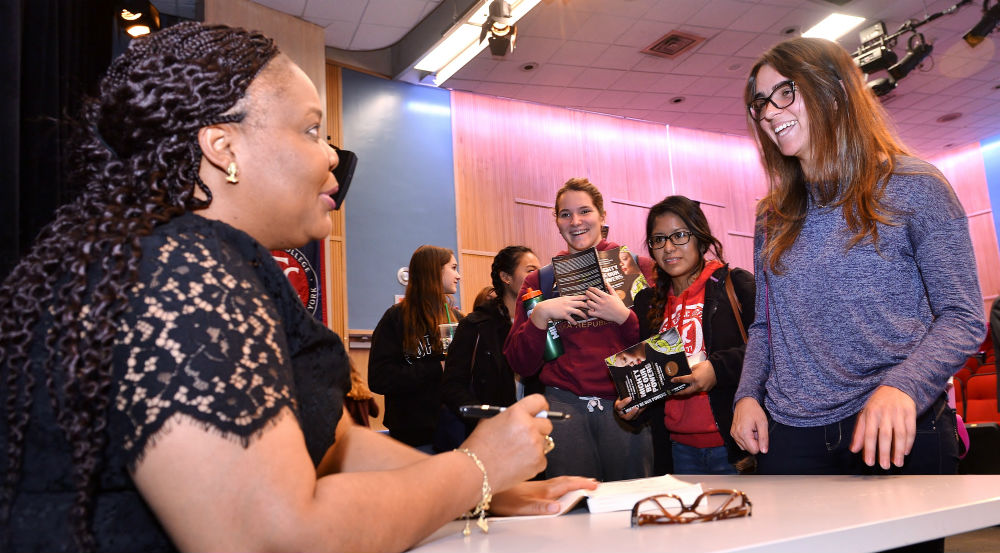 Gbowee talked about confronting her own prejudices. She shared a story about a training session where she voiced her past conceptions about homosexuals. "Everybody in that room just sat and looked at me." Then an Anglican priest spoke to her, "'Leymah, you have a lot of activism in you but let me ask you a question... if your two boys came to you and said they were this way what would you do?'"

The priest told Gbowee that her son had gone to seminary but he killed himself because he was ashamed of disappointing his parents by revealing that he was gay.

"How do you say 'I care for Black Lives Matter but I don't care for gay and LGBT people.'?" Gbowee said.

She said until people fighting for justice for one group of people trust others fighting for another group, there won't be the transformational change that either wants.

"The reason why we have all of the knowledge and all of the activism and all of the protest happening but we're not seeing real change is because we are doing all of this in our stereotypical attitude of the other."

Leymah Gbowee won the Nobel Peace Prize for her role in ending the civil war in Liberia. She brought together Christian and Muslim woman in a nonviolent protest movement that including a sex strike that played a crucial part in forcing the two sides to negotiate and end the war.

The Honors Lecture was organized by Professor John Dilyard, Director of the Honors Program. It is named for Dr. Francis Greene, who taught at St. Francis College for more than 30 years before retiring as a full-time faculty member. Professor Greene founded the Honors Program and was the long-time moderator of the Duns Scotus Honor Society and chair of the Department of Foreign Languages, Fine Arts, and International Cultural Studies, where he still teaches. He was also Co-Director of the College's Study Abroad program.

2011 Nobel Peace Laureate Leymah Gbowee is a Liberian peace activist, trained social worker and women's rights advocate. She is founder and current President of the Gbowee Peace Foundation Africa. She was the founding head of the Liberian Reconciliation Initiative, and was the co-Founder and former Executive Director of Women Peace and Security Network Africa (WIPSEN-A). She is also a founding member and former Liberia Coordinator of Women in Peacebuilding Network/West Africa Network for Peacebuilding (WIPNET/WANEP). Her life story is chronicled in her memoir, Mighty Be Our Powers, and in the award-winning documentary, Pray the Devil Back to Hell.