Skip to main content
Upload Proof of Vaccination
Reminder: All students, faculty, and staff must be fully vaccinated against COVID-19 and upload proof as a condition of accessing College buildings (including the residence hall) during the 2021-2022 academic year.
In the Spotlight
June 10, 2019 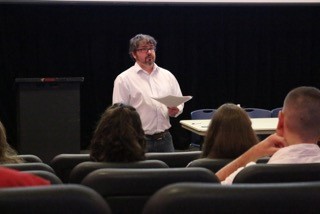 Walt Whitman scholars and enthusiasts from around the globe gathered at St. Francis College on May 27th to kick off International Whitman Week, an annual series of events commemorating the birth of the renowned 19th century poet who called Brooklyn home.

Dr. Ian Maloney, St. Francis College Professor of English, was one of three board members of the Walt Whitman Initiative, a collective of academics and others interested in Whitman's life and work, to address students and faculty from India, China, Germany, Scotland, England, Australia, Italy, Canada and the United States at a seminar held in SFC's Founders Hall.

Dr. Maloney spoke about work the Initiative is doing to memorialize Whitman's legacy as one of Brooklyn's most important literary residents.

"I got involved with the Walt Whitman Initiative when it first started about a year and half ago, because it was confounding to me that there's not more public acknowledgment in Brooklyn about all that Whitman achieved while living here," Dr. Maloney said of the poet, who resided in the borough for 28 years.

Among the projects the Initiative is spearheading is a sculpture installation planned for Brooklyn Heights paying tribute to the publication location of Whitman's seminal poetry collection, Leaves of Grass. It is also working to preserve the home at 99 Ryerson Street, the Clinton Hill address where Whitman lived when he completed that American epic, as well as his last standing Brooklyn home.

This year New York City played host to International Whitman Week, which occurs the last week of May – at international locations -- to coincide with the poet's May 31st birthday. It is organized by The Transatlantic Walt Whitman Association and features a schedule of Whitman-themed lectures, panel discussions, walking tours and artistic presentations that attract devotees from the around the world.

The Walt Whitman Initiative – which is helmed by its founder Dr. Karen Karbiener of New York University -- was one of several organizations that put on events during International Whitman Week from May 27th to June 1st. This year is particularly important to Whitman aficionados because it is the 200th anniversary of his birth.