Today, St. Francis College (SFC) announced the launch of its “Driven by Dreams, Defined by Success” multimedia campaign, welcoming New Yorkers to be a part of the growing SFC community ahead of its new Downtown Brooklyn campus opening in the fall.

Running between June and October 2022, the campaign celebrates a diverse group of student and alumni voices from the SFC community who represent the academic and professional success found at St. Francis College for more than 160 years.

“St. Francis College is about to embark on a bold new chapter that will allow us to continue offering a first-rate, affordable education,” said Miguel Martinez-Saenz, President of St. Francis College. “This campaign is a message to all New Yorkers that St. Francis College is firmly committed to Brooklyn and New York City, and that we want them to be a part of our ongoing story. Our students come through our doors as dreamers and go on to become leaders in their fields. We are excited to welcome the next generation of big thinkers through the doors of our new state-of-the-art campus in September.”

The new branding and campaign will be prominently visible near the new Downtown Brooklyn campus, with banners lining the streets throughout the neighborhood. The faces of the people who make up the St. Francis College community and images of the new campus also will be visible to pedestrians and commuters in some of New York City’s most diverse neighborhoods in Brooklyn and Queens.

The move is a critical component of SFC Forward, the College’s ongoing initiative to deepen its commitment to meeting the needs of its growing student body while continuing to be the diverse, equitable and inclusive community it is known for. As part of SFC Forward, the College has introduced a robust slate of new undergraduate and graduate degrees to better support students seeking to confront today’s most pressing social and economic issues.

Diversity, equity and inclusion are a cornerstone of SFC’s Franciscan mission and SFC Forward. The College recently launched its first-ever multi-year DEI initiative, which evaluates existing practices and policies and establishes clear guidelines for inclusive approaches to outreach and engagement with the SFC community.

“As St. Francis College settles into our Downtown Brooklyn home, we have a unique opportunity to look towards the future and celebrate the legacy of those who helped SFC arrive at this momentous time,” said Monique Pryor, Chief Engagement and External Affairs Officer at St. Francis College. “Our updated look and feel is more than just superficial — it represents our refocused priority of preparing our students to tackle the challenges of today’s society while honoring our Franciscan values of service and generosity.”

Amid this exciting moment of change for St. Francis College, SFC debuted a refreshed logo and brand reflective of its latest chapter. SFC’s new look and feel presents an identity that, much like the new campus, is modern and forward-looking while paying homage to the institution's Franciscan values and history.

In partnership with Generation, a leading identity design firm, the administration met with various groups and individuals from the SFC community to collect their feedback, which played a crucial role in the final look of the new branding.

“From the moment we began working with the College, we identified the challenge of capturing its impressive and palpable momentum while honoring its Franciscan, Catholic mission,” said Tom Sternal of the Brooklyn-based branding firm. The SFC logo’s “F,” its centerpiece, was modified with an extended crossbar as a reference to the cross. The upper cap of the superscript “T” has been flared as a reference to the tau cross of the Franciscan brotherhood. The wordmark features custom-designed lettering based on the typeface Bebas Neue, which is reminiscent of the College’s historic crest.

“We delved into historic documents and worked hard to develop consensus with dozens of faculty, staff, students, alumni/ae, volunteers and friends of the College. We are proud to be part of this exciting expression of St. Francis’s history and, especially, its future.” 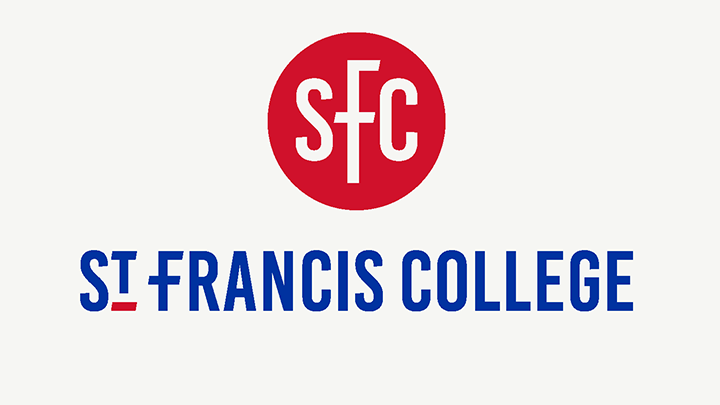 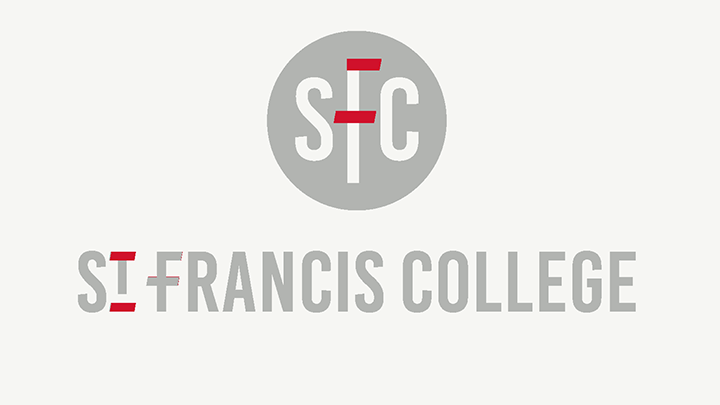 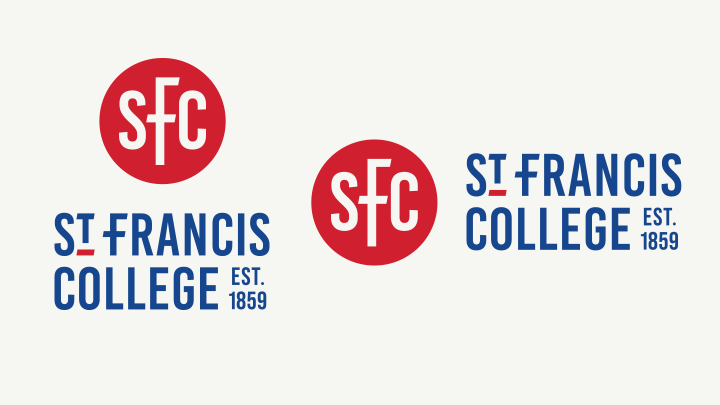