The maintenance is scheduled to take place on the following days: June 21, June 22, July 11, July 13, August 1, August 3, August 16, and August 17. If you experience any problems accessing any of these applications during these dates, please understand the application may be down for migration. SFC IT will be sending out notifications when systems are back online. Thank you for your support and patience during this process.
Academics
March 1, 2010

St. Francis College alumnae and Executive Director of the Child Abuse Prevention Program (CAPP) Marion D. White ’78 was honored with the Alumni Hall of Distinction Award for her contributions to New York State’s economy by the Commission on Independent Colleges and Universities (CICU) on Monday, March 1 at the New York State Capital in Albany.

“Family, education and friends are three factors that contribute to how a person connects with the world. I was fortunate to have all three,” said Executive Director White. “The preparation and confidence I gained at St. Francis from my caring professors and the supportive community helped in the creation of the Child Abuse Prevention Program in 1986. When starting CAPP, we reached out to many friends and colleagues from St. Francis for their advice, network and support and right now we have four members of our Board of Directors from St. Francis!” 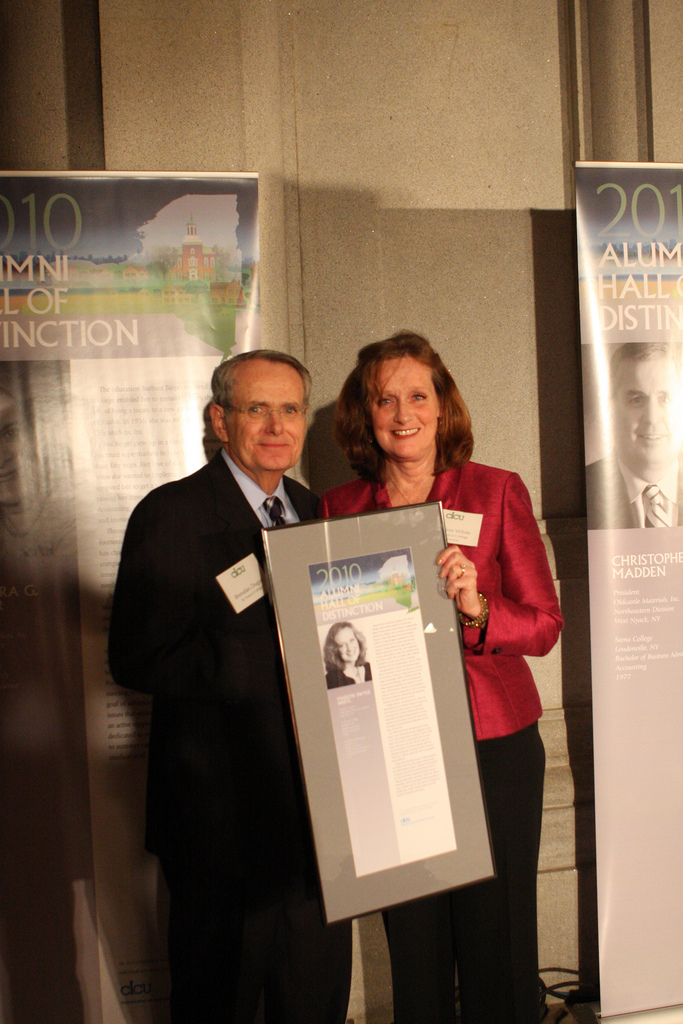 White was among twenty-three graduates of independent colleges and universities throughout New York who were honored. The honorees include entrepreneurs, family business owners, not-for-profit directors and industry leaders that highlight the many positive connections between higher education and economic development.

Ms. White is the Founder and Executive Director of CAPP, which works to prevent child abuse and the many negative long term effects of abuse. She was appointed by the Governor to the New York State Citizen's Review Panel for Child Protective Services; is currently serving on the Manhattan Abuse Task Force, the New York City Network on Child Abuse & Neglect and is a member of Prevent Child Abuse New York.

“Preventing the abuse of children, giving children the opportunity to end abuse that may already be happening in their home is the most important right we can provide to children,” said Ms. White. “Abuse lingers long after the physical pain or sexual abuse ends. Giving children the opportunity to "be children" without the worry, fear and complexities of abuse allows them to enjoy their childhood and grow into an adult who can embrace life, positively contribute to society, and provide a nurturing environment for the next generation.”

CICU created the Alumni Hall of Distinction in 2000 to salute New York’s Independent Sector graduates who have made extraordinary contributions to the state through their careers and community involvement. The awards ceremony is one part of CICU’s 54th Annual Meeting for college and university presidents. A gallery of honoree profiles will be on display during the event, and an exhibit will be on display in the Legislative Office Building from March 15-19, 2010.

“I would also like to recognize the women who walked before me,” added Mrs. White. “It was their efforts that opened the doors that I so easily walked through and allowed me to access the opportunities of education and the career of my choosing.”

Beyond the returns that Independent Sector alumni bring to New York State, colleges and universities are significant employers in their own right. Collectively, private, not-for-profit colleges and universities contribute $47.5B to the State’s economy annually, directly employing 180,000 individuals. According to the latest economic data, private education, along with health care, are the only two sectors of the state’s economy currently creating jobs.

The Commission on Independent Colleges and Universities (CICU) represents the chief executives of New York's 100+ independent (private, not-for-profit) colleges and universities on issues of public policy. Member colleges compose the largest private sector of higher education in the world and confer most of the bachelor's degrees (56%), master's degrees (72%), and doctoral and first-professional degrees (80%) earned in New York State.

CICU member campuses enroll more than 466,000 students, including nearly 300,000 New York State residents. One in three (27%) New Yorkers enrolled full time at independent colleges and universities in the state comes from a family earning less than $40,000 annually. And most (52%) African-American and Latino students who earn their bachelor's and graduate degrees in New York State are Independent Sector alumni.