Skip to main content
Upload Proof of Vaccination
Reminder: All students, faculty, and staff must be fully vaccinated against COVID-19 and upload proof as a condition of accessing College buildings (including the residence hall) during the 2021-2022 academic year.
Academics
June 16, 2010

Immigration, at its core, is a story of becoming. “Common Boundary: Stories of Immigration,” the new collection of 29 works of prose and poetry edited by St. Francis College English Professor Gregory F. Tague, explores this theme of immigration, including international adoption, with stories full of candor, humor and insight.

“Without question, this is a book that will touch you in many ways as it hits home for virtually all of us, whoever we are, wherever we are,” said Professor Tague, a Pushcart Prize nominee. “These stories might seem timely because of what you read in the newspaper today, but their ability continually to intrigue us and constantly pull us back to take another look at our origins makes them timeless.” 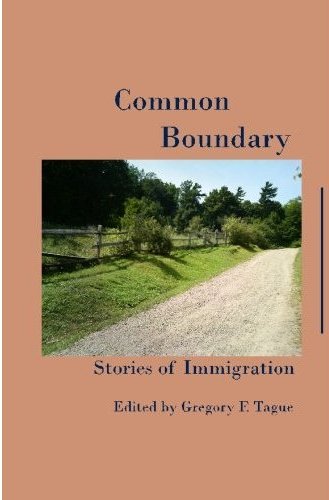 Common Boundary, published by Editions Bibliotekos, also benefits from the work of others at St. Francis College. Senior English major Kristen Morale proofread the book. Director of the Academic Enhancement Center Mitch Levenberg contributed the story, “The Plain Brown Envelopes,” which conjures both the wit of Woody Allen and absurdity of Franz Kafka while English Professor Jason Dubow writes in the Foreword:

“This book is really an anthology of anthologies: a collection of stories in which the old inextricably blends with the new, in which the tensions between what has been lost and what can be gained are grappled with (but, inevitably, not resolved), and in which the human capacity to imagine a future and make it real (more or less) is explored from a variety of different perspectives. Here’s the essential question: now that I am no longer there but here, Who am I? The answers, the stories – various, contingent, authentic – have made me, in a Whitman-esque sense, ‘larger,’ and they will you too. And so, when you’re done reading, ask yourself: Who now am I?”

The collection begins with “How He Made It Across,” by Patty Somlo, a classic tale of odyssey, and ends with “Blue Painted Field” by Tim Nees, a somewhat abstract story that brings together the operative metaphors about immigration from all the other stories in the book: loneliness, alienation, self-questioning, doubt, and uncertainty about the past and future.

In the middle are stories like Nahid Rachlin’s “What We Call Home,” a subtle and masterfully-told story of a mother’s difficult decision, after she had come to America to be with her son and daughter, to return to Iran and be with her sister. There are also pieces that are closer to creative non-fiction or memoirs, that candidly explore what it means to be an immigrant as well as issues of national identity by authors Omer Hadžiselimovic, M. Neelika Jayawardane, Azarin A. Sadegh, and Rewa Zeinati.

Other contributions go back in time to look at immigration or tackle the subject with humor. Several poet contributions also make the collection.

“A culture is a country’s language, its customs, and the collective thinking or attitude of the people,” writes Publisher Fredericka A. Jacks in the Preface. As those attiudes shift, it, “represents a paradox: on the one hand, there is an attempt to accommodate someone from another country; on the other hand, the immigrant person is always perceived as something foreign. There’s a common boundary – being part of and yet being apart from others.”

Professor Tague has authored and edited numerous books including: as author, Ethos And Behavior: The English Novel from Jane Austen to Henry James (Academica Press, 2008); as co-editor and contributor, Origins of English Dramatic Modernism, 1870-1914 (Academica Press 2010); and as author, Character And Consciousness (Academica Press 2005). He also publishes The Association for the Study of Ethical Behavior in Literature Journal.