The maintenance is scheduled to take place on the following days: June 21, June 22, July 11, July 13, August 1, August 3, August 16, and August 17. If you experience any problems accessing any of these applications during these dates, please understand the application may be down for migration. SFC IT will be sending out notifications when systems are back online. Thank you for your support and patience during this process.
Academics
February 11, 2010

When most people think about the major battles that brought victory to America in the Revolutionary War they tend to look south of New York, but St. Francis College Professor Richard Berleth tells us in his new book, Bloody Mohawk: The French and Indian War & American Revolution on New York’s Frontier (Black Dome Press) that those battles may never have been fought if not for the pivotal, fierce and oftentimes overlooked frontline fighting that continued in New York State.

“By not holding this inland waterway, America might have lost the Revolution, as well as much or all of the then poorly defined province of New York,” said Communications Arts Professor Berleth who began his intensive research into this story more than 15 years ago. 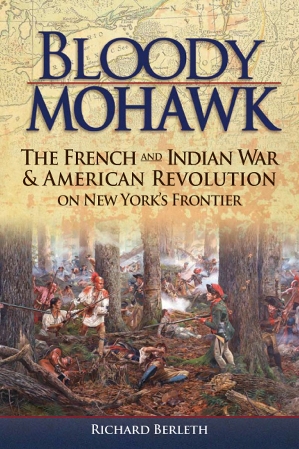 Bloody Mohawk is a sweeping historical narrative that chronicles instrumental events from the Bloody Morning Scout and the massacre at Fort William Henry to the disastrous siege of Quebec, the heroic but lopsided Battle of Valcour Island, the horrors of Oriskany, and the tragedies of Pennsylvania’s Wyoming Valley massacre and the Sullivan-Clinton Expedition’s destruction of the Iroquois homeland in western New York State. Caught in the middle of it all was the Mohawk River Valley.

“Loss—not just loss of life, but loss of the common stuff that holds humanity together—scarred the survivors and shaded the recollections they left to posterity. Loss is what gives the wind in the valley its special remorsefulness, the fog and lake-effect snow its isolating loneliness. Something happened here that was more intense, more shattering, than the ordinarily sorrowful consequences of war,” said Dr. Berleth.

Richard Berleth received his PhD from Rutgers University in 1970 and has taught in the Communication Arts Department at St. Francis College for 25 years. Previously he was a managing editor for Time/Life Books, a marketing manager for McGraw-Hill, and a senior vice president at Simon & Schuster. His other books include The Twilight Lords: An Irish Chronicle, The Orphan Stone: The Minnesinger Dream of Reich, Samuel’s Choice (children’s) and Mary Patten (children’s).