The maintenance is scheduled to take place on the following days: June 21, June 22, July 11, July 13, August 1, August 3, August 16, and August 17. If you experience any problems accessing any of these applications during these dates, please understand the application may be down for migration. SFC IT will be sending out notifications when systems are back online. Thank you for your support and patience during this process.
Academics
February 23, 2010

Symposium: Journalism in the Age of the Internet

A distinguished collection of journalists and media experts came together at St. Francis College on Tuesday, February 23 in Founders Hall for the symposium: Journalism in the Age of the Internet, co-hosted by St. Francis and the Manhattan Institute. (Watch the Internet Symposium 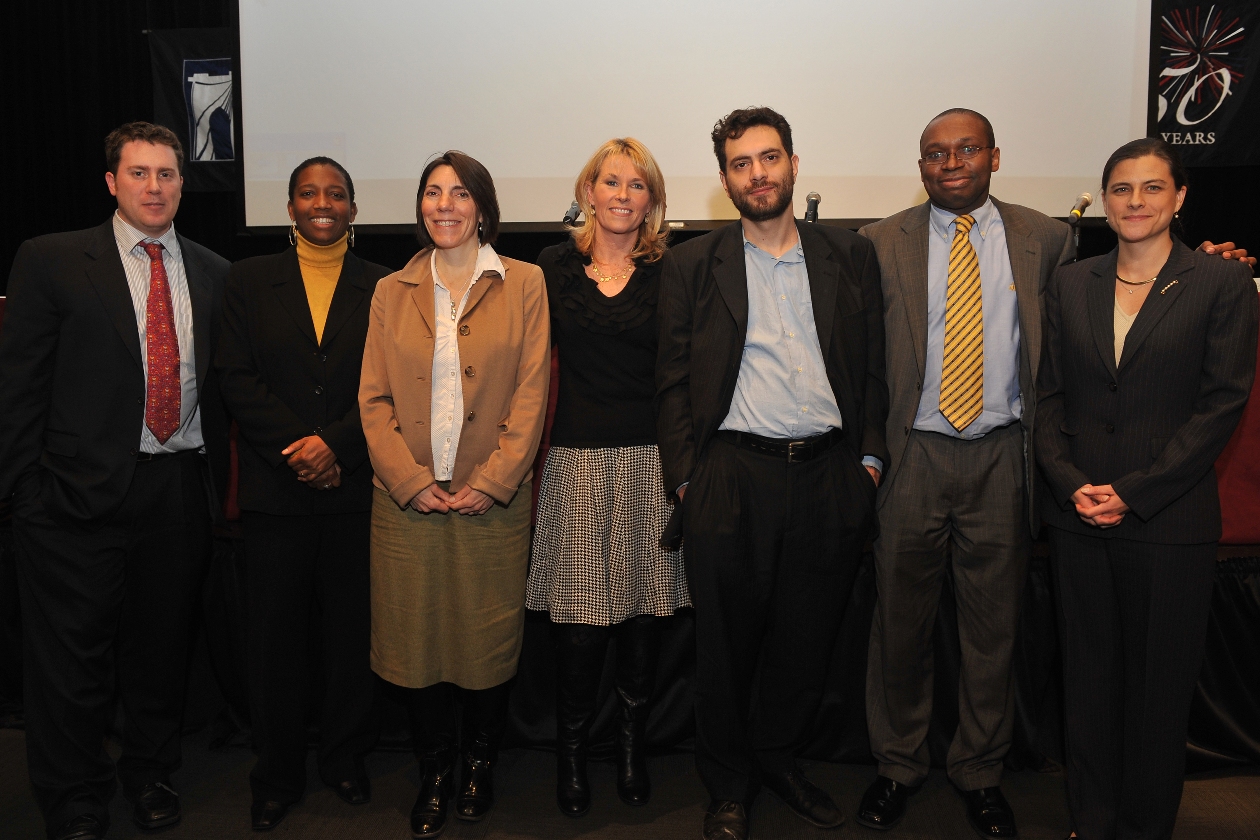 After a welcome from St. Francis College Chancellor Frank J. Macchiarola ’62, Lindsay Young Craig, Manhattan Institute Vice President of Communications & Marketing, who moderated the discussion, put the question into context. She showed that more people now get their news on the internet than newspapers and that the internet now even rivals TV as the most popular news source for people younger than 30.

During the panel, New York Post Editorial Writer Robert George talked about the internet and his paper in a historical context, pointing to late 19th and 20th century newspapers that were competing with about a dozen other daily newspapers. “They couldn’t take this laid back, quiet ‘objective’ take. It had to be a punch to the gut,” said George. He added that the New York Post and many internet sites continue the tradition by offering a “passionate, pugnacious and personal” point of view that may be subjective, but is honest.

Politico.com Editor Harry Siegel discussed the changing landscape that has come about because of the internet. He spoke about the ability to cater to very specific niches and publish to play off the motto of The New York Times, “All the news that’s of interest to a particular readership.” Siegel went on to lament one of the bigger casualties of the internet era, long form journalism. He said the rapid turnaround and always on news cycle that the online audience demands leaves no room for in depth work.

Lead Reporter and Columnist for Politico.com Ben Smith focused on how internet sites were able to generate major news stories, even from stories that were clearly fabricated. He pointed to one untrue rumor that claimed Michelle Obama had uttered a slur. He said, the denial of that story was carried all over the web and even on the front page of the New York Times, even though the story was “pushed entirely by people, who if you just read their blogs were clearly out of their minds,” said Smith who added that during the Presidential campaign, “Most of the threats to Obama came not from his opponents but from these nether regions of the internet.” At the same time, he said that online readers are becoming more educated and sophisticated about the news they read on the web and are better able to weed out sensationalism.

Bringing economic fundamentals to the conversation, Hunter College Professor of Economics Lisa George talked about how by lowering the cost to put together and distribute content, the internet has changed the fundamentals of media markets. She said that now, there are more voices presenting news with more ways that people can access that news, which “frees up the link between geography and news” and gives people the chance to find more “viewpoint diversity.” She argues, however, that there is still a role for media firms. Their new responsibility is to find specific experts in various fields and match them to the market that wants to learn about that expertise.

WABC Director of Community Affairs Saundra Thomas said that in her conversations with people she often fields questions about how we learn about our culture and histories. She said that mainstream media has been cut out of that process because people are getting the information from each other. “What I find exciting right now is the consumer is the producer,” said Director Thomas adding that the grass roots nature of the internet is pervasive in many communities and helping to fill a need so that mainstream media no longer needs to.

Coming to the panel immediately after her appearance on the 6:00pm news, WABC Anchor Diana Williams pointed out that predictions of the end of old media are premature because most content still comes through traditional media. Williams said she is a strong supporter of the way the industry has been changed by the web; noting that it has both opened up journalism to countless more people and at the same time given a much broader audience to journalists already practicing. As far as practical affects, Williams said that her newsroom no longer holds stories exclusively for TV newscasts but will put the stories on the web immediately. She also cautioned about the downside of the internet, “A lot of us in the business can get lazy. We can Google everything. We don’t have to pick up the phone as much and that’s a danger because you really have to know what your sources are on the internet.”

The symposium was put together by Visiting Professor Dr. Fred Siegel, who is currently on sabbatical from Cooper Union for Science and Art and is a senior fellow at the Manhattan Institute and contributing editor to City Journal.

This is the third panel organized by Professor Siegel and co-hosted by St. Francis College and the Manhattan Institute, the first two were Can New York State Government be Reformed? and Keeping New York in the Black, Our Current Fiscal Woes In Light Of The 1975 Fiscal Crisis.