Skip to main content
Upload Proof of Vaccination
Reminder: All students, faculty, and staff must be fully vaccinated against COVID-19 and upload proof as a condition of accessing College buildings (including the residence hall) during the 2021-2022 academic year.
Academics
March 3, 2015

The Good Counselor - Live at SFC

"I wrote this play out of my concern for the ways mother's feet are held to the fire both in the home and in the court of law," says Professor Grant. "I was brought up in a home where I watched my mother struggle to raise eight children with limited resources. It seemed we expected her to perform the miraculous for her children without expending the least amount of energy on herself. We were tough on our mother! And I see this attitude in other homes, in our popular culture and most perniciously in judicial systems."
The Good Counselor tells the story of a public defender's attempt to mount a defense for a woman accused of killing her baby. As the argument spills over from the courtroom into the community, the defense lawyer must come to terms with his preconceptions about the capacities of mothers. 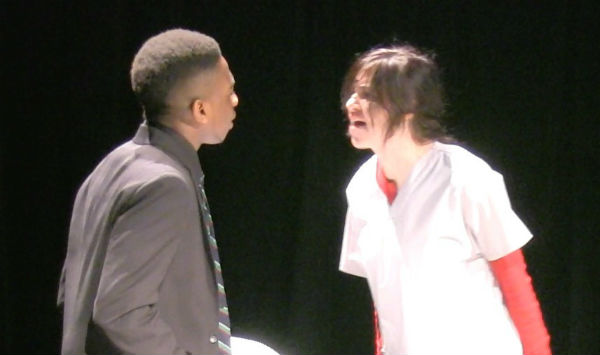 Professor Grant continues, "Unlike many other developed countries, in America there is no comprehensive federal legislation that requires courts to consider the particular stresses of pregnancy and lactation when assigning maternal culpability in the injury or death of a child. While the play examines a mother facing charges of infanticide, I hope audiences will reflect on the many crises of motherhood with rational consideration and compassion."
After the March 3, 2015 performance Professor Grant talked about laws surrounding motherhood with St. Francis Accounting and Business Law Professor Miriam Salholz.

The play received the Jerry Kaufman Award, the Premiere Stages Award and the American Theater Critics Association Citation for Best New American Play. The New York Times' Anita Gates writes that The Good Counselor, "leave(s) us with a mystery that is as deep as the leap into parenthood itself ... excellent work."