Skip to main content
Upload Proof of Vaccination
Reminder: All students, faculty, and staff must be fully vaccinated against COVID-19 and upload proof as a condition of accessing College buildings (including the residence hall) during the 2021-2022 academic year.
Academics
October 9, 2012

Wading Into the Cesspool of a Tabloid Society

Growing up on the wrong side of Beverly Hills, acclaimed author Bruce Wagner has been a witness to and a part of tabloid culture his entire life. But it was the recent hyper-focus and the seemingly unquenchable thirst of the culture for star gossip that drove him to write his new novel, Dead Stars, which he read from at St. Francis College on October 9. (Watch the Reading of Dead Stars) 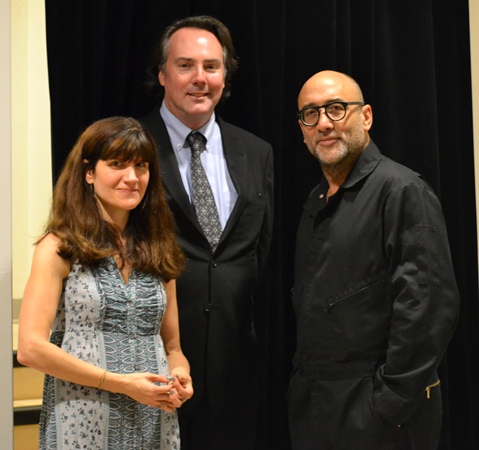 “I write a lot about contemporary culture and in that way I like to look deep into the zeitgeist, the spirit of where we’re heading and where we are now,” said Wagner.

That journey drove him to take a hard look at the impact of the media obsession with everyone from pop musicians to reality TV starts. The portion Wagner read focused on a young couple obsessed with the glamour of show business and lost under its spell.

He said Los Angeles has, “lost its allure because of the spectacle that L.A. has become. It’s the ground zero of celebrity obsession. It’s repulsive.”

After the reading, Wagner spoke with students at length about motivations for the book and the art of writing.

The reading was organized by Sociology and Criminal Justice Professor Emily Horowitz and sponsored by the Departments of Communication Arts and American Studies with the Office of the Provost.

Bruce Wagner is the author of Memorial, The Chrysanthemum Palace (a PEN/Faulkner fiction award finalist), Still Holding (a New York Times Notable Book of the Year), I'll Let You Go, I'm Losing You, and Force Majeure. He has written essays and op-ed pieces for The New Yorker, The New York Times, Art Forum and Vanity Fair. Wagner has also written essays and prefaces for books by photographers William Eggleston and Manuel Alvarez Bravo, painters Ed Ruscha and Richard Prince. With Oliver Stone, he co-executive produced Wild Palms, the mini-series Wagner created, based on a cartoon that he wrote for Details magazine. He was the executive producer and co-writer (with Ullman) of Tracey Ullman's State of the Union series on Showtime.