The maintenance is scheduled to take place on the following days: June 21, June 22, July 11, July 13, August 1, August 3, August 16, and August 17. If you experience any problems accessing any of these applications during these dates, please understand the application may be down for migration. SFC IT will be sending out notifications when systems are back online. Thank you for your support and patience during this process.
Academics
April 28, 2012

Father André Cirino, OFM, Franciscan author and pilgrimage guide, spoke about the seldom discussed heroics of three men from the city of Assisi – one who helped save the city from destruction and the other two saving the lives of between 250 and 300 Jews from the Holocaust - for the 15th Annual Yom Hashoah Holocaust Remembrance Day event on April 28 at St. Francis College. (Watch the lecture)

The event brought together two important programs that were begun by Chancellor of St. Francis, Frank Macchiarola. As president of the College he initiated the annual observance of Yom Hashoah. He also provided the opportunity for Franciscan Brothers, St. Francis faculty, administrators and staff to travel on an Assisi Pilgrimage each year; the College has sponsored the trips of about 50 people so far. After a welcome from Dr. Macchiarola, Brother Thomas Grady, director of Campus Ministry and a long time friend of Father André offered an opening prayer. 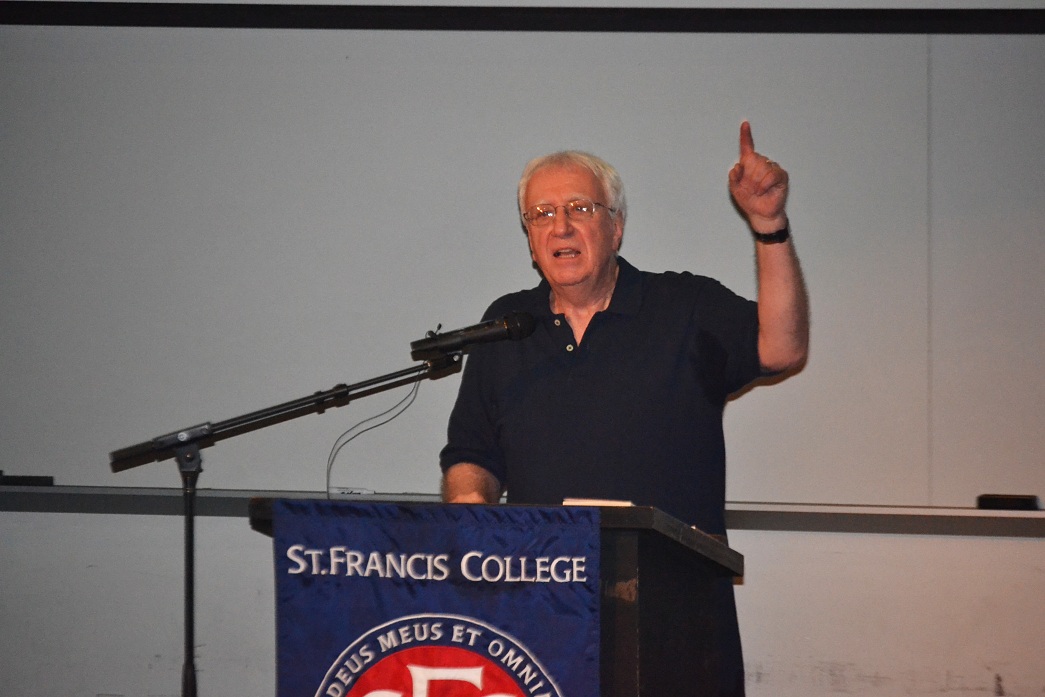 Father André (who, with Josef Raischl, SFO, co-authored and co-edited Three Heroes of Assisi in World War II, Editrice Minerva) said that the topic, “has excited me from the first time I set foot in Assisi; to know that Assisi participated somehow during World War II in preserving life for people, predominantly Jewish people who came to Assisi. “

German Commander Colonel Valentin Müller, Bishop of Assisi Giuseppe Nicolini and Don Aldo Brunacci are the three heroes. It was all made possible when Colonel Müller, with the support of Bishop Nicolini and the Vatican had Assisi declared a ‘hospital city.’ This meant the Allies would not bomb the city and destroy its historical structures as they had with the bombing of another Italian treasure, the Abbey at Monte Cassino. Father André said Colonel Müller’s actions were treasonous and put his life in danger because he declared Assisi a hospital city without a response from Berlin to make the designation.

About the same time as this safe haven was established, a letter from the Vatican, sent by Bishop Giovanni Montini (later Pope Paul VI), asked Bishop Nicolini to do what he could to offer a safe haven to refugees, especially Jewish refugees. Bishop Nicolini enlisted Don Aldo and the two went about creating false identification papers and placing people in convents, monasteries, private houses and hotels within the city walls. Don Aldo was the “runner.” After false identity cards were printed in Assisi, Don Aldo would bike across the valley to Perugia to get them officially stamped. In the earlt morning, he rode back, hitching his bike to the German military convoys, carrying those false papers, so he could make his seminary lectures in the morning

Father André told about other close calls in Assisi, including Don Aldo turning himself in to Italian Neo-Fascists before they could go into his apartment and discover a Jewish family waiting to be relocated and how they buried one Jewish woman under an Italian name, her coffin saluted by Nazi soldiers on the way to burial.

St. Francis College honored Don Aldo Brunacci in 2007, one of many awards he received including from Yad Vashem, the Israeli Holocaust Museum, which proclaimed him a ‘Righteous Gentile’ along with the Bishop of Assisi.