The maintenance is scheduled to take place on the following days: June 21, June 22, July 11, July 13, August 1, August 3, August 16, and August 17. If you experience any problems accessing any of these applications during these dates, please understand the application may be down for migration. SFC IT will be sending out notifications when systems are back online. Thank you for your support and patience during this process.
Academics
December 2, 2016

A Celebration of Chinese American Art & Photography in NYC

More than 100 people enjoyed Chinese music and calligraphy, Dim Sum, and artwork at the opening reception for A Celebration of Chinese American Art & Photography in NYC, a month long exhibition featuring photographs by Psychology Professor Uwe Gielen and art work by Linda Moses at St. Francis College on December 2. 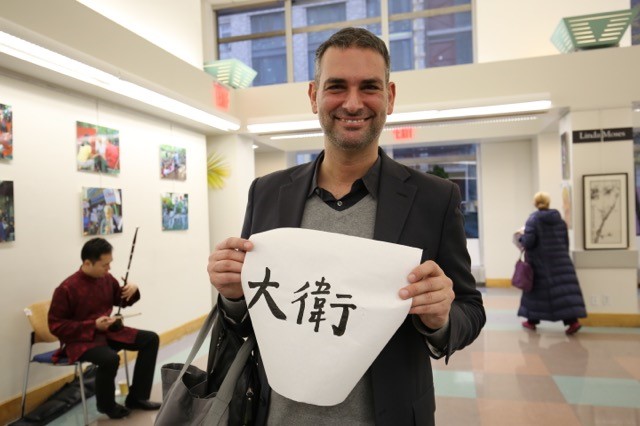 "This show marks the evolution of my work, using innovative approaches and incorporating Asian aesthetics into Western art," said Linda Moses, whose pieces make up half the show.

A Celebration of Chinese American Art & Photography in NYC runs until December 30.

Professor Gielen has spent the last several years chronicling the lives of Chinese American youths for the book, Growing up Chinese in New York City. Over the course of collecting those stories, he trained his camera lens on the vibrant culture of New York's Chinatowns including lions, dragons, snake goddesses, and other creatures that make their appearance during Chinese Lunar New Year Parades and in Chinese Opera performances.

In addition to the exhibition, the reception featured a calligraphy demonstration by Yvonne Kwok, live Chinese erhu music by Andy Lin, and Dim Sum from Oriental Garden restaurant. Guests also had their names painted in Chinese calligraphy and had a chance to use a Chinese chop (seal).

As Linda Moses was approaching retirement after a career as a psychologist she discovered Chinese brush painting. "Moving a brush loaded with sumi-e ink on rice paper was thrilling. So was capturing the essence and energy of my subject matter spontaneously. The show honors the two most important mentors in my artistic life, Jin Guang Yu and Nicki Orbach."

Linda Moses, Ph.D. was the Director of The Churchill School for Learning Disabled Children, their former school psychologist and a psychologist in private practice for over 35 years.

Dr. Uwe Gielen grew up as a refugee in Germany, received a Ph.D. in Social Psychology from Harvard University, and presently serves as the Executive Director of the Institute for International and Cross-Cultural Psychology at St. Francis College.

A Celebration of Chinese American Art & Photography in NYC runs until December 30.

Brooklyn Heights, N.Y. Since its founding, the College has pursued its Franciscan mission to provide